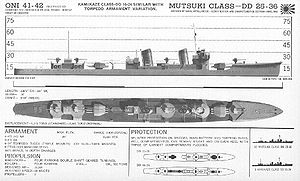 With the imposition of the Washington Naval Treaty limiting the number and size of capital warships, increased emphasis was placed by the Imperial Japanese Navy on the quantity and firepower of its destroyer fleet to counter what was perceived to be the growing threat from the United States Navy. The Mutsuki class destroyers were an improved version of the Kamikaze class destroyers and were ordered under the 1923 fiscal budget.[5]

Along with the Minekaze and Kamikaze classes, the Mutsuki class ships formed the backbone of Japanese destroyer formations throughout the twenties and thirties. The Minekaze and Kamikaze classes were withdrawn from front line service and reassigned to secondary duties towards the end of the 1930s, but the Mutsuki were retained as first line destroyers due to their range and their more powerful torpedo armament.[6] All saw combat during World War II, and none survived the war.

Initially, the Mutsuki class ships had only hull numbers due to the projected large number of warships the Japanese navy expected to build through the Eight-eight fleet plan. This proved to be extremely unpopular with the crews and was a constant source of confusion in communications. In August 1928, names were assigned.[7]

The Mutsuki class destroyers were based on the same hull design as the previous Kamikaze class, except with a double curvature configuration of the bow, a feature which became a standard in all later Japanese destroyers.

The Mutsuki class was the first to be fitted with the newly developed 24 inch torpedoes, with greater range and larger warhead than previous torpedoes in the Japanese inventory. Originally Type 8 torpedoes were carried, arranged in two triple mountings. These were later replaced with the famous Type 93 "Long Lance" oxygen-propelled torpedoes during World War II.

In September 1935, many ships in the navy were severely damaged by a typhoon while on training exercises, in what was later termed the "Fourth Fleet Incident", including a number of the Mutsuki class destroyers, which had several plates buckled and bridges wrecked. During 1936-37 the Mutsuki class ships were retrofitted with a strengthened, more compact, bridge, with redesigned watertight shields on the torpedo mounts. With the new shields the torpedoes could be worked in all weather conditions thus extending the useful life of the class.[8]

From 1941-1942 the Mutsuki class destroyers were refitted with the 4.7"/45 main guns reduced to two single mounts and ten Type 96 25 mm AT/AA Guns added. The minesweeping and minelaying equipment was removed and replaced with four depth charge launchers, with 36 depth charges.

In June 1944, the surviving vessels were again refit, with the number of Type 96 25 mm antiaircraft guns increased to twenty, and an additional five Type 93 13 mm AA Gunss also installed.

The Mutsuki class formed the 5th and 6th Destroyer Squadrons. Mutsuki and Kisaragi participated in the Battle of Wake Island at the start of the war, during which time Kisaragi was lost due to aircraft bombardment. The remaining eleven vessels participated in the invasions of the Philippines and Netherlands East Indies. In the subsequent Solomon Islands campaign surviving ships were exposed to considerable danger as fast transports in “Tokyo Express” missions in trying to re-supply island garrisons. Mutsuki, Nagatsuki, Kikuzuki, Mikazuki and Mochizuki were lost due to air attack in various battles in the Solomons.[9]

Surviving vessels participated in the New Guinea campaign, mostly in the role of “Tokyo Express” transports. Yayoi was lost in an air attack off New Guinea and Fumizuki in Operation Hailstone at Truk. In the final stages of the war, Uzuki was lost to US PT-boats and Satsuki and Yūzuki to an attacks and Minazuki to submarine torpedoes in the Philippines.

None of the Mutsuki class destroyers survived the war.[10]