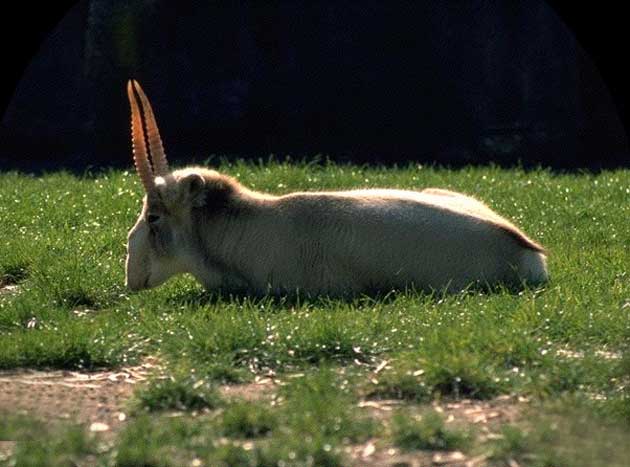 The Saiga ("Saiga tatarica") is an which originally inhabited a vast area of the n zone from the foothils of the Carpathians and into and . Today they are found only in a few areas in (Russia), , and western .

The Saiga typically stands 0.6-0.8 meters at the shoulder and weighs between 36 and 63 kg. Their lifespan ranges from 6 to 10 years. Males are bigger than females and are the only sex to carry horns. The horns have some value as Chinese traditional medicine and for that reason Saiga are now endangered by poaching. The Saiga is recognizable by an extremely unusual, over-sized, and flexible, nose structure. The nose is supposed to warm up the air in winter and filters out the dust in summer.

Saigas form very large herds that graze in semi-desert steppes eating several species of plants, including some that are poisonous to other animals. They can cover considerable distances and swim across rivers, but they avoid steep or rugged areas. The mating season starts in November, when stags fight for the possession of females. The winner leads a herd of 5-50 females. In springtime the mother gives birth to, in two thirds of all cases two, or in one third, one single foal.

During the the Saiga occurred from the through and the into and the . At the beginning of the 18th century it was still distributed from the shores of the , the Carpathian foothills and the northern edge of the Caucasus into and Mongolia. After a rapid decline they were nearly completely exterminated in the 1920's, but they were able to recover and by 1950 there where again two million of them in the steppes of the USSR. At one point, some conservation groups, such as the , encouraged the hunting of this species as its horn was presented as an alternative to that of a .

Currently only the Moscow and Cologne zoos keep saigas. has had them in the past. in northern Siberia plans to introduce the species.