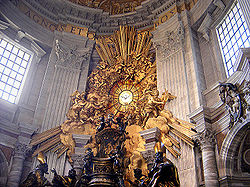 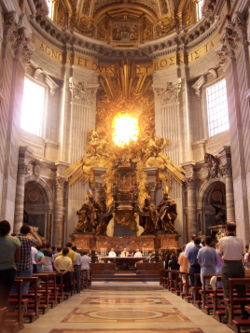 The Cathedra Petri, seen from behind the High Altar of St. Peter's

The Chair of Saint Peter is a relic conserved in St. Peter's Basilica, enclosed in a gilt bronze casing that was designed by Gian Lorenzo Bernini and executed 1647-53.

The chair of a bishop is a cathedra. The cathedra in Saint Peter's Basilica was once used by the popes. It was therefore often thought to have been used by Saint Peter himself, but was in fact a gift from Charles the Bald to the Pope in 875.[1]

Like many medieval reliquaries it takes the form of the relic it protects, in this case a chair. Symbolically, the chair Bernini designed had no earthly counterpart in actual contemporary furnishings: it is formed entirely of scrolling members, enclosing a coved panel where the upholstery pattern is rendered as a low relief of Christ giving the keys to Peter. Large angelic figures flank an openwork panel beneath a highly realistic bronze seat cushion, vividly empty: the relic is encased within.[2] The cathedra is lofted on splayed scrolling bars that appear to be effortlessly supported by four over-lifesize bronze Doctors of the Church. The cathedra appears to hover over the altar in the basilica's apse, lit by a central tinted window through which light streams, illuminating the gilded glory of sunrays and sculpted clouds that surrounds the window. Like Bernini's Ecstasy of St Theresa, this is a definitive fusion[3] of the Baroque arts, unifying sculpture and richly polychrome architecture and manipulating effects of light.

Jesus' words to Peter in Matthew 16:18–19, "You are Peter, and upon this Rock, I will build my Church and the gates of Hell shall not prevail against it. To you have I entrusted the keys of the Kingdom of Heaven and whatever you bind on earth will be bound in heaven, and whatever you loose on earth will be loosed in heaven", are inscribed in Latin in the apse, within which is placed Bernini's monument enclosing the wooden chair, both of which are seen as symbolic of the authority of the Bishop of Rome as Vicar of Christ and successor of Saint Peter.

Early martyrologies indicate that two liturgical feasts were celebrated in Rome, centuries before the time of Charles the Bald, in honour of earlier chairs associated with Saint Peter, one of which was kept in the baptismal chapel of Saint Peter's Basilica, the other at the catacomb of Priscilla.[4] The dates of these celebrations were January 18 and February 22. No surviving chair has been identified with either of these chairs. The feasts thus became associated with an abstract understanding of the "Chair of Peter", which by synecdoche signifies the episcopal office of the Pope as Bishop of Rome, an office considered to have been first held by Saint Peter, and thus extended to the diocese, the See of Rome. Though both feasts were originally associated with Saint Peter's stay in Rome, the ninth-century form of the Martyrologium Hieronymianum associated the January 18 feast with his stay in Rome, and the February 22 feast with his stay at Antioch.

The two feasts were included in the Tridentine Calendar with the rank of Double, which Pope Clement VIII raised in 1604 to the newly invented rank of Greater Double. In the year 1960 Pope John XXIII removed from the General Roman Calendar eight feast days that were second feasts of a single saint or mystery: one of them was the January 18 feast of the Chair of Peter.[5] The February 22 celebration became a Second-Class Feast. This calendar was incorporated in the 1962 Roman Missal of Pope John XXIII, whose continued use as an extraordinary form of the Roman Rite is authorized under the conditions indicated in the motu proprio Summorum Pontificum In the new classification introduced in 1969 the February 22 celebration appears in the Roman Calendar with the rank of Feast. Those traditionalist Catholics who do not accept the changes made by Pope John XXIII continue to celebrate both feast days: "St Peter's Chair at Rome" on January 18 and the "Chair of St Peter at Antioch" on February 22.