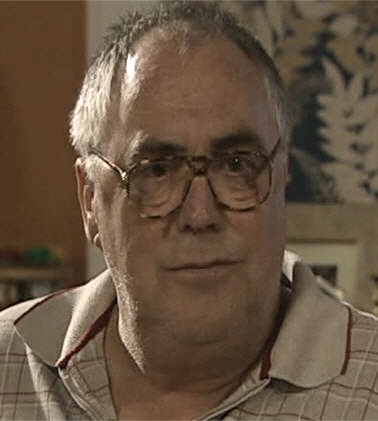 John Harold "Jack" Duckworth, played by , is one of the longest running characters on the British television "".

Jack was born into a dysfunctional family home in . After drifting through a series of dead-end jobs which he found very dissatisfying, he found his dream job when he started to work on a travelling fair, calling himself Ronnie.

It was while he was working The Waltzer (a British fairground ride) that he met Veronica Burton, who preferred to be known as Vera as it was "... more romantic." Jack was horrified when Vera told him that she was pregnant; however, he reconciled himself to the morality of the day and agreed to marry her. By the time he learned the truth, that she wasn't pregnant and it was a false alarm, he realised that he really did want to marry her, despite mourning the loss of his freedom.

Jack first appeared in the year 1977 and over the next four years he made frequent appearances as an extra. In an episode on 28 November 1979, he made his mark on the street by embarrassing Vera with his common ways at Gail Potter's marriage to . Prior to this, actor could often be seen as an extra in the , playing darts. The production team of "Coronation Street" have since reconciled this by saying he was the same character. He became a regular character from an episode on 18 May 1981 and moved into the street in the year 1983, to the dismay of his new neighbours.

During a trip to the , Jack confessed to having lied at their wedding (by making a smudge on his year of birth to make it look like another number), and said he was two years older than he really was just to impress a young Vera. Since they were not legally married, they tied the knot in the famous Little White Wedding Chapel in Las Vegas.

The Duckworth marriage was always rocky due to their wayward son, Terry, and extramarital flings by both Jack and Vera. Jack once had an affair with the street's prolific man-eater , which she later regretted. He enrolled with a video dating agency, calling himself Vince St. Clair and adopted a white suit, gold medallion and phony trans-Atlantic accent. Vera, who also took part in the dating scheme, under the name of Carole Munroe, was shocked to see Jack's video. She pretended to meet him in the Rovers Return pub, wearing a ginger wig. This led to a classic confrontation; 'Carole Munroe' had been claiming to be a rich widow, which led Jack to say "You're no flamin' widow!" As Vera swiped Jack with her handbag she shouted "No! But I will be ten minutes after I get you home!"

Vera also had her fair share of lovers. She was tempted by a former romance in with the smarmy Lestor Fontaine, but realised she could never leave Jack. In the year 2000, when she believed she was about to die in an operation, she confessed to Jack through a goodbye letter that Terry may not have been his real son due to a fling early in their marriage. Jack confessed to that he knew of the affair at the time (and put an end to it by beating up her lover unknown to Vera), but also knew that Terry "was" his son, as he reminded him too much of himself.

The Duckworths have three grandchildren: Paul (by Andrea Clayton), Tommy (by Lisa Horton), and Brad (by Tricia Armstrong), but they hardly see any of them due to Terry's reluctance to be a father. Paul was conceived in the mid-1980s, but the teenage fled with her family to escape Terry. In the early 1990s, Terry made his then girlfriend, Lisa Horton, pregnant. He was imprisoned but vowed to marry her, and the pair were delighted when Terry was allowed out of prison (although handcuffed) for one day only for his wedding. They duly married but the groom escaped from the police and went on the run. He was later re-captured in a supermarket car park, where he had lingered too long in order to tell Lisa how much he loved her and that the flight from the wedding was just opportunistic and didn't reflect on their relationship. However, she knew that leopards never change their spots, that Terry was a rogue and always would be, so she broke off their relationship and, despite being pregnant, set up home with at no. 6. Vera turned against her instantly, even accusing her of being the reason for Terry's misfortune. Jack however knew that Terry would never stand by his family, but felt duty bound to stand by his wife in their shunning of Lisa. She gave birth to a boy, Tommy, and everything seemed perfect for their surrogate factory, until, one night, Lisa was leaving the Rovers and dropped her change in the middle of the street. While bending down to retrieve it, a car turned the corner and fatally struck her.

Following this tragedy, Tommy went to live with his paternal grandparents, but Jack and Vera found it hard to cope, particularly financially. A callous Terry then sold his son to his maternal grandparents, the Hortons of Blackpool. The scenes where Vera begs Terry to change his mind and her subsequent break down when he refuses, are amongst the most powerful ever seen in the programme. Jack's response was more straightforward and uncompromising - he punched Terry on the jaw.

A with barmaid Tricia Armstrong resulted in baby Brad, but Terry didn't want to know, and Tricia left with a new lover. The Duckworths have tried several times to win custody of Thomas from the Hortons, but to no avail. They continued to see him occasionally, but relations remain strained.

Jack and Vera calmed down in their later years, changing from the 'neighbours from hell' characters of the early days into a maternal and avuncular figure. They have become surrogate parents for (whose mother was in prison for violence), and Jack considers him to be more his own son than Terry ever was. They were a down-to-earth northern couple and comic double act, in the great tradition. Jack adored his pigeons, though Vera could not stand them, and once tricked him into believing that she had cooked him a pigeon pie. Most recently, Jack agreed to sell his dead body for a certain sum of cash to an artist who enjoys painting stuffed humans, so he could buy Vera a present. When Vera discovered this, she argued with the woman, who then turned up, inspired by Vera. They agreed to both pose nude for the artist, but on condition that they would be buried as normal. The Duckworths celebrated their Golden Wedding anniversary with a party at the Rovers in the August 2007 period.

Vera died suddenly in an episode on 18 January 2008 in the armchair at her house, where she was discovered by a devastated Jack. They had been planning to move to at the time, but Vera's death prompted Jack to call off the move and remain in Weatherfield. He still planned on selling the house to Tyrone and and eventually did so but still remained resident.

In an episode on 25 April 2008, Paul, his grandson confessed to the police to burning down Valandro's, 's restaurant. He also confessed to Jack who was disgraced with Paul and called him a "liar" and "his father's son".

* [http://www.whatsontv.co.uk/soaps/coronation_street/whos_who/jack_duckworth Profile of Jack Duckworth] at What's on TV