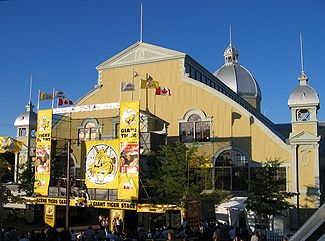 Ottawa SuperEX (officially the Central Canada Exhibition) is an eleven-day annual exhibition that takes places every August at Lansdowne Park in Ottawa, Ontario, Canada. The exhibition provides exhibits, entertainment and amusements indoors in the buildings on site and outdoors on the grounds. The Central Canada Exhibition Association operated a fair annually from 1888 until 2010, except during World War II. The fair is on hiatus due to plans to redevelop Lansdowne Park and the Association is planning to hold its next fair in 2012 at a new site.

Only a few buildings existed at the site at the time, including the first Grandstand, overlooking a dirt track and horse display area. This dirt track and horse display area has evolved into today's Frank Clair Stadium. The primary focus was on agricultural displays, but exhibits included manufacturer's exhibits from the beginning. Livestock was brought to the site and kept in sheds for the duration of the fair. Judging of farm crafts and baking was done, and is still done today.

The Exhibition has operated annually every year since, with the exception of several years during World War II , when the grounds were used by the Canadian military. In 1898, the Aberdeen Pavilion opened for displays. In 1903, the Coliseum opened for displays. In 1909 a new steel and concrete Grandstand was built at a cost of $100,000 to provide seating for nearly 10,000 people. The south side stands were built in 1960. Today's Civic Centre and Grandstand opened in 1967.

Over time, the Exhibition has reduced its agricultural exhibits to the point where today's exhibitions only hold a small exhibit in the Aberdeen Pavilion. Musical concerts take place outdoors on the field and indoors in the Civic Centre arena.

The Ex was cancelled for the year 2011 because of lack of venue. The exhibition was to move to Albion Road some time in the future but the venue would not be ready for August 2011. It is the first time the exhibition has been cancelled since World War II.[citation needed] The suspension of the Ex leaves its existence in question.[1] Organizers have said the ex will move to its new location on Albion Road in 2012. 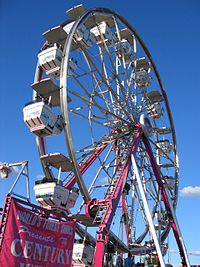 A highlight of the annual fair are the 'thrill rides.' These are set up on site by the rides provider, and dismantled after the fair is over. Ride safety is monitored by the Technical Safety Standards Authority of Ontario. Since 1997 World's Finest Shows, the former Conklin Shows of Brantford, Ontario, has provided rides, previously with Amusements of America.

Rides have been offered from the first year of the fair. 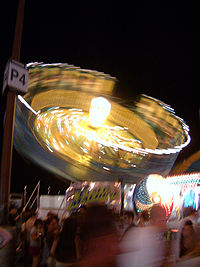 In August 1998, Jerome Charron, recent graduate of Ecole Secondaire Publique Charlebois, died in a bungee ride accident at the Ottawa Exhibition when he was hurled 40 meters into the air before plummeting to his death as his harness had detached. In February 2000, the firm responsible for the ride, Anderson Ventures, was fined $145,000 for this incident. Provincial inspectors had inspected the ride just 4 days before the incident and approved it, but did not see the strap because it was in a nearby box [1]