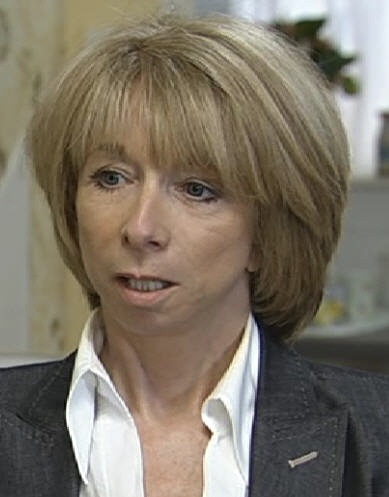 Gail Platt (née Potter; previously Tilsley and Hillman) is a long running on the British "" and is portrayed by making her first onscreen appearance on 15 July 1974. She is the daughter of and . [ [http://www.itv.com/Soaps/coronationstreet/castandcharacters/mtop/GailPlatt.html Coronation Street | Cast & Characters | M-P Cast & Characters | Gail Platt - ITV Soaps] ]

Gail Potter entered the series in an episode on 12 July 1974 as a friend of Tricia Hopkins. The character of Gail was only intended as a 'mate' for the Hopkins character,Fact|date=April 2008 but has remained in the programme since her debut.

Tricia moved away from Weatherfield, and lodged briefly with Gail at the corner shop, before they both moved into Elsie's former home at No.11 Coronation Street. In the year 1977, Elsie and Gail were joined at No. 11 by , and the trio of women would become one of the programme's most popular groups.Fact|date=April 2008

Gail married in an episode on November 28, 1979. This set off a fifteen-year feud between Gail and Brian's mother Ivy, who hated her new daughter-in-law. Gail and Brian had two children: son Nick (born in 1980) and daughter Sarah (born in 1987). Gail was originally unsure of the identity of Sarah's father, because she had had an affair with Brian's cousin, Ian Latimer, just before becoming pregnant. Brian when he found out had wanted Gail to have an abortion, which she refused point blank. The infidelity caused the break-up of the Tilsley marriage, but after paternity tests proved Brian to be baby Sarah's father, the couple reunited and remarried in the year 1988.

However, the marriage quickly deteriorated, and Brian and Gail had a massive argument one night as Brian was leaving to go out to a nightclub. They knew their marriage was over, however Brian vowed to fight for custody of Nick. The threat, however, was never carried out.

When Brian was killed in a nightclub scuffle in the year 1989, Gail became drawn to the much younger . The two became involved and soon Gail fell pregnant by him. Gail did not think it was fair for Martin to have a child at his age, and was about to have an abortion when Martin stopped her. Gail and Martin married in 1991, almost a year after she gave birth to her second son David. She allowed Martin to adopt her other children, but Nick changed his name back to Tilsley in order to benefit from the will of his grandmother, Ivy.

As Nick grew into his teens, he grew increasingly defiant towards his mother and Martin, so Gail eventually sent him away to to live with her brother Stephen. A mature Nick returned in the year 1997, but shocked his mother by marrying . Leanne and Gail would have a similar relationship to that of Gail and Ivy, but eventually Nick and Leanne divorced. Nick left for Canada again.

Martin was much younger than Gail and so was tempted by other women. He cheated on her with nurse Cathy Power, but Gail forgave him. However, his affair with Rebecca ended the marriage and they divorced in the year 2001.

Later in 2001 The character was to become central to one of the soaps most high profile plot lines in which episodes would go on to get viewing figures over 17 Million. [ [http://news.bbc.co.uk/1/hi/entertainment/tv_and_radio/2796201.stm BBC NEWS | Entertainment | TV and Radio | Street drama hits ratings high ] ] At first Gail grew closer to her good friend 's cousin . Smooth-talking Richard whisked Gail off her feet, and they married in 2002. But little did she know that her apparently perfect husband was actually a serial killer. He murdered several Weatherfield residents and tried to kill many others, including Gail's mother Audrey.

When Gail began to suspect that her husband was more than he seemed, she confronted him with her suspicions, even though her son had a fake tan. Richard confessed all of his crimes to Gail in a episode, admitting to the murders of and his ex-wife Patricia. He also revealed that he had tried to kill and Gail's mother Audrey and had left Rovers' landlord Duggie to perish. Gail also discovered that Richard was a serial con-artist. Absolutely horrified, Gail branded him 'Norman Bates with a briefcase' and proceeded to throw him out before informing the police of the real identity of the street serial murderer. Gail then reconciled with her mum Audrey.

Just as Gail began to get her life back on track, Richard returned to Weatherfield. He tied Gail up, along with her children and took them for the ride of their lives. Richard sent them flying into a canal in an attempt to kill them all. Gail and her children escaped unharmed, but Richard drowned. Gail later found out that Richard had left her in big debt, and all her money was gone as everything in their accounts' was frozen. Gail faced financial ruin and looked set to lose her house. However, Audrey saved the day when she used her life savings' to buy the house for Gail.

Shortly after Sarah's 13th birthday, Gail and Sarah made the discovery that Sarah was pregnant. Sarah was five months along and as a result it was too late for an abortion. Sarah would give birth to Gail's first grandchild, Bethany, in the June 2000 period.

From the early 2006 period until an episode on 21 May, Gail received cards apparently signed by deceased husband Richard, which caused her to become reliant on sleeping pills and drink. She contacted the police and wrongly believed that it was new boyfriend Phil who was behind the cards. Her relationship with son David was strained to the point of breakdown when it was finally revealed to be him sending the cards. [ [http://www.thesun.co.uk/sol/homepage/showbiz/tv/article904061.ece Coronation Street | David Platt | Jack P Shepherd | Old ladies should have ASBOs | The Sun |Showbiz|TV ] ] She marched him to the police to close the case of the Hillman cards for good, but didn't press charges. Gail forgave David and believed that he would keep in line, only to find out later on that he was playing truant. In the October 2006 period, the education officer visited Gail to suggest all the family have counselling for David's attitude. She also suggested that Gail should attend parenting classes.

On an episode on 2006, David unveiled Ivy Brennan's old diary, which revealed Gail’s planned abortion of David, and also exposed his Gran ' affair with . David ran away from home when Gail finally told him that he needed to start paying rent, but finally returned home with the police, after having lied to them that Gail was abusing him. The final straw for Gail was when her granddaughter swallowed an ecstasy tablet, left in her dolly's head by David. Bethany was sent to intensive care and Gail finally gathered the strength to tell David to leave home. David was distraught, but Gail remained strong and told him not to attend the wedding of Sarah and Jason.

On Sarah's wedding day, David drove his car into the canal where Richard drove. A distraught Gail was forced to wait for hours on news on whether he was alive or dead, and when he finally did arrive home, Gail swore to him she would never let the situation get so out of hand again.

In they year 2007 Stephen Reid, Gail's half brother, came to stay over Christmas. He offered David a job in Milan and David immediately accepted. However, because he spoiled her wedding day, Sarah vowed revenge and planted ecstasy tablets in his drawer at the salon. Audrey found them, and Gail told David that he was not going to Milan. Sarah was offered the job and left with Jason and Bethany, however confessed what she had done to Jason, who left her and returned to Weatherfield.. He told Gail everything and she was shocked.

In an episode on 3 March 2008, Tina - David's girlfriend - revealed that she was pregnant with David's baby. Gail told Tina that David did not have to know and offered to pay for a termination, which Tina accepted. When David discovered their deception, he pushed his mother down the stairs in a fit of anger, leaving her hospitalised and suffering short term amnesia. [ [http://www.thesun.co.uk/sol/homepage/showbiz/tv/soaps/article1428300.ece The Sun: Platt's torn it] ] [ [http://www.thesun.co.uk/sol/homepage/showbiz/tv/soaps/article871845.ece Coronation Street | David Platt shoves mum Gail down the stairs after her meddling | The Sun |Showbiz|TV|Soaps ] ] [ [http://www.digitalspy.co.uk/soaps/a90648/in-pictures-david-shoves-gail-down-stairs.html?id=90648 Soaps - News - In Pictures: David shoves Gail down stairs - Digital Spy] ] Gail eventually remembered who pushed her, that it was her own son. [ [http://latestnews.virginmedia.com/news/entertainment/2008/03/31/corries_david_on_the_rampage Corrie's David on the rampage? - News - Virgin Media] ]

Ted Page, Gail's long lost father, recently got in touch with her mother. Gail found out about this and was angry that she was not told. Recently, she has arranged to meet up with Ted after Ted discovered he was a father, grandfather and great-grandfather. Actress Helen Worth is fewer than eight years younger than actor Michael Byrne, who plays her father Ted.In an episode on 12 May 2008, Gail met up with Ted, who was shocked when Ted explained he had just lost his partner of 20 years, a man called James. On the same day, Gail revealed that she was a "Blairite" and voted for the Labour Party.

Gail has now been to visit Sarah in Italy, which followed a proposal by Audrey in the June period of 2008, after she sorted out all her problems, as Ted agreed to keep an eye on David whilst she was away. When she returned, she found that the house had been cleaned and decorated, Tina had been earlier that day to buy some plants to help decorate their house, after she was shown the variety of different plants, she soon found out that she was allergic to some of them, she moved one and found a cigarette stain on the carpet, David confessed about a wild party they threw while she was away, and he has a mate who smokes, Tina also told Gail that some guests came uninvited. Gail was upset about what they had done but she was also pleased that David had been honest.

Gail has recently been taking a shine to Tina's dad, Joe McIntyre, they have so far been on several secret dates but Gail does not want their relationship to become public knowledge.