In 2011, a mahogany side chair with carving done by Samuel McIntire sold at auction for $662,500. [1]. The price set a world record for Federal furniture.

The Peirce-Nichols House is a historic home located in Salem, Massachusetts. The home is owned by the Peabody Essex Museum. Samuel McIntire designed the Peirce-Nichols House (80 Federal Street), circa 1782, in a transitional late-Georgian/early Federal style for Jerathmiel Peirce, co-owner of the merchant ship Friendship.[3]

Pickering House (Salem, Massachusetts) (circa 1651) is a Colonial house, owned and occupied by ten successive generations of the Pickering family including Colonel Timothy Pickering. This house is believed to be the oldest house in the United States continuously occupied by one family. It is located at 18 Broad Street, Salem, Massachusetts and is open to the public under the auspices of the nonprofit Pickering Foundation.

The Witch House(also called the Jonathan Corwin House), was the home of Judge Jonathan Corwin and is the only structure still standing in Salem, Massachusetts with direct ties to the Salem Witch Trials of 1692.

The Gedney House is a historic Colonial American house, estimated to have been constructed circa 1665. It is located at 21 High Street, near the intersection of Summer Street in Salem, Massachusetts and operated as a non-profit museum by Historic New England. 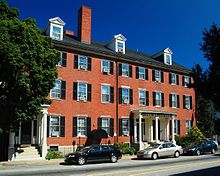 The Salem Inn on Summer Street, Salem Inn in the Chestnut Street District