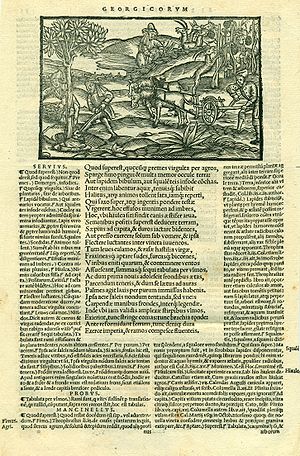 16th century edition of Virgil with Servius' commentary printed to the left of the text.

Maurus Servius Honoratus was a late 4th-century grammarian, with the contemporary reputation of being the most learned man of his generation in Italy; he was the author of a set of commentaries on the works of Virgil. These works, In tria Virgilii Opera Expositio, constituted the first manuscript to be printed at Florence, by Bernardo Cennini, 1471.

In the Saturnalia of Macrobius, Servius appears as one of the interlocutors; allusions in that work and a letter from Symmachus to Servius show that he was a pagan.

The commentary on Virgil has survived in two distinct manuscript traditions.[1] The first is a comparatively short commentary, which is attributed to Servius in the superscription in the manuscripts and by other internal evidence. A second class of manuscripts, all deriving from the 10th and 11th centuries, embed the same text in a much expanded commentary. The copious additions are in contrast to the style of the original; none of these manuscripts bears the name of Servius, and the commentary is known traditionally as Servius auctus or Servius Danielis, from Pierre Daniel who first published it in 1600.[2] "The added matter is undoubtedly ancient, dating from a time but little removed from that of Servius, and is founded to a large extent on historical and antiquarian literature which is now lost. The writer is anonymous and probably a Christian",[3] perhaps Aelius Donatus. A third class of manuscripts, written for the most part in Italy, gives the core text with interpolated scholia, which demonstrate the continued usefulness of the Virgilii Opera Expositio.

The authentic commentary of Servius Maurus Honoratus is in effect the only complete extant edition of a classic author written before the collapse of the Empire in the West. It is constructed very much on the principle of a modern edition, and is partly founded on an extensive Virgilian critical literature, much of which is known only from the fragments and facts preserved in this commentary. The notices of Virgil's text, though seldom or never authoritative in face of the existing manuscripts, which go back to, or even beyond, the time of Servius, yet supply valuable information concerning the ancient recensions and textual criticism of Virgil. In the grammatical interpretation of his author's language, Servius does not rise above the stiff and overwrought subtleties of his time; while his etymologies, as is natural, violate every modern law of sound and sense in favour of creative excursus.

Servius set his face against the prevalent allegorical methods of exposition of text. For the antiquarian and the historian, the abiding value of his work lies in his preservation of facts in Roman history, religion, antiquities and language, which but for him might have perished. Not a little of the laborious erudition of Varro and other ancient scholars has survived in his pages.

Besides the Virgilian commentary, other works of Servius are extant: a collection of notes on the grammar (Ars grammatica) of Aelius Donatus; a treatise on metrical endings in verse (De finalibus); and a tract on the different poetic meters (De centum metris).

The edition of Georg Thilo and Hermann Hagen (1878–1902), remains the only edition of the whole of Servius' work. Currently in development is the Harvard Servius (Servianorum in Vergili Carmina Commentariorum Editio Harvardiana); of the projected five volumes, two have so far appeared, i (Aeneid 1-2), 1946; ii (Aeneid 3-5), 1965, and the project continues glacially.