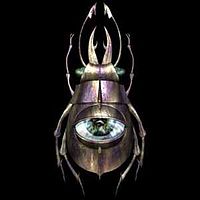 The Bene Tleilax or Tleilaxu (pronounced /tleɪˈlæksuː/[1]) are an extremely xenophobic and isolationist society in Frank Herbert's science fiction Dune universe. Genetic manipulators who traffic in biological products such as artificial eyes, gholas, and "twisted" Mentats, the Tleilaxu are a major power in the Imperium. The race is ruled by a small council of Tleilaxu Masters, whose genetically-engineered Face Dancer servants have the ability to mimic any human. The Masters themselves possess a bland and diminutive appearance intended to compel other races to underestimate them. In Heretics of Dune (1984) it is revealed that they are a secret totalitarian theocracy ultimately seeking domination of the known universe. Despite their influence, the Bene Tleilax are universally distrusted and inspire disgust because their products, though desirable, push the limits of the moral proscriptions established by the ancient Butlerian Jihad.

The Tleilaxu control a number of planets but are originally connected with Tleilax, the sole planet of the star Thalim; Herbert's 1965 novel Dune notes that the Tleilax is the source of "twisted" Mentats.[2] Baron Harkonnen states his intent to "send at once to Tleilax for a new Mentat" after Piter De Vries is killed.[3]

The Tleilaxu themselves step into the foreground in 1969's Dune Messiah, as their Face Dancer Scytale enters into a conspiracy with the Bene Gesserit, Spacing Guild, and House Corrino to topple the rule of Paul Atreides.[4] The Tleilaxu role in the Empire is illustrated as they gift Paul with the ghola Hayt, Paul's longtime friend Duncan Idaho brought back to life and retrained as a Mentat.[4] The Tleilaxu also provide artificial eyes for soldiers blinded by a stone burner.[4] Scytale finally offers Paul a ghola of his deceased concubine Chani, cloned from her cells, in exchange for his throne; Paul refuses and kills Scytale.[4] Duncan further ponders the Tleilaxu legacy of his creation in Children of Dune (1976).[5]

Over 3,500 years later in God Emperor of Dune (1981), Tleilaxu Face Dancers kill and replace nearly everyone in the Ixian embassy on Arrakis as part of an assassination attempt on Paul's seemingly immortal son, Leto Atreides II.[6] The Tleilaxu have been providing Leto with Duncan Idaho gholas for centuries, and their plot fails in part due to the ingenuity of the latest Duncan.[6]

Another 1,500 years pass, and in Heretics of Dune (1984) the core of the Tleilaxu is revealed: they are Zensufi, a distant offshoot of Buddhism and Sufism, and are organized along theistic lines.[7] They have spent thousands of years concealing this fact, waiting for their ascendancy, which they believe to be occurring in Heretics of Dune.[7] Their secret holy language is called Islamiyat, an ancient tongue the Bene Gesserit recognize and employ to elicit trust from the Tleilaxu.[7] The Bene Gesserit pretend to share the Tleilaxu "Great Belief, the Sufi-Zensunni ecumenism that had spawned the Bene Tleilax."[8] The Tleilaxu now provide the Sisterhood with Idaho gholas, and in Heretics of Dune it is also revealed that the Tleilaxu have developed the ability to grow the spice melange in the same axlotl tanks they use to grow gholas.[7]

By the events of Chapterhouse: Dune (1985), the Bene Tleilax have been all but eradicated by the fierce Honored Matres save for one Master, Scytale; he is a ghola of the original Scytale of Dune Messiah, somehow having ascended from Face Dancer to Master.[8] Captured by the Bene Gesserit, Scytale's secret bargaining tool is a hidden nullentropy capsule containing cells carefully and secretly collected by the Tleilaxu for millennia, including the cells of Tleilaxu Masters, Face Dancers, Paul Atreides, Chani, Gurney Halleck, Thufir Hawat and other legendary figures.[8] He intends to not only grow his own life-sustaining ghola, but to resurrect the rest of his order as well. In the meantime, he has given the Bene Gesserit enough of the axlotl technology to grow their own gholas, in particular a replacement for their military genius Miles Teg.[8]

Hunters of Dune and Sandworms of Dune

In Brian Herbert and Kevin J. Anderson's 2006 continuation of the original series, Hunters of Dune, the Lost Tleilaxu are introduced; they are descendants of the Tleilaxu and Face Dancers who left the Old Empire during The Scattering. However, their leadership is soon overtaken by their own Face Dancers, who have become independent and seek to control the universe themselves. Scytale, still a prisoner of the Bene Gesserit on the wandering no-ship Ithaca, manages to negotiate permission to grow a ghola of himself. In the series finale, Sandworms of Dune (2007), it is revealed that the autonomous Face Dancers are creations of the reincarnated thinking machine leaders Omnius and Erasmus but seek to overthrow their machine "masters" as well.

In the Prelude to Dune (1999–2001) prequel trilogy by Brian Herbert and Anderson, it is noted that the founder of the Bene Tleilax had been a Master named Xuttuh. Master Hidar Fen Ajidica heads Project Amal, an early attempt by the Bene Tleilax to create synthetic melange in order to eliminate dependence upon the planet Arrakis; intending an eventual Tleilaxu takeover of the universe, Ajidica sends "improved" Face Dancers off to unexplored systems.

The ancestors of the Bene Tleilax are featured in the Legends of Dune (2002–2004) prequel series by Brian Herbert and Anderson. They are a civilization of human merchants known as the "Tlulaxa", who specialize in slaves and replacement organs. They claim that the organs are grown artificially in organ farms; in reality, the vast majority of the organs are harvested from slaves. The Tlulaxa do have working organ farms, but they are used mainly as a front for the slave harvesting operations and provide only a small fraction of the replacement organs.

Masters are the leaders and real minds of the Bene Tleilax. After Dune Messiah, they have the ability to regain their genetic memory with ease, allowing them to live forever, using the axlotl tanks to create gholas of themselves. In Heretics of Dune it is noted via epigraph that Tleilaxu sperm "does not carry forward in a straight genetic fashion ... Gaps occur," and that they are "naturally immune to an Ixian Probe," an interrogation device which normally can extract information even from the dead.[7] The Tleilaxu are described as short, dwarf-like characters with gray skin, hair and eyes, elfin features and pointy teeth.[7] The Bene Gesserit suspect that their appearance is intended to encourage others to underestimate them.

Tleilaxu Masters control their creations by forcing them into a hypnotic state with some predefined, implanted sound (often a specific humming or whistling noise).[9][10][11] In Dune Messiah, the Tleilaxu dwarf Bijaz controls the ghola Hayt through a specific humming intonation that renders Hayt open to implanted commands. In Heretics of Dune, the Master Waff attempts to control his perfectly mimicked Face Dancer copy of High Priest Tuek with a humming language, but fails due to the copy's complete assimiliation into its new form.

The Bene Tleilax are masters of biological science and control the secrets of a number of important technologies in the Dune universe.

An axlotl tank is essentially a brain-dead woman whose womb is used as a tank to create gholas. The Bene Tleilax's use of their women in this capacity explains why no one has ever seen a Tleilaxu female.

In Heretics of Dune, it is revealed that the Tleilaxu have developed the ability to grow the spice melange in axlotl tanks, breaking the monopoly on spice that Arrakis held for thousands of years which strongly controlled the economics and the politics of the Imperium.

In Chapterhouse Dune, the Bene Gesserit have acquired axlotl tank technology and are able to use it to make gholas for their own purposes, but not spice. They are revealed not to be tanks at all, but dramatically altered women.

The axlotl tank is similar to the reproductive "stumps" in Herbert's Hellstrom's Hive.

Another of the most profitable and widely used creations of the Tleilaxu, chairdogs are alive and partially sentient creatures used for seating. They possess the ability to shape themselves to fit their occupant. Some characters dislike sitting on an animal and prefer normal chairs.

Face Dancers are sterile humanoids or "mules," with full sentience but a genetically-programmed loyalty to the Tleilaxu Masters. They are able to physiologically change their appearance to impersonate other people. They are used by the Tleilaxu throughout the universe to replace people whom the Tleilaxu find useful (the originals are usually killed). In this way they may infiltrate and control various groups in the universe. They are neither male nor female; changing 'gender' to fit the person they mimic.

Over the course of the series, as the Tleilaxu try to create more perfect mimics, the Face Dancers gain the ability to absorb the consciousness of their subjects by touch alone, with the potential unintended side effect of gradually becoming that person, and passing beyond the control of the Tleilaxu Masters. This renders them useless for any purpose other than living out the rest of their subject's life just as they would have on their own.

Similar to a clone, a ghola is a "manufactured" human duplicate; but while clones are grown from living cells, a ghola is grown in an axlotl tank from cells collected from a deceased subject. At the time of Dune, gholas have no access to the lives of the person from whom they were cloned, but after Dune Messiah, the Tleilaxu discover that a ghola can recover his or her genetic memory during a carefully staged moment of extreme stress. Much later in the series, it is revealed that the masters of the Tleilaxu have been using this knowledge gained in Dune Messiah as an improvised device for immortality: at their death, they are cloned; their clone recovers its memories, and the masters, in their serial incarnations, have memories stretching back thousands of years. The surviving Masters of Heretics of Dune are clearly the longest-lived characters in the saga, after Duncan Idaho who is the first ghola to recover its memories. Scytale himself by the events of Chapterhouse Dune would be over 5,000 years old through his serial incarnations.

One of the earliest successes of Tleilaxu genetic engineering, the slig is a hybrid livestock animal — a cross between a large slug and a Terran pig — first mentioned in Heretics of Dune and considered a delicacy: 'The sweetest meat this side of heaven.' Most people had thought that they were "tank-bred mutations", "ugly creatures who excreted slimy, foul-smelling residue, and whose multiple mouths ground incessantly on garbage", even though they enjoy devouring the flesh of these beasts (marinated slig medallions in rich Caladan wine sauces are considered a prime delicacy). Despite being the producers of sligs, the Tleilaxu themselves do not consume the animals, having designed them to facilitate what they see as the degrading decadence and spiritual bankruptcy of all cultures but their own.

The Tleilaxu are one of the five subfactions in the 2001 computer game Emperor: Battle for Dune.