Silver denarius, coinage of the Marsian Confederation, during the Social War (89 BC). The retrograde legend right (UILETIV [víteliú = Italia][1]) is in Oscan

Marsi is the Latin exonym for a people of ancient Italy, whose chief centre was Marruvium, on the eastern shore of Lake Fucinus, drained for agricultural land in the late 19th century. The area in which they lived is now called Marsica. During the Roman Republic the people of the region spoke a language now termed Marsian in scholarly English. It is attested by several inscriptions and a few glosses. The Linguist List classifies it as one of the Umbrian Group of languages.

The Marsian inscriptions are dated by the style of the alphabet from about 300 to 150 BC (the middle Roman Republic). Conway lists nine inscriptions, two from Marruvium, two from Lecce, one from Ortona, two from Trasacco and two from Luco. In addition are a few glosses, a few place names and a few dozen personal names in Latin form.[2]

Their language differs very slightly from Roman Latin of that date; for apparently contracted forms, such as Fougno instead of Fucino, may really only be a matter of spelling. In final syllables, the diphthongs ai, ei, and oi, all appear as e. On the other hand, the older form of the name of the tribe (dat. plur. Martses = Lat. Martiis) shows its derivation and exhibits the assibilation of -tio- into -tso-, proper to the Oscan language but strange to classical Latin.

The Bronze of Lake Fucinus was an inscribed bronze plaque taken from the bed of the lake near Luco in 1877 during the process of totally draining the lake. It was in a settlement that had been covered by the lake. The bronze was placed in the Museum of Prince Alessandro Torlonia, where it was photographed for publication. In 1894 no one could find it nor has it been seen since. The text of the photograph is as follows:[2]

They are first mentioned as members of a confederacy with the Vestini, Paeligni and Marrucini.[3] They joined the Samnites in 308 BC,[4] and, on their submission, became allies of Rome in 304 BC.[5] After a short-lived revolt two years later, for which they were punished by loss of territory,[6] they were readmitted to the Roman alliance and remained faithful down to the Social War, their contingent[7] being always regarded as the flower of the Italian forces.[8] In this war, which, owing to the prominence of the Marsian rebels is often known as the Marsic War, they fought bravely against odds under their leader Q. Pompaedius Silo, and, though they were frequently defeated, the result of the war was the enfranchisement of the allies. The Latin colony of Alba Fucens near the northwest corner of the lake was founded in the adjoining Aequian territory in 303, so that from the beginning of the 3rd century, the Marsians were in touch with a Latin-speaking community, to say nothing of the Latin colony of Carsioli (298 BC) farther west. The earliest pure Latin inscriptions of the district seem to be C.I.L. ix. 3827 and 3848 from the neighbourhood of Supinum; its character generally is of the Gracchan period, though it might be somewhat earlier. 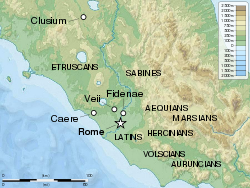 Ancient peoples of Central Italy in the 5th century BC.

Mommsen[9] pointed out that, in the Social War, all the coins of Pompaedius Silo have the Latin legend "Italia", while the other leaders in all but one case used Oscan.

The chief temple and grove of the goddess Angitia stood at the southwest corner of Lake Fucinus, near the inlet to the emissarius of Claudius (restored by Prince Torlonia) and the modern village of Luco. She (or they, for the name is in the plural in the Latin inscription next cited) was widely worshipped in the central highlands[10] as a goddess of healing, especially skilled to cure serpent bites by charms and the herbs of the Marsian woods. Her worshippers naturally practised the same arts—as their descendants do.[11] Their country was considered by Rome to be the home of witchcraft.[12]