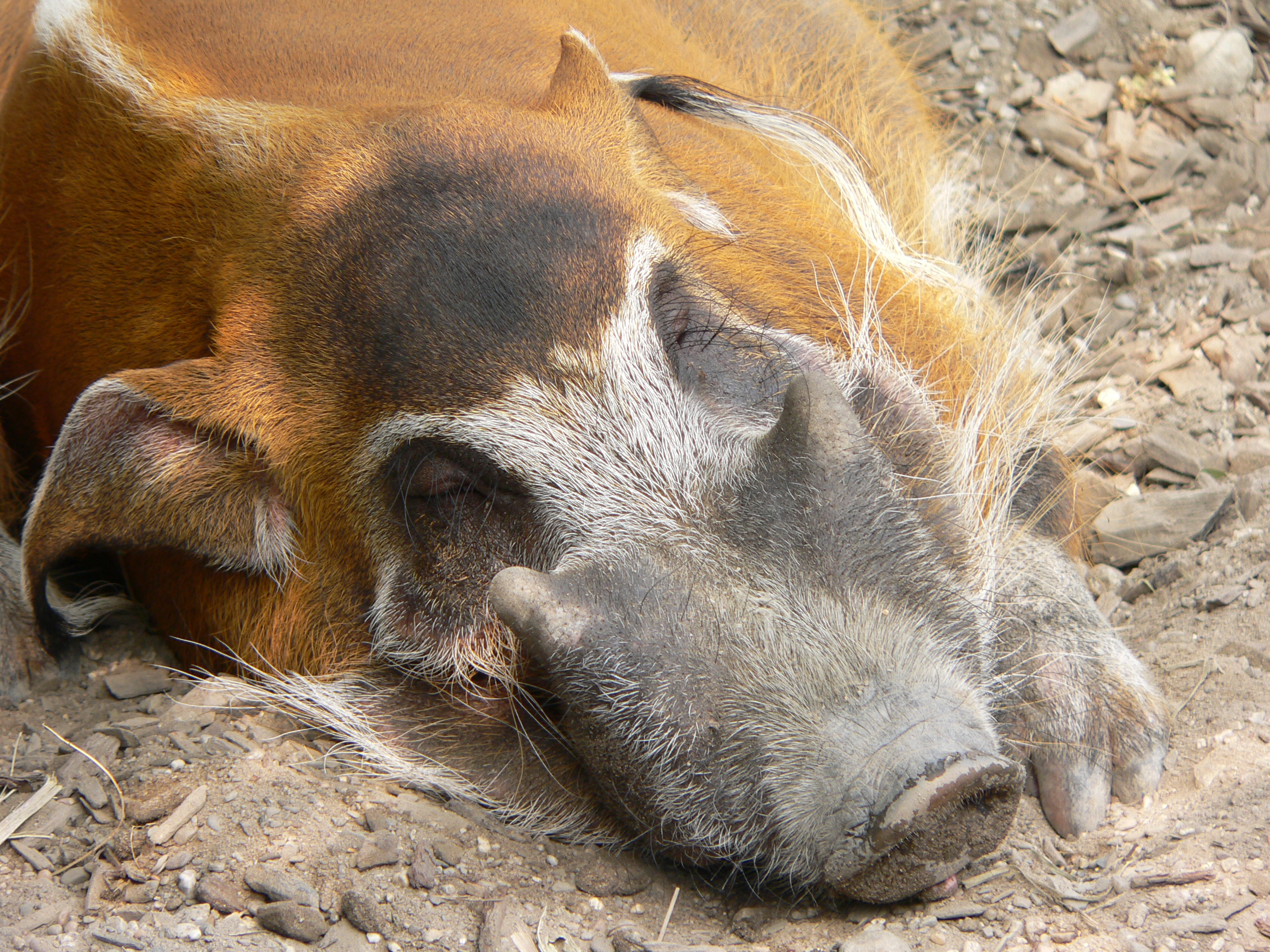 The Red River Hog ("Potamochoerus porcus"), also known as Bush Pig (but not to be confused with "P. larvatus", common name ""), is a wild member of the pig family that lives in the s, s and brushes of .

Adults weigh up to 200 lb and stand 0.6-0.75 m. The fur is brown, with black legs and black and white snout along the top, a white stripe goes end to end on the spine. They live in herds of 6-20 members, led by the strongest boar. Typically, 3-6 piglets are born at a time.

The Red River Hog has a striking red fur. There is a vague, white line that runs over the back. The animal has a blank face mask around the eyes, on the cheeks and on the jaws. The muzzle and the face are black. The hair on the jaw and the flanks is longer than on the rest of the fur.

The Red River Hog has length of 1 to 1.5 meter. The thin tail is 30 to 45 centimetres long. The boar is somewhat larger than the sow. Also, the male has recognizable humps/lumps on both sides of the muzzle and rather small, sharp battle cogs.

The Red River Hog is . It eats mainly s and s, and completes its diet with fruit, grasses, herbs and animal food such as eggs, dead animal and plant remains, s, and s. To find the turnips, roots and insects, it tosses its large muzzle in the ground. In this way, Red River Hogs can cause much damage to agricultural plants.

They live in small troops of four up to twenty animals, comprising a male (boar), some adult sows and their piglets. The boar defends its harem aggressively against s; the is its most important enemy. Different troops merge sometimes and form groups of up to sixty animals.

The Red River Hog lives in s, wet, dense s, in forested s, and in the nearness of rivers, lakes and es. The distribution ranges from the Congo area, from to East-Congo, southwards to the and the . The exact delineation with the bush pig is unclear but in broad terms it can be said that the red river hog occupies West and Central Africa and that the bush occupies Eastern andSouthern Africa. Where the two meet they undoubtedly interbreed although some authorities dispute this. Till very recently a red river hog from West Africa was often considered an orange colored bush pig. The pigs found on Madagascar are thought to be bush pigs although some authorities assign the pigs on this island to two subspecies ("larvatus and hova"). Much confusion consist over the coloration of the bush pig and red river hog but in broad terms it is safe to say that the most southern specimens are drab colored and as one moves north and west the populations become more orange and mature males get blacker foreheads.