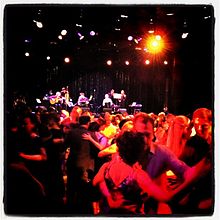 Milonga is a term for a place or an event where tango is danced. People who frequently go to milongas are sometimes called milongueros. The term "milonga" can also refer to a musical genre.

The music played is mainly tango, vals and milonga (as the musical genre). Most milongas are held on a regular basis (usually weekly), and they often begin with dancing classes and sometimes demonstration dances. Usually, three to five songs of a kind are played in a row (this is called tanda) followed by a short musical break (called cortina) to clear the dancefloor and facilitate partner changes. There are a number of informal rules that dictate how dancers should choose their dancing partners.[citation needed]

Due to the strict assembly ban imposed by the military government, milongas almost disappeared from Buenos Aires in the 1960s and 1970s[citation needed]. Nevertheless, since the beginning of the 1990s, the tango culture in Buenos Aires has undergone dynamic development, and today one can choose from between fifteen and thirty different milongas every day.