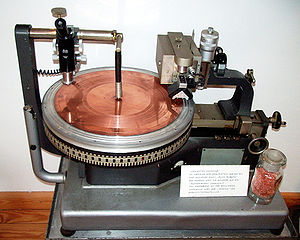 DMM copper disc sitting on the turntable of a Neumann AM131 lathe, built in the 1930s

Direct Metal Mastering (DMM) is an analogue audio disc mastering technique jointly developed by two German companies, Telefunken-Decca (TelDec) and Georg Neumann GmbH, towards the end of the 20th century after having seen the same technology used by RCA Princeton Labs for their SelectaVision videodiscs in the late 70's.

Neumann was responsible for manufacturing the actual DMM cutting equipment as part of their VMS80 series lathes. Unlike conventional disc mastering, where the mechanical audio modulation is cut onto a lacquer-coated aluminum disc, DMM cuts straight into metal (copper), utilizing a high frequency carrier system and specialized diamond styli, vibrating at more than 40 KHz (i.e. 60KHz) [1] to facilitate the cutting.

The advantages of DMM (hard surface material) over acetate lacquer cutting (soft surface material) are both sonic and practical: because of the rigidity of the master disc medium, no groove wall bounce-back effects take place after the cutting has been completed. This preserves the original modulation details in the groove walls much better, especially those involved with sudden fast attacks (transients). The improved transient response, as well as the more linear phase response of DMM improve the overall stability and depth-of-field in the stereo image. In addition, disturbing adjacent groove print-through sounds (groove echoes) are reduced in DMM. Also, there is no need to rush the finalized master disc directly into a refrigerator for groove preservation, as in conventional lacquer disc cutting, before processing the master disc to produce matrices for the pressing of the records.

The DMM copper master disc can be plated to produce the required number of stampers using the one-step plating process. Rather than having to electroform a master (or "father"), mother and then stampers (the traditional "three-step process"), the DMM copper disc serves as the 'mother". Bypassing the silvering process and two electroforming stages reduces the risk of introducing noise that can be generated in the electroforming (galvanic) process. In cases where hundreds of stampers may be required, the DMM disc is often plated to produce a master and mother, from which many stampers are then made.

Along with mechanical audio recording and vinyl LP pressing in general, DMM in now more or less a thing of the past (certainly not in the mainstream of the sound recording industry any longer). Since the sale of Neumann to German microphone manufacturer Sennheiser, Neumamnn no longer produces lathes or supplies parts. The lathes in use today are kept operational by independent service consultants, as well as cutting room personnel themselves, often by buying incomplete lathes and stripping them for parts.

The DMM specification also includes a profile for the pressing of 12" records. To the naked eye, this profile has no obvious contour on the face of the record giving the appearance of a totally flat faced record. For the purpose of compression moulding, which is the process by which records are pressed, the face of the record does indeed have a contour and a cross-sectional view of a 12" record will reveal that it is wedge shaped from the centre to the edge. The lack of obvious contour in the groove area on the face of the record closely replicates the original disc surface and reduces playback errors. Pressing records with this profile was mandatory for a record to bear the "DMM" logo. DMM licensees who did not use this profile were unable to use the DMM logo on their products, but were of course free to use terms such as "Mastered on Copper" as did EMI Australia when not using the DMM profiled moulds or when cutting a DMM master for another record manufacturer. The best example of a DMM pressing can usually be found on the Teldec (Germany) or EMI (UK) labels from the 1980s.

The decline of vinyl records in favour of the Compact Disc, saw many Neumann VMS82 DMM lathes converted for cutting lacquer discs as few plants were able to process DMM masters and so many disc cutting facilities conformed to the industry standard - cutting on lacquer.

As at 2009 there are six or seven DMM cutting facilities left in the world - all located in Europe. The USA lost its last DMM cutting facility in 2005 with the demise of New York City based record manufacturer Europadisk LLC. Europadisk's DMM lathe was sold at auction on 20-SEP-05 to the Church of Scientology for US $72,500. This gives CoS two DMM lathes for the purpose of transcribing L. Ron Hubbard's speeches to disc and with the development of their wind-up record player to be entombed in time capsules, this would create a system to commit those speeches to posterity for years to come.

The DMM concept was a spin-off of RCA's SelectaVision development of CED videodisc recording equipment both in Indianapolis as well as the David Sarnoff Research Facility in Princeton NJ who traded it to Teldec for other research it used in other capacities. After further development, Teldec attempted to sell it's DMM technology back to RCA, however RCA was not interested. Therefore, as a result, all DMM titles from RCA and subsidiary labels were all mastered elsewhere.

Although Neumann produced, demonstrated and promoted a successful prototype CD Mastering unit for DMM, it never went into commercial production. Most of the remaining original spare parts were purchased from Neumann by the UK disc cutting consultant Sean Davies, who carried on repair maintenance of existing systems since Neumann stopped production.[2]

The photo at right shows a DMM copper disc sitting on a very early Neumann AM series lathe from the late '30s. The cutterhead shown is the Neumann SX74 for cutting lacquer discs (not copper discs) and was introduced in 1974.

With the groove being cut straight into a metal foil, this removed a number of plating stages in the manufacturing process. This gave rise to more upper frequency levels and less surface noise. Additionally, groove pre-echo problems are significantly diminished.

DMM LP pressings are sometimes described by some as having a harshness or forwardness in the high frequencies. The fact the groove is cut to copper, a hard metal, and not to soft lacquer, nitrocelullose, supposedly endows DMM vinyl LP with a very different tonality to traditionally manufactured vinyl LP pressings. Direct Metal Mastering requires a radically different cutting angle than traditional (lacquer) cutting, almost 0 degrees[3]. However the playback cartridges will always have the standard playback angle of 15º-22.5º. Thus, the DMM process includes electronic audio processing [4] so the records can be played with a standard cartridge despite having been cut at a substantially different angle. This electronic processing might account for the supposedly different high frequency "signature sound" of DMM records.

A similar technique, developed by Teldec is used for digital records on CFs and DVDs.