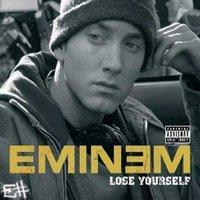 "Lose Yourself" is a song by American . It was released in 2002 as part of the soundtrack to the film "8 Mile", also starring Eminem. The song had additional production by Luis Resto and Jeff Bass.

The song was written by Eminem during a break of the filming of "8 Mile". He recorded it in a portable studio on the set, recording all three verses in one take. The sheet on which he wrote the song appears in "8 Mile" in a scene where his character is writing while riding the bus. This sheet was sold on for $10,000.

The song's lyrics explicitly sum up the background info about Eminem's character in "8 Mile", B. Rabbit, with the first verse summing up much of the plot of the movie.

The song's general production style is similar in scope to the track "'Till I Collapse" from "" (released before "8 Mile"). Both tracks begin with an interlude punctuated by a piano, followed by a gradual introduction of the beat, accompanied by a spoken introduction by Eminem. Both tracks also prominently feature a bass loop and some elements. "Lose Yourself" was also Eminem's first and only #1 single in the U.S.

"Lose Yourself" is the most successful single of Eminem's mainstream career. As such, it is considered to be his . It had a 12-week run at #1 in the & , and topped the charts in many other countries as well, including the , , and among others. It debuted at number nine in and moved up to #1 the following week. According to the "Lose Yourself" became the "Longest Running Single at Number One for a Rap Song".

The song went on to receive the (the first time a rap song ever won this award), upsetting the favored song "" by . It is rumored that Eminem, who was not present at the award ceremony believing he would not win for a rap song, was sleeping at the time the award was announced. This was the first time in 14 years the winner of the Best Original Song category was not performed at the ceremony. , one of the song's co-writers, had attended the ceremony and accepted the award instead. "He's creative, he has symphonies in his head," Resto said at the lectern about Eminem. [http://www.people.com/people/article/0,,625790,00.html] The later ranked it #93 on their list of the 100 Greatest Songs from American Films.

At the , "Lose Yourself" became Eminem's second career nomination for Record of the Year (following ""), and the first rap song ever to be nominated for Song of the Year. It won Best Male Rap Solo Performance and Best Rap Song, which was a brand new category at the time.

The for "Lose Yourself" was filmed in , and thus contains numerous shots of the city, including of the . The video is a mixture of multiple scenarios, including scenes from and reminiscent of the movie "8 Mile", and Eminem rapping next to the "8 Mile Rd. Mobile Court" sign that appears on the cover of the movie's soundtrack.

It contains scenes focusing on Rabbit's and the real life Eminem's character, for example, the difficulties he has to face while rapping, the insult and booing of crowds as he is a white rapper and the trouble he has to face due to his alcoholic mother and people he hangs out with.

He won a Video Awards in 2003 for Favourite International Artist with the video for "Lose Yourself".

At the 2003 it received the award for Best Video from a Film in the final year this award was given out. It also received nominations for Video of the Year, Best Male Video, Best Rap Video, and Viewer's Choice.

The song's intro samples by . Fact|date=March 2008

* The Teen drama series "" named its season premiere episode after this song.
* The music video is parodied in the movie "Scary Movie 3".
* used the song as the house music for all of the concerts on their 2005–2006 tours.
* On , , quoted the chorus of the song in her at the . [ [http://news.yahoo.com/s/ap/20060515/ap_en_ce/people_foster News.yahoo.com] ]
* Many athletic teams use this song over their PA system before games.
* Part of the tune of the song is used as the theme music on the German detective series .
* During an October 2006 interview with the K102 Morning Crew in (), country artist did an acoustic rendition of the intro and first verse of "Lose Yourself" live on the air, citing it as her favorite workout song.

* The Croatian band did a of this song titled 'Izgubi Se,' which loosely translates to 'Lose Yourself' in English.
* made a of the song, titled "Couch Potato", on his 2003 album "". Eminem had given him permission to parody the song, but not to produce a music video for the parody. Al has also released a t-shirt in his online store that parodies the "8 Mile" movie poster.
* In 2003 the Australian comedy duo produced a rap version of the folk song "" called "Cleanin' Out My Tuckerbag", which parodies both "Lose Yourself" and "", but does not credit Eminem.
* has made a parody called "Look Yourself".
* The show parodied part of the film in the rapping sequence involving and a collection of other characters. [ [http://www.youtube.com/watch?v=8m1cSVlND2w Youtube.com] ]
* The Belgian comedian Chris Van den Durpel made a parody titled: "rijbewijs", which translates to 'driving licence', shown in his TV-show "Chris & Co".
* sampled this song on his track "Lu Myself" on his mixtape, Lupe the Jedi and the Touch The Sky mixtape.