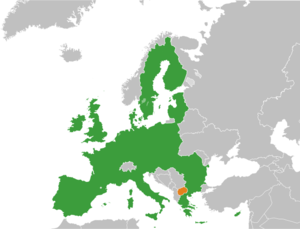 The accession of the to the is one of the highest strategic priorities for the country's government. [cite web | url= http://ec.europa.eu/comm/competition/international/bilateral/fyrom.html|title=Europa, European Commission | work= Bilateral relations > The Former Yugoslav Republic of Macedonia | accessdate=2008-06-04] [cite web| url= http://www.delmkd.ec.europa.eu/| title= Europa, The European Union in the World | work= The European Union Mission to the former Yugoslav Republic of Macedonia| accessmonthday= December 26| accessyear= 2006] This aspiration is shared by the majority of citizens and politicians.Fact|date=May 2008 The Government's motto for the candidacy is "The Sun, too, is a star", referring to the sun from the national flag being displayed amongst the other stars in the Flag of the EU, in the official logo of the candidacy.

On , in , Ireland, the Republic submitted its application for EU membership. Six months later, it started the procedure of answering the Questionnaire of the about the performance of the applicant country for membership in the European Union.

By , in less than four months, the country's institutions had prepared the answers, realistically presenting the situation, and also the plans for advancement in each of the particular sectors in society. Fact|date=September 2007

The European Commission reviewed the answers and recommended granting status of candidate country for membership in the EU.

The on 17 December, 2005 granted the Republic candidate status for membership of the EU, recognizing the progress that it has made in meeting the .

The former Yugoslav Republic of Macedonia at the moment is part of the stabilisation and association process – a process which leads to Union membership. The President of the European Commission, , stated before the “"On top of this success" (meaning the success from the recent EU enlargement) "we should make Europe complete opening the doors for the Balkans."” The Government has already applied for accession and it moves on with firm determination towards the target.

As part of the activities for EU approximation, on , the government adopted the National Strategy for . It is especially important that this Strategy was supported also by the Assembly of the country through the Commission for European Issues, thus confirming the general political consensus on European integration.

On , n Minister of Foreign Affairs stated that Bulgaria, which joined the EU on , would not unconditionally and indispensably support the membership of the Republic, citing what he called "aggression towards the Bulgarian nation or history on behalf of the Macedonian authorities" as a reason. [ [http://www.setimes.com/cocoon/setimes/xhtml/en_GB/features/setimes/newsbriefs/2006/07/25/nb-07] ] President supported Kalfin, saying that the Bulgarian "support for Macedonia would depend on the tolerance of the country towards Bulgarian history and the lack of negative attitudes and aggression". [ [http://www.sofiaecho.com/article/bulgarias-position-concerning-macedonia-unchanged--kalfin/id_16822/catid_64] ]

This was followed by an immediate negative diplomatic answer from the Republic's officials who stated that the country has no interest in Bulgarian national history, but in no situation whatsoever will deprive itself from what it regards as its own national history. [ [http://www.sofiaecho.com/article/foreign-briefs/id_16901/catid_5] ] The President Branko Crvenkovski stated an opinion that "such rough and undiplomatic statements coming from Bulgarian officials are in the service of the upcoming elections in Bulgaria and should not be recognized and damage the bilateral relationship between the two countries". [ [http://www.focus-fen.net/index.php?catid=123&newsid=93371&ch=0] ]

A major stumbling block for the accession process is the Republic's still-unresolved dispute with Greece over its name. Although the country prefers to be called by its constitutional name, as the Republic of Macedonia, Greek objections meant that it was recognised by the European Union as the "former Yugoslav Republic of Macedonia" (or FYROM). This term is used by the EU in all bilateral relationships, although some EU states use the Republic's constitutional name in their own bilateral dealings with it.

On , the Greek foreign minister, , stated that "...the , under any composition, will not ratify the accession of the neighbouring country to the and if the name issue is not resolved beforehand."

More recently, EU sources have reportedly said that the Republic's hope of starting accession talks next year cannot succeed, on the grounds that its new prime minister has allegedly shut out the country's ethnic Albanian minority and has politicised many state institutions. [cite web|url=http://www.euronews.net/create_html.php?page=europa&article=388462&lng=1 |title=Euronews.net |work=Western Balkans told 'hold' for EU membership | accessmonthday=November 2| accessyear=2006] The former Yugoslav Republic of Macedonia, as other west Balkan countries, can expect to join in the medium to long term. [cite web|url=http://news.bbc.co.uk/2/hi/europe/6113926.stm |title=BBC |work= EU to disappoint Balkan hopefuls | accessmonthday=November 3| accessyear=2006]

* October — the country appointed its representative in Fact|date=July 2007, agreeing to the use of the "former Yugoslav" before its constitutional name ("Republic of Macedonia") designation in bilateral relations;
* — the Republic and the EU established diplomatic relations when the EU opened negotiations in the direction of signing the Agreement with a wide scope of co-operation in the fields of trade, financial operations and transport;
* February — the Republic raised the status of its permanent Mission in Brussels to an ambassadorial level;
* — the Republic became a full partner in the Programme ( and : Assistance for Reconstruction of their Economies);
* — began negotiations for the Co-operation Agreement between FYROM and the European Communities as well as Transport Agreement;
* — in Brussels, the Cooperation Agreement between the former Yugoslav Republuc of Macedonia and the European Communities and the Transport Agreement were concluded. Both were signed on in Luxembourg;
* November — the Transport Agreement entered into force, and Co-operation Agreement between the former Yugoslav Republuc of Macedonia and the European Communities entered into force on ;
* February — in , in accordance with the Co-operation Agreement, the first political dialogue at ministerial level was held;
* — Trade and Textile Agreement was signed (although it entered into force on ). The Agreement was valid until . Nevertheless, as of , renewed Trade and Textile Agreement is in force;
* 21 and — in , the first meeting of the mutual Co-operation Council was held. The Council is established aiming to follow-up the implementation of Co-operation Agreement, achievements and development of the structural reforms, as well as to give suggestions and directions in relation to certain specific issues;
* — in Brussels, the second meeting of the Co-operation Council was held;
* June — the Report on the Possibility to Start the Negotiations for the new was adopted;
* — the European Commission's directives proposed by the EU Council were adopted, concerning the raising the co-operation level between the former Yugoslav Republic of Macedonia and the EU, as well as the official start of the negotiations for a potential EU membership;
* March — with the opening of the EU Delegation in Skopje and the appointment of the first Chief of the Delegation, bilateral relations were raised to an ambassadorial level;
* — pursuant to the of the European Commission, the first round of the negotiations on the SAA officially began. The negotiations were realized in a very short period of time (April - November, ) through three rounds of official negotiations and five meetings at an expert level, particularly technical negotiations;
* June — in the course or the session of the European Council in , the perspective (regulation) on potential membership was adopted;
* — at the margins of the , the SAA was initialled;
* December — the Council Regulation on Introducing Exceptional Trade Measures entered into force, as well as the inclusion of the former Yugoslav Republic of Macedonia in the Regional Programme - ;
* — Interim Agreement on SAA Trade Provisions signed;
* — in Luxemburg, the SAA was signed. At the same time, the Interim Agreement on Trade and Trade Issues was signed. The Agreement entered into force on ;
* January — supplementary Protocol on Wine and Spirits, and Textile Products Trade Agreement;
* — the President of the European Commission, Romano Prodi, visited Skopje and repeated the EU position on the country's perspective for EU membership;
* — the last (sixth) meeting of the Cooperaton Council was held in Brussels;
* February — the Assembly of the Republic adopted the “Declaration on the Application for EU membership”;
* — at a ceremony in Dublin, Ireland, the Macedonian government submitted the application for membership in the EU;
* — the entered into force following the ratifications by all the EU Member States;
* — first meeting of the Stabilisation and Association Committee held in Skopje;
* — the Republic's government adopted the ;
* — first meeting of the Stabilisation and Association Council in Brussels;
* — the President of the European Commission, Romano Prodi, submitted the Questionnaire to the Macedonian government.
* — the government finalised the preparation of the Answers to the Questionnaire for the preparation of the European Commission’s Opinion on the application of the former Yugoslav Republic of Macedonia for membership of the EU.
* — A Macedonian delegation submitted the Answers to the Questionnaire of the European Commission to the President of the European Commission, in Brussels
* Additional Questions to the Questionnaire of the European Commission that were received on , are answered, accepted by the Republic's government and sent to Brussels on
* — the European Commission issued the opinion on the candidacy of the former Yugoslav Republic of Macedonia for EU membership. The opinion recommends granting candidate status for membership in the EU.
* — the European Council in Brussels approves the candidate status.
* — the European Commission decided to start visa facilitation negotiations with the Republic.
* - the issues the "2006 Progress Report on the Former Yugoslav Republic of Macedonia" [ [http://www.europarl.europa.eu/sides/getDoc.do?pubRef=-//EP//TEXT+TA+P6-TA-2007-0352+0+DOC+XML+V0//EN&language=EN European Parliament resolution of 12 July 2007 on the 2006 Progress Report on the Former Yugoslav Republic of Macedonia ] ] Both Greece and the Republic declare a "victory" - The report is critical of the Bilateral Immunity Agreement with the USA (which violates the principles of the ); failures in the implementation of the Badinter principle; the affair; the renaming of to "Alexander the Great"; and other issues such as environmental protection and neighborly relations. Two proposed amendments referring to Bulgaria and Greece's failure to recognize a [Slav] Macedonian minority living in these countries, and one referring to the constitutional name "Republic of Macedonia", were rejected. [citenews|url=http://www.makfax.com.mk/look/novina/article.tpl?IdLanguage=1&IdPublication=2&NrArticle=75631&NrIssue=396&NrSection=10|title=EP adopted report on Macedonia|work=|date=2007-07-12] On the other hand, the EU reiterated that the naming issue will not be considered in the accession process (although Greece's ability to remains intact). EuroMPs from the ruling Greek party voted in favor of the resolution; those from the opposition party voted against.
* - Following the EU summit, the resolution of the naming dispute was added as a precondition to EU accession. [citenews|url=http://www.balkaninsight.com/en/main/news/11204/|title=Macedonia 'Name' Solution Before EU Talks
work=|date=2008-6-20] [citenews|url=http://www.euractiv.com/en/enlargement/macedonia-pm-greek-outburst-eu-summit/article-173577|title=Macedonia PM in Greek outburst after EU summit|work=|date=2008-6-23]

With the adoption of "The strategic bases of the Republic of Macedonia on achieving the membership of the European Union" in September , the Government set up the foundations of the management infrastructure for the European Integration process. In the following period, in order to achieve greater effectiveness and efficiency, based on the foreign experiences, as well as greater commitments to the EU, and taking into account the greater commitment to EU, made corrections and upgrading of the management and coordination system with the European integration process. So today, it has the following structure:

The other institutions supporting the EU integration process are the following: