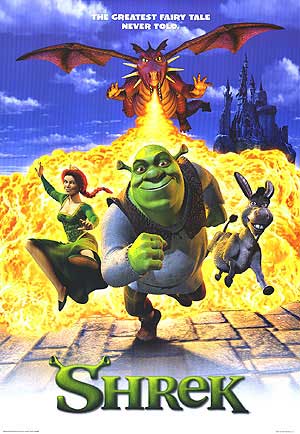 The film stars Myers as a large, strong, solitude-loving, intimidating named Shrek (from the German word "schreck" meaning "terror" or word שרעק, meaning "fear"), Diaz as the beautiful but very down-to-earth and feisty , Murphy as a talkative named Donkey, and Lithgow as the villainous .

It was critically acclaimed as an animated film worthy of adult interest, with many adult-oriented jokes and themes but a simple enough plot and humor to appeal to children. It made notable use of pop music&mdash;the soundtrack includes music by , , , , , , and .

The film was extremely successful on release in 2001 and it helped establish as a prime competitor to in the field of feature film animation, particularly in computer animation. Furthermore, Shrek was made the for the company's animation productions.

"Shrek" was ranked second in a poll of the 100 greatest family films, losing out on the top spot to "". [ [http://www.channel4.com/film/newsfeatures/microsites/F/greatest-familymovies/results/5-1.html 100 Greatest Family Films] ]

The story begins with Shrek (Mike Myers) peaceably enjoying life within his home: a swamp. This is shattered when he inadvertently rescues the stubborn and talkative Donkey () from soldiers sent by the short (). Farquaad is obsessed with ruling a "perfect kingdom", without any fairy tale creatures in it, and uses the Magic Mirror to select a princess bride to marry to become king. He chooses (), who is held captive in a castle surrounded by lava and guarded by a fire-breathing dragon.

Much to Shrek's chagrin, Lord Farquaad has relocated all the fairy tale creatures to his swamp. Shrek and Donkey head off to the Kingdom of Duloc so they can complain to Farquaad and Shrek can get his swamp back. When Shrek and Donkey get to the Kingdom, they interrupt a tournament Farquaad is holding in order to select a knight worthy of rescuing Princess Fiona. Lord Farquaad then sends the knights to kill Shrek, but Shrek easily defeats them. Lord Farquaad proclaims Shrek the winner of the tournament and agrees to remove the fairy tale creatures from the swamp if Shrek rescues Fiona.

When they get to the castle Shrek and Donkey split up to search for Fiona. As Shrek, after putting on the helmet of a fallen knight finds the princess, Donkey runs into the fire-breathing dragon and begins to give compliments to her to stop her from killing him. Dragon takes these compliments seriously and she subsequently takes Donkey away to her chambers. After escaping, Fiona orders Shrek to remove his helmet so they can share true love's first kiss. Shrek refuses her request at first, but then shows her his true face. Upon realizing that he is an ogre and not her true love, she angrily refuses to go with Shrek back to Duloc. Shrek takes Fiona by force instead, picking her up and throwing her over his shoulder. The three set off back to Duloc.

On their way through the woods, Fiona insists that they should stop and make camp as sunset comes. Fiona sleeps in a little rock cave while Shrek and Donkey talk under the stars, where Shrek reveals he is upset that people judge him as nothing but a monster without getting to know him.

The next night, Shrek and Fiona are about to kiss when Donkey reminds them of the sun setting. Surprised, Fiona rushes into the old windmill near which they are camping. Donkey now thinks that Shrek and Fiona are falling in love, but Shrek feels that he and Fiona could never be and storms off. Donkey enters the windmill, but finds an ogress instead of Fiona. He realizes that the ogress "is" Princess Fiona. She explains that she was cursed by an enchantment as a child by a witch: human by day, ogress by night, until she receives her true love's first kiss and takes "love's true form". Donkey feels that Shrek and Fiona have a lot in common, and tells Fiona so. Meanwhile, Shrek comes up to the door of the windmill, ready to tell Fiona how he feels, but overhears only part of the conversation between Fiona and Donkey and thinks that Fiona is calling him a horrible monster, when she is in fact talking about herself. Shrek leaves, angry and heartbroken, without listening to the rest of the exchange: Fiona asks Donkey not to reveal the secret to anyone.

Before Shrek returns, Fiona decides that she will tell him about her feelings and her secret, confident that he will be understanding. The sun rises, turning Fiona into her human form. Shrek appears, but before Fiona can fully explain things to him, Shrek angrily tells her that he overheard her conversation with Donkey the night before. Fiona, not knowing that Shrek is under a false impression of her feelings from only hearing part of the conversation with Donkey, now assumes that Shrek is simply rejecting her because of her secret curse. This apparent hypocrisy and shallowness on Shrek's park causes Fiona to become angry at him in return. Farquaad and his knights then arrive to pick up Fiona. Farquaad honors his arrangement with Shrek by relinquishing the deed to the swamp, then proposes marriage to Fiona. Still hurt and angry at Shrek, Fiona quickly accepts Farquaad's offer. Farquaad takes Fiona back to Duloc and begins the preparations for the marriage, while Donkey rushes to Shrek, telling him to stop Farquaad from taking Fiona. Shrek refuses to listen and sets off for his swamp, leaving an upset Donkey behind him.

Shrek goes home to return to his normal life, even more miserable than before. Donkey returns to Shrek's swamp to confront Shrek and tells him that Fiona was talking about somebody else rather than him. Shrek wants to end the wedding before it is too late, but worries he would not be able to make it in time. Donkey then whistles and Dragon appears offering to take them. Upon arriving, Shrek storms in and objects to the wedding. Shrek tells Fiona that Farquaad only wants to marry her so that he can be king and that he is not her true love. Farquaad realizes that Shrek has fallen in love with the princess. He and the rest of the citizens begin to laugh before he reminds Fiona that they are one kiss away from their happily ever after. The sun then sets, revealing Fiona's ogre form. Farquaad, disgusted, orders his knights to kill Shrek and lock Fiona back in her tower. Shrek whistles and Dragon smashes through a stained glass window and swallows Farquaad. Shrek tells Fiona that he truly loves her and they share a kiss that turns Fiona into an ogress permanently. She is initially confused, as she was expecting to become beautiful, but Shrek assures her that she "is" beautiful.

At the end, the two get married and set off on their honeymoon in an onion carriage. In a post-credits scene, Shrek hosts a variety of songs sung by many of the characters of the movie.

, who had worked for Katzenberg before in "Aladdin" and had had a bitter falling out with him and after going back on the deal they had (which can be explained in the "Aladdin" page), has hinted in an interview that he has refused a role in this film, because it would mean working for Jeffrey Katzenberg again. He would not state which role he refused [ [http://www.imdb.com/name/nm0000245/news Robin Williams (I) - News ] ] .

was originally going to do the voice for Shrek and did at least half of the audio for the voice, but died before the project was completed. Dreamworks then re-cast the voice role to Mike Myers. After Myers had completed providing the voice for the character and the movie was well into production, he asked to be allowed to re-record all of his lines in a Scottish accent similar to the one his mother had used when she told him bedtime stories. Myers had also employed this character voicing for a skit during his "" tenure, and also for the character Stuart MacKenzie in the motion picture "" and in "" and "."

Previous films and TV shows, such as and The Princess Bride, have parodied the traditional fairy tale. However, "Shrek" itself has noticeably influenced the current generation of mainstream animated films. Particularly after "Shrek 2", animated films began to incorporate more references and end-film musical numbers. Such elements can be seen in films like "", "Robots", and "Chicken Little". It also inspired a number of CG animated films which also spoofed fairy tales, or other related story genres, often including adult-oriented humor, most of which weren't nearly as successful as "Shrek", such as "", "", "Igor", and "". [ [http://www.time.com/time/magazine/article/0,9171,1619573,00.html "Is Shrek Bad for Kids?" Time Magazine May 10, 2007] ] .

A musical version of "Shrek" is planned for the stage, announced to open on Broadway at with previews starting on November 9, 2008 and opening December 14, 2008. Previews began on Thursday, August 14, 2008 in Seattle, Washington at the 5th Avenue Theatre, and ended on Sunday, September 21, 2008. The cast is as follows, from [http://www.broadway.com] , [http://www.broadwayworld.com] , and [http://www.shrekthemusical.com]

Chester Gregory II played the role of Donkey in the pre-Broadway tryout, but for the New York run the part will be played by Daniel Breaker. The role of the dragon will now be voiced by the chorus instead of a soloist. [http://www.broadwayworld.com/viewcolumn.cfm?colid=33354 Breaker Replaces Gregory and Other Changes Announced for NY Bound SHREK 'broadwayworld.com" article, Sept. 30, 2008] , composer of "Thoroughly Modern Millie" and "" is composing the show's music, with the book and lyrics by David Lindsay-Abaire. A reading was held in February 2007, and a later one was held in July-August 2007. [see [http://www.playbill.com/news/article/104113.html playbill article December 8, 2006] and [http://www.playbill.com/news/article/110239.html playbill article, August 10, 2007] ] Fact|date=August 2007 Tesori and Lindsay-Abaire eventually created two songs for .The director is .