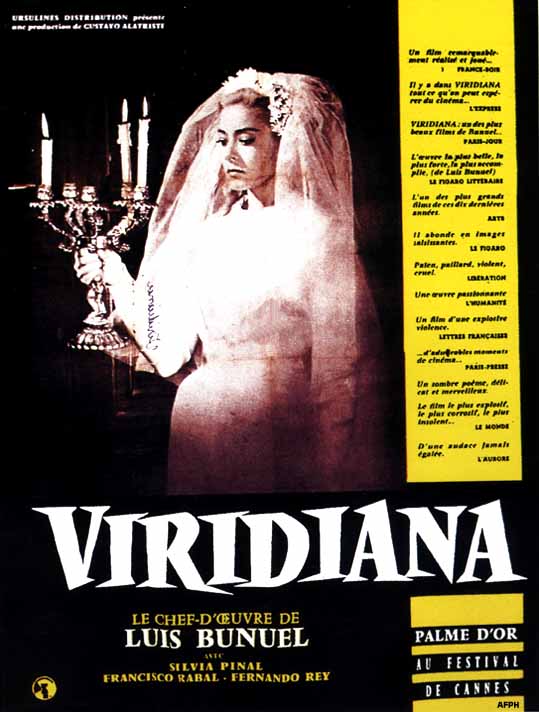 Along with "", "Viridiana" was the winner of the at the 1961 , but it was banned in for sixteen years, due to the condemnation (as "blasphemous") issued by the Vatican.

The film focuses on a young novitiate about to take her vows named Viridiana (), who is told by her Mother Superior that she should visit her uncle, Don Jaime (), her only living relative. After some time on his large country estate, he tries to seduce her, believing that she resembles his deceased wife. Hearing of his desire to marry her, Viridiana attempts to flee the house immediately, but is subdued by Jaime and drugged with the help of his servant Ramona. He takes her to her room and considers raping her in her sleep, but decides otherwise.

The next morning he tells her that he took her ity, and says that therefore she cannot return to her convent. By this means he intends to make her wish to stay, but instead she is disgusted and starts to pack. He tries to rectify the situation by telling her that he lied, hoping it would convince her to stay, but this does little to appease her. He asks for her forgiveness, but she ignores him and leaves the house. She is on the way back to the convent when the authorities stop her, telling her something terrible has happened. Back at the house, her uncle has hanged himself.

Viridiana collects the village paupers, returns to the estate, and installs them in an outbuilding. Shunning the convent, she instead devotes herself to the moral education and feeding of this exceedingly motley group. Meanwhile, Don Jaime's son, Jorge (), moves into the house with his girlfriend, Lucia. He, like his father, lusts after Viridiana, who scorns him.

The members of the household return earlier than expected to find the house in shambles. As Jorge and Viridiana walk around the house in shock, the beggars excuse themselves and leave without explaining their behaviour. Jorge continues to inspect the house upstairs and encounters a beggar who pulls a knife on Jorge. Another beggar comes from behind and breaks a bottle over Jorge's head, knocking him out. When Viridiana arrives, she sees Jorge on the floor and runs to his side, but is then overpowered by the two beggars. Viridiana would surely have been raped except that Jorge, who is tied up, bribes one beggar to kill the other.

Viridiana is a changed woman as the film concludes: her crown of thorns is symbolically burnt. Wearing her hair loosely, she knocks on Jorge's door, but finds Ramona, with Jorge in his bedroom. With "Shake Your Cares Away" on the record player, Jorge tells Viridiana that they were only playing cards, and urges her to join them, a conclusion that is often seen as implying a "".

"Viridiana" was the first feature film Buñuel ever made in his native Spain. After the film was completed and sent by the Spanish cinematographic authority to the Cannes Film Festival, and awarded, the government of tried unsuccessfully to have the film withdrawn, due to the harsh condemnation that the film received, as "blasphemous", from the Vatican official newspaper , and banned its release in Spain. The film was only released there in 1977, when Bunuel was seventy-seven years old. [http://www.criterion.com/asp/release.asp?id=332&eid=475&section=essay]

However the film was acclaimed at Cannes, winning the Palme D'Or. Buñuel himself said that "I didn’t deliberately set out to be blasphemous, but then is a better judge of such things than I am." [http://www.criterion.com/asp/release.asp?id=332&eid=475&section=essay]

But not all critics were in awe of it. , the contemporaneous "" film reviewer, said:

"The theme is that well-intended charity can often be badly misplaced by innocent, pious people. Therefore, beware of charity. That is the obvious moral that forms in this grim and tumorous tale of a beautiful young religious novice who gets into an unholy mess when she gives up her holy calling to try to atone for a wrong she has done. [...] It is an ugly, depressing view of life. And, to be frank about it, it is a little old-fashioned, too. His format is strangely literary; his symbols are obvious and blunt, such as the revulsion of the girl toward milking or the display of a penknife built into a crucifix. And there is something just a bit corny about having his bums doing their bacchanalian dance to the thunder of the "Hallelujah Chorus." [http://movies.nytimes.com/movie/review?res=9E04E6DE1239E43BBC4851DFB5668389679EDE&partner=Rotten%20Tomatoes]

The film was released by the in USA, and on the Directors Suite label in Australia and New Zealand by Madman Entertainment.