Naypyidaw (Burmese: နေပြည်တော်; MLCTS: nepranytau, officially spelled Nay Pyi Taw and Naypyitaw; pronounced [nèpjìdɔ̀]) is the capital city of Burma, also known as Myanmar. It is administered as the Naypyidaw Union Territory, as per the 2008 Constitution.[1] On 6 November 2005, the administrative capital of Myanmar was officially moved to a greenfield 3.2 km west of Pyinmana, and approximately 320 km north of Yangon (Rangoon), the previous capital. The capital's official name was announced on 27 March 2006, Myanmar Armed Forces Day. Much of this planned city is still under construction, which is set to be completed by around 2012.[6] As of 2009, the population was 925,000,[5] which makes it Myanmar's third largest city, behind Yangon and Mandalay. The city is one of the world's 10 fastest-growing cities.[7]

Nay Pyi Daw is generally translated as "royal capital",[8] "seat of the king" or "abode of kings".[3] Traditionally, it was used as a suffix to the names of royal capitals, such as Mandalay, which was called ရတနာပုံနေပြည်တော် (Yadanabon Naypyidaw). The name literally means "royal city of the sun" in Burmese.

Naypyidaw has a short history, having been founded on a greenfield site in the shrubland some 3 kilometres (1.9 mi) west of Pyinmana, and approximately 320 kilometres (200 mi) north of Yangon, with construction starting in 2002.[3] At least 25 construction companies were hired by the military government to build the city, including Asia World and Htoo Ltd.[9] The military government began moving government ministries from Yangon to Naypyidaw on 6 November 2005 at the astrologically auspicious time of 6:37 a.m.[10] Five days later, on 11 November at 11 a.m., a second convoy of 1,100 military trucks carrying 11 military battalions and 11 government ministries left Yangon. The ministries were expected to be mostly in place by the end of February 2006; however, the hasty move led to a lack of schools and other amenities which separated the government employees from their families for the time being. The government originally prohibited families of government workers from moving to the new capital.[11] Military headquarters were located in a separate compound from the government ministries, and civilians have been banned from entering either. Vendors are restricted to a commercial zone near the government offices.

On 27 March 2006, more than 12,000 troops marched in the new capital in its first public event: a massive military parade to mark Armed Forces Day—which is the anniversary of then Burma's 1945 uprising against the Japanese occupation of Burma. Filming was restricted to the concrete parade ground which contains three enormous sculptures—depictions of the Myanmar kings Anawrahta, Bayinnaung and Alaungpaya, who are considered the three most important kings in Myanmar history. The city was officially named Naypyidaw during these ceremonies.[12]

Rationale for moving the capital

Naypyidaw is more centrally and strategically located than the old capital, Yangon. It is also a transportation hub located adjacent to the Shan, Kayah and Kayin states. It was felt that a stronger military and governmental presence nearby might provide stability to those chronically turbulent regions.[13] The official explanation for moving the capital was that Yangon had become too congested and crowded with little room for future expansion of government offices.[3]

Some Western diplomats speculated that the government were concerned with the possibility of foreign attack, as Yangon is on the coast and therefore vulnerable to an amphibious invasion.[14][15] Indian journalist Siddharth Varadarajan, who visited Naypyidaw in January 2007, described the vastness of the new capital as "the ultimate insurance against regime change, a masterpiece of urban planning designed to defeat any putative "colour revolution" – not by tanks and water cannons, but by geometry and cartography".[16]

Naypyidaw is located between the Bago Yoma and Shan Yoma mountain ranges. The city covers an area of 7,054.37 square km and has a population of 924,608, according to official figures.[5] 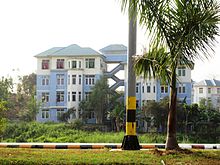 Naypyidaw is organized into a number of zones. As of 2011, the city is still lacking many of the facilities one would expect in a capital city.

The residential areas are carefully organized, and apartments are allotted according to rank and marital status.[17] The city currently has 1,200 four-story apartment blocks.[18] The roofs of apartment buildings are color-coded by the jobs of their residents. For example, Ministry of Health employees live in buildings with blue roofs, while Ministry of Agriculture employees live in those with green roofs.[17] High ranking government officials live in mansions,[19] of which there are about 50. Many of the city's residents, however, live in slums.[20]

High-ranking military officers and other key officials live 11 km away from regular government employees in a complex said to consist of tunnels and bunkers; this area is restricted to the public.[17] The city also hosts a military base, which is inaccessible to citizens or other personnel without written permission.[6] Inside the military zone, the roads have eight lanes to allow small aircraft to land.

The city's Ministry zone contains the headquarters of Burma's government ministries. All the ministry buildings are identical in appearance.[21] A parliamentary complex consisting of 31 buildings[22] and a 100-room presidential palace are also located there.[17] The zone also contains the city hall building, which has many characteristics of Stalinist architecture, but with a Burmese-style roof.

The Hotel zone has a handful of villa-style hotels that dot the hills on the outskirts of the city. There are currently twelve hotels located in or near Naypyidaw. Eight of these are located within the Naypyidaw Hotel Zone, and two are located in Laeway (Lewe) on the Yangon-Mandalay Road.[23]

Naypyitaw Myoma Market is currently the commercial centre of Naypyidaw. Other shopping areas include Thapye Chaung Market and Junction Centre Naypyidaw. Built by the Shwe Taung Development company, Junction Centre is the first privately operated shopping centre project in Naypyidaw. It opened in August 2009.[5] There are also local markets and a restaurant area.

Entrance to the National Herbal Park

Also opened in 2008, the 200-acre (0.81 km2) National Herbal Park has exhibits of plants having medicinal applications from all of the major regions of Burma. There are thousands of plants at the park, representing hundreds of different species.[25]

Behind the city hall, there is a park with a playground and water fountain complex, which hosts a musical light show every night.[17]

The Naypyidaw Zoological Gardens opened in 2008 with some 420 animals and a climate-controlled penguin house. It is the largest zoo in Burma.[26][27] The Naypyidaw Safari Park officially opened on 12 February 2011.[28][29]

Similar in size and shape to the Shwedagon Pagoda in Yangon, Uppatasanti Pagoda was completed in 2009.[30] This new pagoda is named the Uppatasanti or "Peace Pagoda". The stake-driving ceremony for the pagoda was held on 12 November 2006.[31] The invitation card for the ceremony opened with a phrase "Rajahtani Naypyidaw (the royal capital where the king resides)".[32] The pagoda is just 30 cm shorter than the Shwedagon Pagoda.[33] Uppatasanti translates roughly to "Protection against Calamity". It is the name of a sūtra prepared by a monk in the early 16th century. It is to be recited in time of crisis, especially in the face of foreign invasion.[34]

The government has set aside two hectares of land for foreign embassies and headquarters of United Nations missions.[11]

The Myanmar Motion Picture Academy Awards are held annually in Naypyidaw given to the highest achievers in Myanmar cinema.[35] There is a movie theater in the Junction Centre Mall in Naypyidaw. There are two others in nearby Pyinmana, and one in Tatkon Township.[23]

The Naypyidaw Union Territory consists of the city proper (downtown) and eight surrounding townships.[5] Downtown is further divided into four wards. Pyinmana, Lewe, and Tatkon townships were all formerly part of Yamethin District. Oathara Thiri, Dekkina Thiri, Poppha Thiri, Zapu Thiri, and Zeyar Thiri are all new townships currently under construction. As of December 2009, most government ministry offices have been relocated to the administrative capital. Only the offices of ministries' directorates remain in Yangon.[5]

Public transport services are limited between neighborhoods.[17] The eight-lane, 323.2 km Yangon-Naypyidaw highway links Naypyidaw with Yangon directly, and is part of the 563 km-long overall Yangon-Naypyidaw-Mandalay highway. There is also a 20-lane boulevard, but like most roads in the city, it is largely empty.[38]

In August 2011, Russian news media announced that a Russian-based firm would be constructing a 50 kilometres (31 mi) metro line, which would be the country's first underground rail system, underneath Naypyidaw.[39][40]

Naypyidaw has four-lane roads and multilevel, flower-covered traffic circles,[41] although there is only light traffic throughout the city. Government ministries run shuttle buses in the morning and evening to their respective buildings.[42]

The city has a Central Bus Station,[3] and only one taxi company, which is operated by the military.[17]

Motorbikes are banned from some roads within Naypyidaw city limits, including sections of Taw Win Yadana Road , resulting from hundreds of traffic accident-related deaths in 2009.[43]

Naypyidaw railway station (published as Nay Pyi Taw railway station) was opened at milepost No. (233/0), between Ywataw station and Kyihtaunggan station on the Yangon-Mandalay railroad with a station area of 9,000 x 4,000 feet and a covered area of 826.5 acres (3.345 km2). Construction began on 8 December 2006 and Naypyidaw railway station was opened on 5 July 2009, even though the overpass, locomotive shed, concrete road leading up to the station, parking lot, passenger lounge and platform were not yet completed.[44]

Prior to the opening of Naypyidaw railway station, Naypyidaw was served by Pyinmana and Lewe stations, though only Pyinmana station is on the main rail line (which extends from Yangon-Bago-Naypyidaw-Thazi-Mandalay). Lewe station is located on the way from Pyinmana to Kyaukpadaung. It takes nine hours by train to get from Yangon to Pyinmana; trains leave at 12:00 and arrive at 21:30 local time.[46]

Naypyidaw Airport, also known as Ayelar Airport, is located 10 miles (16 km) southeast of the city, between the towns of Ela and Lewe. It is served by all domestic airlines--Air Bagan, Air Mandalay, Myanma Airways and Yangon Airways--with regular flights to Yangon and other cities across the country.[47] Since April 2009, the airport is undergoing major expansion to handle up to 3.5 million passengers per year.[48]

Nay Pyi Taw Hospital opened in 2006.[6] There is also the Defence Services Obstetric, Gynaecological and Children's Hospital, 300-bed facility which is among the teaching hospitals of the Burmese Defence Services Medical Academy. The nearby towns of Lewe, Pyinmana, and Tatkon each have one hospital.[23]

Beginning in 2009, Naypyidaw has CDMA mobile phone coverage. Private telephone lines to employees living in government apartments are not allowed, so public telephones must be used.[11] Naypyidaw is the only city in Burma where electricity is available 24 hours a day.[17][49]