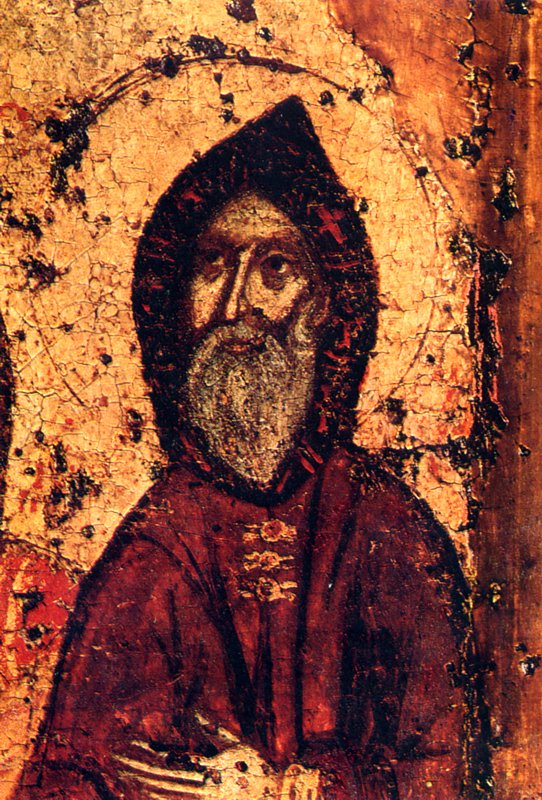 St. Anthony of Kiev (c. 983-1073) was a and the founder of the monastic tradition in the . Also called Anthony of the Caves ( _ru. Антоний Печерский, _uk. Антоній Печерський) he, together with , co-founded (Kiev of the Caves).

St. Anthony is venerated as a , and the founder of in . His falls on . Since the follows the , the day on which his feast is celebrated is currently on the modern . His s have never been found.

He was born in in and was baptized with the name "Antipas". He was drawn to the spiritual life from an early age, and, when he was of age, left for the Greek Orthodox on to live as a . He lived in a secluded cave there overlooking the sea, which is still shown to visitors. In 1051, the gave Anthony the job of expanding monasticism in his native , which had only recently begun its conversion to Christianity.

Anthony returned to Kiev, and found several monasteries founded on the Greek model on order of local princes. These monasteries were not as austere as Anthony was used to from his time on Mount Athos. He instead chose to live in a small four-yard cave which had been dug by the Hilarion.

In 1015 his peaceful austerity was interrupted by the death of , and the subsequent fratricidal war for the throne between Vladimir's sons Yaroslav and Sviatopolk, and Anthony returned to Mount Athos. When the conflict ended, the abbot sent Anthony back to Kiev, ing that many monks would join him on his return.

On his return, Anthony found a small 4-yard cave which Hilarion had dug before his elevation as the first native . Anthony became well known in the area for his strict . He ate rye bread every other day and drank only a little water. His fame soon spread beyond Kiev, and several people began to ask for his spiritual guidance or blessing. Soon, some people even offered to join him. Eventually, Anthony accepted the company of a few of them. The first was a priest named Nikon. The second was .

The new monastery enjoyed royal favor almost from the beginning, although there were occasional problems. When demanded that the son of a wealthy and one of his own retainers be told to leave the monastery, Nikon said he could not take soldiers away from the King of Heaven. This did nothing to placate Iziaslav's anger, and Anthony decided that it might be expedient for him to leave. Anthony returned after Iziaslav's wife requested his return.

Shortly thereafter Anthony had gained 12 disciples. Anthony, devoted to the model of the solitary hermit set by his namesake , left his cave for a nearby mountain so he could continue to live the solitary life. There, he dug another cave for himself and lived in seclusion there. This cave became the first of what would later be known as the .

In time, the first official abbot of the monastery, , was called by Iziaslav to head a new monastery, St. Demetrios, which had been built at the gates of the city. The monks requested Anthony to name the replacement, and he named Theodosius.

As the number of monks grew and crowding became a problem, Anthony requested that Iziaslav give them the hill in which the caves were located. He did so, and the monks built a wooden church and some cells there, encircling the area with a wooden fence. Theodosius continued to consult Anthony in the guidance of the community, and, as the monastery grew, so did Anthony's reputation.

When Iziaslav and his brothers were facing a popular uprising involving the , they came to Anthony for his blessing. They did not get it. Anthony foretold that because of their sins they would be defeated, and that the brothers would be buried in a church they would build. Shortly thereafter Iziaslav left because of the rebellion. He suspected Anthony of sympathizing with the opposition, and arranged to banish Anthony upon his return. Before he could do so, Iziaslav's brother, Sviatoslav, arranged for Anthony to be secretly taken to Chernigov. Anthony dug himself a cave there. The Eletsky Monastery there is said by some to be built on the site of Anthony's cave. Eventually Iziaslav was again reconciled to Anthony, and asked that he return to Kiev.

On his return, Anthony and Theodosius decided to build a larger stone church, to accommodate the ever increasing number of monks. Anthony himself did not live to see the church complete. He died in 1073, shortly after blessing the foundation of the new church, at 90 years old. Shortly before his death, he called the monks together and consoled them about his coming death. He also asked them that his remains be hidden away forever. The monks carried out his request. He was reportedly buried in his cave, but no relics have ever been found. Many however have subsequently come to the cave to pray, and many of them have reported being healed there.

* [http://ocafs.oca.org/FeastSaintsViewer.asp?SID=4&ID=1&FSID=101994 Venerable Anthony of the Kiev Far Caves, Founder of Monasticism in Russia] Orthodox and