Mary Ann Glendon (born October 7, 1938 Pittsfield, Massachusetts) J.D., LL.M., was the United States Ambassador to the Holy See and is the Learned Hand Professor of Law at Harvard Law School. She teaches and writes on bioethics, comparative constitutional law, property, and human rights in international law. She is pro-life and "writes forcefully against the expansion of abortion rights."[1] 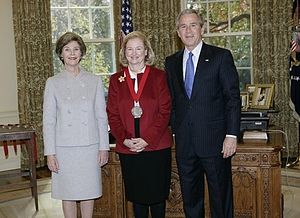 Glendon graduated from University of Chicago Law School, where she served on law review.

Glendon is the author of Rights Talk; A Nation Under Lawyers, and A World Made New: Eleanor Roosevelt and the Universal Declaration of Human Rights. In 1994, she was a signer of Evangelicals and Catholics Together, an ecumenical document aimed at rapprochement between Catholics and Evangelicals. Glendon became the first female President of the Roman Catholic Church's Pontifical Academy of Social Sciences, when she was appointed by Pope John Paul II on March 9, 2004 (she was already a member of the academy since January 9, 1994). In 1995 she was the Vatican representative to the international 1995 Beijing Conference on Women sponsored by the United Nations, where she contested the use of condoms for the prevention of HIV and AIDS. "The Holy See in no way endorses contraception or the use of condoms, either as a family planning measure or in HIV/AIDS prevention programs."[2]

The National Law Journal named her one of the "Fifty Most Influential Women Lawyers in America" in 1998.

Glendon was appointed by President Bush to the President's Council on Bioethics. Her nomination as United States ambassador to the Holy See was announced on 5 November 2007.[3] The U.S. Senate voted to confirm her on December 19, 2007.[4] She presented her Letters of Credence to Pope Benedict XVI on 29 February 2008, and resigned her office effective January 19, 2009.[5]

Glendon was selected by the University of Notre Dame as the 2009 recipient of the prestigious Laetare Medal but declined the award due to the university's controversial[6] decision to host Barack Obama as its commencement speaker and bestow upon him an honorary degree.[7] In light of Obama's strong pro-choice policies,[8] Glendon considered Notre Dame's decision to be in violation of the United States Conference of Catholic Bishops' 2004 pronouncement that Catholic institutions should not give "awards, honors, or platforms" to "those who act in defiance of [Catholic] fundamental moral principles."[9] Glendon also felt that the university was implicitly trying to use her acceptance speech to give the appearance of balance to the event and expressed concern about the "ripple effect" Notre Dame's disregard of the USCCB pronouncement is having on the nation's other Catholic schools.[9]

She later received an award from the National Right to Life Committee at its Pro-Life Awards Dinner in October.[10]

Glendon writes and serves on the advisory council for First Things, an ecumenical journal that encourages a religiously informed philosophy for the ordering of society.

"What is clearly 'old-fashioned' today is the old feminism of the 1970s — with its negative attitudes toward men, marriage and motherhood, and its rigid party line on abortion."[11]