Self-propelled anti-aircraft weapon
"SPAA" redirects here. For an academic conference in the fields of parallel computing and distributed computing, see Symposium on Parallelism in Algorithms and Architectures. 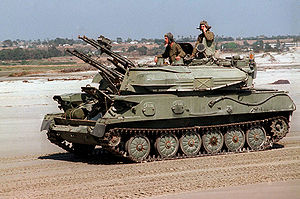 Specific weapon systems used include machine guns, autocannons, larger guns, or missiles, and some mount both guns and longer-ranged missiles. Platforms used include both trucks and heavier combat vehicles such as APCs and tanks, which add protection from aircraft, artillery, and small arms fire for front line deployment.

Anti-aircraft machine guns have long been mounted on trucks, and these were quite common during World War I. A predecessor of the WW2 German "88" anti-aircraft gun, the WWI German 77 mm anti-aircraft gun, was truck-mounted and used to great effect against British tanks.

The British QF 3 inch 20 cwt was mounted on trucks for use on the Western Front.

Between the wars the British developed the Birch gun, a general purpose artillery piece on an armoured tracked chassis capable of maintaining formation with their current tanks. The gun could be elevated for anti-aircraft use.

Among early pre-war pioneers of self-propelled AA guns were the Germans. By the time of the war, they fielded the SdKfz 10/4 and 6/2, cargo halftracks mounting single 20 mm or 37 mm AA guns (respectively). Later in the war similar German halftracks mounted quadruple 20 mm weapons.

Larger guns followed on larger trucks, but these mountings generally required off-truck setup in order to unlimber the stabilizing legs these guns needed. One exception to this rule was the Italian Cannone da 90/53 which was highly effective when mounted on trucks, a fit known as the "autocannoni da 90/53". The 90/53 was a feared weapon, notably in the anti-tank role, but only a few hundred had been produced by the time of the armistice in 1943.

Other nations tended to work on truck chassis. Starting in 1941, the British developed the "en portee" method of mounting an anti-tank gun (initially a 2 pounder) on a truck. This was to prevent the weapon from being damaged by long-distance towing across rough, stony deserts, and it was intended only to be a carrying method, with the gun unloaded for firing. However, crews tended to fire their weapons from their vehicles for the mobility this method provided, with consequent casualties.[1] This undoubtedly inspired their Morris C9/B (officially the "Carrier, SP, 4x4, 40 mm AA"), a Bofors 40 mm AA gun mounted on a chassis derived from the Morris "Quad" Field Artillery Tractor truck.[1] Similar types, based on 3-ton lorries, were produced in Britain, Canada and Australia, and together formed the most numerous self-propelled AA guns in British service.[1]

The U.S. Army brought truck-towed Bofors 40 mm AA guns along with truck-mounted units fitted with mechanized turrets when they sailed, first for Great Britain and then onto France. The turrets carried four .50 inch (12.7 mm) machine guns, which were designed to be adjusted to converge at the single point where enemy aircraft were expected to appear at low altitude in conduction of strafing runs directed at large infantry and field artillery units.

Interest in mobile AA turned to heavier vehicles with the mass and stability needed to easily train weapons of all sizes. Probably the desire, particularly in German service, for anti-aircraft vehicles to be armoured for their own protection also assisted this trend.

The concept of an armored SPAAG was pioneered by Hungary during World War II Hungary by producing the 40M Nimrod based on the Luftvärnskanonvagn L-62 Anti II license acquired from Sweden. Germany followed later with their "flakpanzer" series. German World War II SPAAGs include the Möbelwagen, Wirbelwind, Ostwind and Kugelblitz. Other forces followed with designs of their own, notably the American M16 created by mounting quadruple M2 machine guns on a M3 Half-track.

The British developed their own SPAAGs throughout the war mounting multiple machine guns and light cannon on various tank and armoured car chassis and by 1943, the Crusader AA tanks, which mounted the Bofors 40 mm gun or two-three Oerlikon 20 mm cannon. Although used during the Normandy landings, by that point German aircraft were contained by the Allies own air forces and they were largely unneeded.

On occasion SPAAGs have been used as very effective direct fire weapons against infantry, for example by American forces during late World War II, in Korea against mass infantry assault, and extensively during the Vietnam War, where for example the U.S. M42 Duster SPAAG (based on a light tank) was employed purely for this purpose. Nowadays the system is rather superfluous due to the lack of a threat from sophisticated gunship helicopters, but development continues.[citation needed]