Operation Michoacan
Mexico is supported by the United States in this conflict through the Mérida Initiative.

Operation Michoacán is a joint operation by Federal, Police, and Mexican Military, to eliminate drug plantations and to combat drug trafficking. Initiated on December 11, 2006, the operation is under the supervision of The Secretary of Public Safety, Attorney General of Mexico (PGR), Secretary of the Interior, Mexican Navy, and Mexican Army.

In some occasions state and municipal police have participated despite not being part of it.The joint operation has distinguished itself as one of the operations against organized crime, drug trafficking in this case, which has employed the largest number of military and police elements, as well as most state forces.

On December 12, President Felipe Calderón ordered the military to send 4,000 troops to his home state of Michoacán, where drug-related crime has left over 500 dead. Troops were assigned to areas under the control of organised criminals, conducting raids, making arrests and establishing control points on highways and secondary roads.[1] In 2007 May 8 in Apatzingan, Michoacán, Soldiers from the 51st Infantry Battalion engaged drug traffickers. Soldiers driving HMMWV armed with Mk 19 grenade launchers killed 4 cartel gunmen, 3 soldiers were reported wounded.[2] 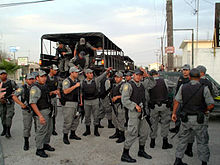 The arrest of Arnoldo Rueda & retribution

Operation Michoacán is the first stage of the so-called War Against Drug Trafficking implemented by the federal government of President Felipe Calderón.The joint operation has been questioned about the human rights violations that may have occurred, given the military presence among the civilian population of the state of Michoacán. The chairman of the National Commission on Human Rights, José Luis Soberanes, in May 2007, charged that had been at least 53 complaints of human rights violations by the military to the civilian population.[21]