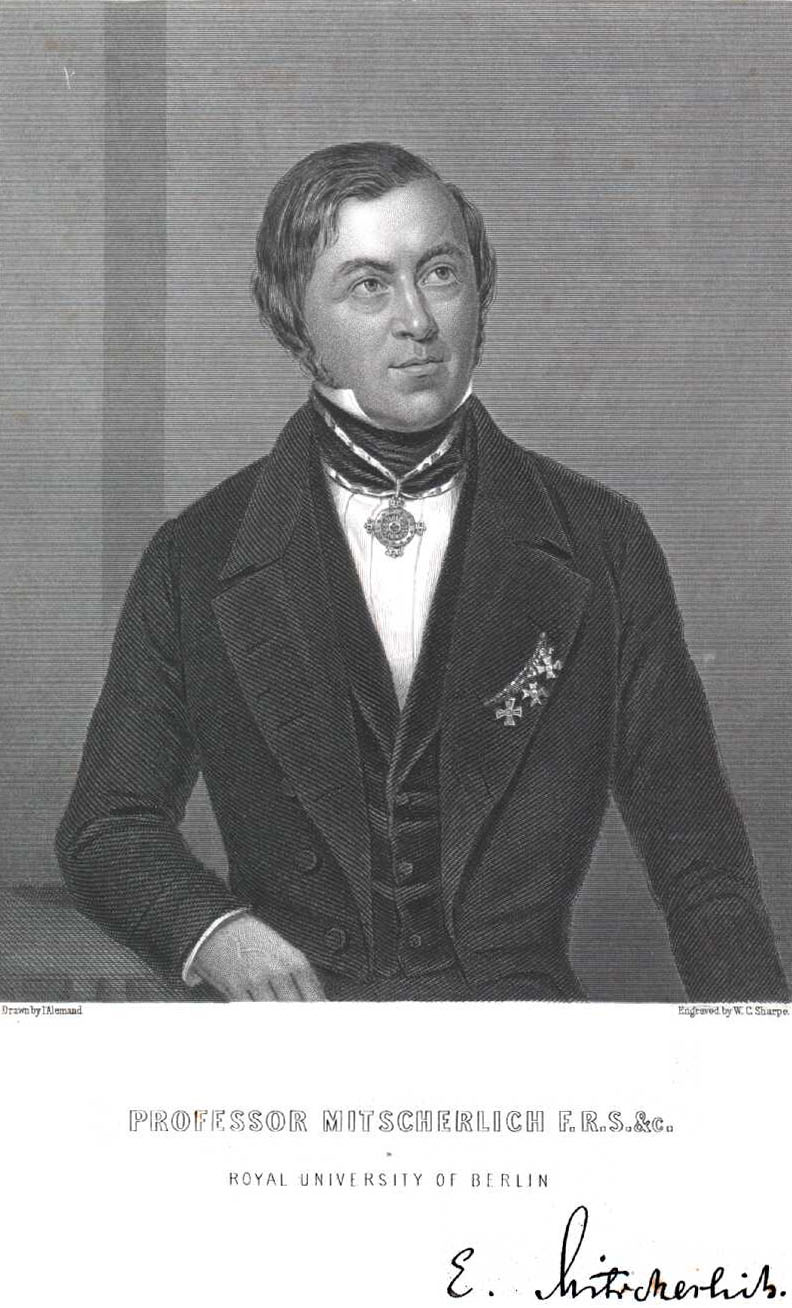 Eilhard Mitscherlich (7 January 1794 &ndash; 28 August 1863) was a German , who is perhaps best remembered today for his law of isomorphism (1819), which states that compounds crystallizing together probably have similar structures and compositions. This relationship was used by Berzelius in early attempts to assign relative masses to the elements.

Mitscherlich was born at Neuende in the , where his father was pastor. His uncle, (1760-1854), professor at Göttingen, was in his day a celebrated scholar. He was educated at Jever under the historian , when he went to Heidelberg in 1811, and devoted himself to , giving special attention to the . In 1813 he went to to obtain permission to join the embassy which was sending to Persia.

The events of 1814 put an end to this, and Mitscherlich resolved to study in order that he might enjoy that freedom of travel usually allowed in the East to physicians. He began at Göttingen with the study of , and this so arrested his attention that he gave up the journey to Persia. From his Gottingen days dates the treatise on certain parts of Eurasian history, compiled from manuscripts in the university library and published in Persian and in 1814, under the title "Mirchondi historia Thaheridarum historicis nostris hucusque incognitorum Persiae principum".

In 1818 Mitscherlich went to Berlin and worked in the laboratory of (1767-1851). There he made analyses of s and s, s and s, confirming the conclusions of as to their composition; and his observation that corresponding phosphates and arsenates lize in the same form was the germ from which grew the theory of isomorphism, which he communicated to the Berlin Academy in December 1819. In that year Berzelius suggested Mitscherlich to the minister as successor to at Berlin. Altenstein did not immediately carry out this proposal, but he obtained for Mitscherlich a government grant to enable him to continue his studies in Berzelius' laboratory at Stockholm. He returned to Berlin in 1821, and in the summer of 1822 he delivered his first lecture as extraordinary professor of chemistry in the university, where in 1825 he was appointed ordinary professor.

In the course of investigating slight differences discovered by in the angles of the rhombohedra of the s isomorphous with calc-spar, Mitscherlich observed that the angle in the case of calc-spar varied with the temperature. On extending this inquiry to other crystals, he observed a similar variation, and was thus led, in 1825, to the discovery that aelotropic crystals, when heated, expand unequally in the direction of dissimilar axes. In the following year he discovered the change, produced by change of temperature, in the direction of the optic axes of . His investigation, also in 1826, of the two crystalline modifications of threw much light on the fact that the two s calc-spar and have the same composition but different crystalline forms, a property which Mitscherlich called isomorphism. [cite journal | author=S. I. Morrow | title= One Hundred and Fifty Years of Isomorphism | journal = Journal of Chemical Education | year = 1969 | volume = 46 | pages=580–584 ] [cite journal | author = (Anonymous) | title = Eilhard Mitscherlich (Obituary)| journal = Proceedings of the Royal Society of London | year = 1864 | volume = 13 | pages = ix-xvi ]

In 1833 Mitscherlich made a series of careful determinations of the vapour densities of a large number of volatile substances, confirming the law of . He obtained in 1827 and showed that its s are isomorphous with the s, while a few years later he proved that the same thing is true of the s and the sulphates, and of the s and the s. He investigated the relation of to and to other derivatives. In 1829-1830 he published his "Lehrbuch der Chemie", which embodied many original observations. His interest in led him to study the of volcanic regions, and he made frequent visits to the with a view to the discovery of a theory of volcanic action. He did not, however, publish any papers on the subject, though after his death his notes were arranged and published by Dr. J. L. A. Roth in the Memoirs of the Berlin Academy (1866).

In December 1861 symptoms of made their appearance, but Mitscherlich was able to carry on his academic work until December 1862.

He died at near Berlin in 1863 and was buried in the St Matthäus Kirchhof Cemetery in [chöneberg close to the (eventual) gravesites of and .

Mitscherlich's published papers are chiefly to be found in the Ablsendlungen of the Berlin Academy, in Poggendorff's "Annalen", and in the "Annales de chemie et tie physique".

The fourth edition of Mitscherlich's "Lehrbuch der Chemie" was published in 1844-1847; a fifth was begun in 1855, but was never completed.

* "Eilhard Mitscherlich: Prince of Prussian Chemistry" by Hans-Werner Scuhtt, 1997, ISBN 0-8412-3345-4
* [http://books.google.com/books?id=a-oAAAAAYAAJ&pg=PP13&lpg=PP13&dq=hittorf+obituary&source=web&ots=aN4pgaUold&sig=JFTs_ki78H-LWBkSfM3oF_ikzxo#PRA1-PA527,M1 Obituary] of Eilhard Mitscherlich in "Proceedings of the Royal Society of London", volume XIII, 1864 (pages ix - xvi, near the end of the volume)
*