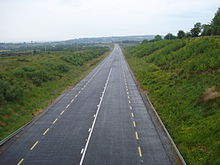 The N21 road is a national primary road in Ireland. The route runs from the M20 outside Limerick to Tralee with connecting roads to other parts of County Kerry. It is 93 km (58 mi) in length. It runs through the towns of Abbeyfeale, Newcastlewest, Adare and the village of Templeglantine. Prior to October 2010 the N21 also ran through the town of Castleisland. The town has recently been bypassed. It is also home to one of the most dangerous stretchs of road in the country, known locally as Barnagh, between Newcastlewest and Templeglantine claiming 4 lives in 4 weeks, bringing the total deaths there to 5 already in 2010. This section of road is currently under severe scrutiny following a group known as the N21 Barnagh Road ReAlignment Petition putting pressure on the authorities, with strong public backing, to realign this section.

The N21 route commences about 8 km (5.0 mi) southwest of Limerick city, just beyond Patrickswell. At the junction, which is reached by the main M20 motorway, the M/N20 diverges south to Cork and the main dual-carriageway becomes the N21 west.

Prior to the 2001 opening the new dual-carriageway, traffic to Kerry left the city on the old N20 in a southwest direction on the Ballinacurra Road through Raheen and then went through Patrickswell to the beginning of the N21.

The new 11 km (6.8 mi) M20/N21 dual-carriageway route begins at junction 1 on the Rosbrien Interchange as the M20 where it leaves the M7/N18 Limerick Southern Ring Road, and bypasses the Limerick suburbs of Dooradoyle, Raheen and Patrickswell, and continues, as the N21, almost to Adare. At this point the N21 becomes a standard two-lane road and flows through the main street of the scenic village.

The N21 then runs by Croagh and Rathkeale, which were both bypassed in 1990, before entering Newcastle West and filtering through the town. Further along the route the N21 passes through Templeglantine, before going through the major town of Abbeyfeale.

The road continues southwest, at the townland of Kilkinlea it crosses over the River Feale into County Kerry passing by Knocknagoshel and heading towards Castleisland. A new 7 km (4.3 mi) roadway from Abbeyfeale to Knocknagoshel, bypassing the accident-prone Headleys bridge near Knocknagoshel opened in July 2006. The remainder of the road to Castleisland was realigned in the 1980s. A 6 km (3.7 mi) section north of Casleisland was overlayed and brought up to standard in 1999.

At Castleisland, the N21 heads west to Tralee. The short N23 continues southwest to Farranfore, allowing traffic to continue south along the N22 to Killarney. A new 11 km (6.8 mi) road from Castleisland to Ballycarty near Tralee was opened in early 2001. This was followed by a new 3 km (1.9 mi) section into Tralee, opened in April 2005.

The Castleisland Bypass was the only major national road project starting construction in 2009. Construction work completed in October 2010. The new road was officially opened on Friday, October 22nd 2010, by Minister for Defence Tony Killeen. The route consists of 5.3km of type 2 dual carriageway and connects the N21 to the N23 bypassing Castleisland to the west of the town. [1]

The planned route of the Adare bypass (click for larger image)

The Adare bypass is in the design phase and when finished, will carry the N21 around the village of Adare, Limerick. The road will be built as a dual carriageway and will link up with the northern section of the future M20 motorway from Patrickswell to Cork. It will spur off before Croom and link to the N21 south of Adare.[2]

A 33 km (21 mi) Rathkeale/Abbeyfeale road scheme, with a bypass of Newcastle West and Abbeyfeale was at the planning stage in 2006. As of October 2008 it has not advanced beyond planning stage.