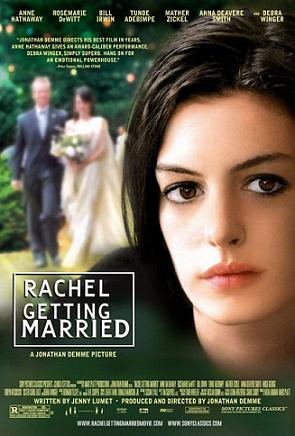 "Rachel Getting Married" is a 2008 directed by , and starring , , and . The film competed for the 's top prestigious prize, the and was released at the . The film was released in select theaters on , .

When Kym (), an ex-model who has been in and out from rehab for the past 10 years, returns home for the wedding of her sister Rachel (), she brings a long history of personal crisis and family conflict along with her. The wedding party's abundant cast of friends and relations have gathered for an idyllic weekend of feasting, music and love, but Kym with her black-comic one-liners and knack for bombshell drama is a catalyst for long-simmering tensions in the family dynamic.

The film is directed by , and was shot in . The working title for the film was orginally "Dancing with Shiva", but was officially changed to "Rachel Getting Married".

The film opened in the 65th edition of the , where it was among twenty-one others films competing for the top prize, the . Other Hollywood films that competed include, "", and "The Wrestler", which later went on to win. The film also opened in 's on , .