The Day That Never Comes

The Day That Never Comes 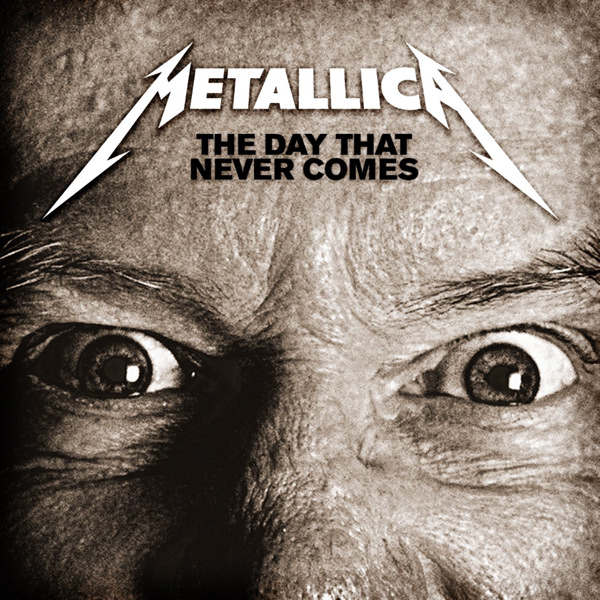 "The Day that Never Comes" is perhaps the most downbeat track on "Death Magnetic", and could be said to be reminiscent of Metallica's single "One," which won a in 1990. Like previous ballads and downbeat songs by Metallica, it is the fourth track of the album. "" has also compared the song to the likes of . [ [http://www.roadrunnerrecords.com/BlabberMouth.Net/news.aspx?mode=Article&newsitemID=98355 Blabbermouth.net] June 4, 2008. Last accessed August 1, 2008] The intro starts out with clean guitars that carry into the verses, while the choruses are backed with heavily distorted guitars. The bridge speeds up gradually and eventually leads into fast paced harmony between the guitars and a long guitar solo by Hammett, a build-up comparable to that of "One" and "Fade to Black." The ending of the song, unlike the previously mentioned ballads, is purely instrumental, featuring numerous solos and chord progressions.

The video depicts two Marines riding a in a desert and getting hit by an explosion. After they take cover and look for the attacker, one of them reveals that he suffered a wound. His friend tries to cover it up and call for help, and while he's eventually taken to safety via a helicopter mission, it is implied that he might have not recovered from the incident. The video then forwards to another situation involving the remaining Marine in another group riding a and getting stopped in the road by a car (a ) and a civilian in front of it holding a in the air. The group, suspecting it might be an ambush, circles around the car and keeps the man at gunpoint, only to find a woman in in the back seat. They order her out of the car, but she approaches the protagonist, who keeps holding her at gunpoint. The video then climaxes when the Marines nervously look at each other, fearing that she might be a , but eventually the Marine lowers his gun and signals to the rest to do the same. The group helps the man to the car, and the protagonist remains looking at the sky.

On start date|2008|8|4, in an MTV interview, the song lyrics were said to have been made to tackle the subject of forgiveness and resentment. The band's drummer claimed that the lyrics were inspired by a father-son relationship. The content of the video itself is of a different theme or setting that what the lyrics themselves were written about, a second interpretation. The video is said to be in a war background in comparison to the "One" video, but will not make any modern day references as in the war in Iraq and the Middle East (although the video depicts images of Middle East war in present day, they do not imply any political statement).Frontman spoke on the lyrics of the song and also the radical difference of the song lyrics and vision intended to the music video.Lead guitarist and Ulrich also commented by stating ultimately, the concept of the video deals with humanity and the relationships between human beings and how your basic sense of humanity can override any sort of politicized situation.

* [http://quicktime.warnerbrosrecords.com/Metallica/ The Day That Never Comes] (the music video as video via )