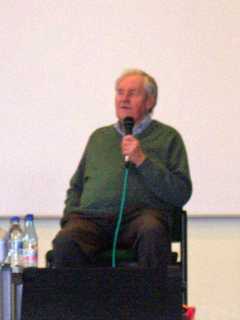 Richard David Briers, CBE (born 14 January 1934) is an English whose career has encompassed the theatre, television, film and radio.

Briers was born in , , , the son of Joseph Benjamin Briers and Morna Phyllis (née Richardson). [ [http://www.filmreference.com/film/67/Richard-Briers.html Richard Briers Biography (1934-)] ] He is the second cousin of actor . He spent his childhood in Raynes Park and . His father drifted between jobs, while his mother dreamt of a career in showbiz, something she could not achieve for financial reasons.

It was while at Liverpool Rep, that he met his future wife Ann Davies, who was acting as stage manager, and has acted on television since the 1960s. Soon after meeting, he borrowed £5 from his mother, bought an engagement ring and they were married within six months. They have two children, one of whom, Lucy, is also an actress.

Briers got his first leading role on television in "" in 1962. He was cast in this role by writers and , who had spotted him in the West End. The following year Briers got the lead male role in "" opposite . His other early appearances included "", "The Seven Faces of Jim", "The Morecambe & Wise Show", and the narrator in several episodes of "".

In 1975, Briers was given one of the lead roles in the successful sitcom "The Good Life", where he played Tom Good, a draftsman who decides, on his 40th birthday, to give up his job and try his hand at . In 1978, he starred opposite his "The Good Life" co-star in the televised version of "".

Briers has spent much of his career in theatre work, including appearances in plays by Shakespeare and . In 1967, one of his earliest successes was playing alongside and in the London production of Alan Ayckbourn's "Relatively Speaking". Briers was a member of Kenneth Branagh's , taking on classical and Shakespearean roles including in "" and the title roles in "" and "".

Briers is also a familiar voice actor, with numerous commercials, including adverts for the in which he was the voice of the company's Griffin symbol, and the animated children's series "" and "" to his credit. He also provided the voice of Fiver in the 1978 film adaptation of "Watership Down".

His work in includes playing in a series of adaptations of novels by , Dr. Simon Sparrow in 's adaption of Doctor At Large, and later the play "", commissioned for by . Briers has also appeared in several of Kenneth Branagh's films, such as "Henry V" (as Bardolph), "Much Ado About Nothing" (as Signor Leonato), and as in "Hamlet".

Richard Briers was appointed the OBE in 1989, and in 2003 he became a CBE. [cite news|url=http://news.bbc.co.uk/1/hi/entertainment/tv_and_radio/2988170.stm|title=Richard Briers' classic career|first=|last=|publisher=|date=13 June 2003] Because of Terry Thomas's , Briers became President of the . [Parkinson's Disease Society annual report 2003]