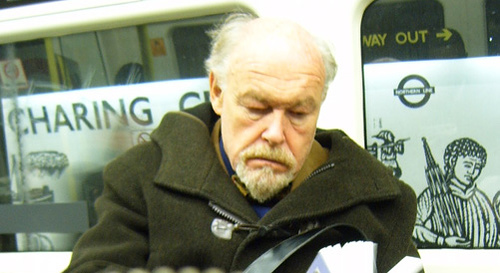 Timothy West CBE (born ) is an English film, stage and television . He was born in , of the family, and educated at the , a boys' in in London and also at in Bristol, where he was a classmate of . His father was the actor Lockwood West. Timothy is married to the actress and with her, prominently supports the British Labour Party. The couple are both patrons of the Lace Market Theatre in .

West's craggy looks ensured a career as a rather than a leading man. He began his career as an at the Wimbledon Theatre in 1956, and followed this with several seasons of repertory theatre. He acted at the in 1959 and was with the in 1965 at Stratford where he appeared in Comedy of Errors, Timon of Athens, The Jew of Malta, Love's Labour's Lost and Peter Hall's outstanding production of the Government Inspector at the with Paul Scofield, Eric Porter, Donald Burton, Stanley LeBor, Bruce Condell and Tim Wylton among others. He was Artistic Director of the Forum Theatre, from 1980-81 and was appointed Director-in-Residence at the in 1982.

Having spent years as a familiar face who never quite became a household name, his big chance came with the major television series, "Edward the Seventh" (1975), in which he played the title role and his real-life sons, Samuel and Joseph, played the sons of King Edward VII as children. Other major roles have included parts in the films, "" (1972), "The Thirty-Nine Steps" (1978) and "" (1987).

West also made a brief appearance in the series in 1985, starring as the redoubtable Miss Jane Marple, in a "" as the notorious Rex Fortescue.

In 1997, he played Gloucester in the BBC television production of "". He is the son of the actor (Harry) .

In 2001, West played the older Maurice in "Iris", while his actor son, , played young Maurice.

In 2004, he toured with the Company as Director of the production of "", also singing the role of Sir Joseph Porter. He was replaced in the singing role by for the Perth and performances.

He is president of the , and a supporter of the charity .

West has also appeared as the presenter for Midlands () Waterworld.

*imdb name|id=0922367|name=Timothy West
*The latest (2008) series of 'Water World' is available for watching on ITV's site at http://www.itvlocal.com/central/programmes/