Anti-Flag is a punk rock band from Pittsburgh, Pennsylvania in the United States, formed in 1988. The band is well known for its outspoken political views. Much of the band's lyrics have focused on fervent anti-war activism, criticism of United States foreign policy, corporatism, U.S. wealth distribution, and various sociopolitical sentiments. The line-up includes singer/guitarist Justin Sane and drummer Pat Thetic, who founded the band; later members are guitarist Chris Head, and singer/bassist Chris #2 who replaced Jamie "Cock" Towns, who had replaced original bassist Andy Flag in 1997 following his departure one year prior. Anti-Flag is known also for their advocacy of progressive political action groups such as Greenpeace and Amnesty International. Most recently, the band has focused criticism on the United States bailouts.[2]

Anti-Flag was formed in 1988 by singer/guitarist Justin Sane and drummer Pat Thetic. During the band's early years, various guitarists and bassists moved in and out of the band, including Justin's sister, Lucy Fester (aka Lucy Geever-Conroy) formerly of Chicago band Toothpaste. The band failed to solidify, and it fell apart after playing just one show.[3] In 1993, Justin and Pat reformed the band, now with Andy Flag on bass.

In 1997, the band released their first album, Die For the Government, on New Red Archives. Andy Flag left the band in the summer of 1997 because of personal disputes between himself and Justin. For a brief time after Andy's departure in 1997, Sean Whelan of Pittsburgh band the Bad Genes filled in on bass. It was during this time that Sean was also playing in another band (57 Defective) with guitarist Chris Head, whom he introduced to the band.

In early 1997, Pittsburgh guitarist Chris Head began filling in on bass. In late 1997, Jamie Cock took over as the new bassist, moving Chris Head over to second guitar, which he preferred. The current line-up finalized in 1999 when Chris Barker, also known as Chris #2, replaced Jamie Cock on bass.

In 1998, the band released their second full-length release, Their System Doesn't Work For You. The album contained all nine Anti-Flag songs from the 1996 Anti-Flag/d.b.s. (Death By Stereo) split album North America Sucks, as well as 10 new unreleased songs. The band decided to release the album independently, and Their System Doesn't Work For You became the debut release for the band's own A-F Records.

In 1999, Anti-Flag released the album A New Kind of Army on Go-Kart Records/A-F Records. The album addressed topics such as abortion, political corruption, racism, fascism, troubled youth, police brutality, and unity within the American youth. The cover art page unfolded into a poster featuring the phrase "Too smart to fight. Too smart to kill. Join now. A new kind of army." In addition to this, the band had a disclaimer at the bottom of its album cover saying,"Anti-Flag does not mean Anti-American. Anti-Flag means anti-war. Anti-Flag means unity."

In 2000, Anti-Flag was invited to participate in Vans Warped Tour. During this time, the members of Anti-Flag met NOFX's Fat Mike, owner of the Fat Wreck Chords record label. This meeting spawned a friendship that would lead to Anti-Flag's release of two albums on the label. 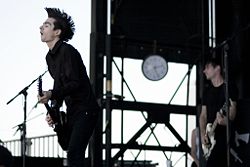 In 2001, Anti-Flag teamed with punk music producer Mass Giorgini to record the album Underground Network, released on Fat Wreck Chords. The release of the album is arguably the band's breakout from the hardcore underground to a more mainstream spotlight. The album continued to address the issues of fascism (specifically neo-Nazis infiltrating the "hardcore scene") and the United States' foreign policy. The album was the first to contain the now-commonplace booklet filled with essays from historians and political commentators, most notably Professor Howard Zinn. In February 2002, Anti-Flag released the album Mobilize on A-F Records. The album featured eight new studio tracks as well as eight live tracks of songs from other albums. In the wake of the September 11th terrorist attacks on the United States, Anti-Flag spoke out against the push for war with the album's title track "911 for peace". During this time, many music stores pulled Anti-Flag's records from shelves, as their music was labelled as "anti-American."[4] In 2003, Anti-Flag released the album The Terror State on Fat Wreck Chords. The album primarily focused on criticizing the Bush Administration's handling of the War on Terrorism. Again, the album contained a booklet full of essays from the band as well as other political commentators. The album contains a song whose lyrics were originally written by Woody Guthrie entitled "Post-War Breakout." The track's music was arranged by the members of Anti-Flag, as Guthrie had never committed the arrangements to paper. 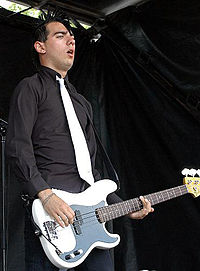 On October 8, 2004, U.S. Representative Jim McDermott gave a speech in the House of Representatives, praising Anti-Flag for their work in encouraging young people to register and vote.[5]

In 2005, Anti-Flag signed a two-album record contract with major label RCA. In an interview with British newspaper The Guardian, Justin Sane explained the band's move to a major label:

We've been approached by the major labels over the past seven or eight years but we thought we were having an impact where we were. They were never willing to give us complete control. This time they were willing to give us complete control over what we record, the artwork, who we tour with. We won't be censored. If there was ever a time to take a chance to be heard on a mass scale then this is the time. I feel like we've been a voice in the wilderness for too long.[6]

The first of these two albums, For Blood and Empire, was released on March 21, 2006. The album's main focus is the band's criticism of the mishandling of the War on Terrorism by the United States Government. The song 'This Is The End (For You My Friend)' from the album For Blood and Empire is featured in the video game Madden NFL 2007 and on NHL 07, and strays from the theme of war and back towards troubled youth. They finished their huge "War Sucks, Let's Party" United States headlining tour in April and work on some side projects like African Well Fund and Start to Finish MS now.

Throughout Anti-Flag's career, many other bands have been added to the roster of the band's own label, A-F Records. These bands include The Code, Pipedown, Much the Same, The Vacancy, The Unseen, Modey Lemon, Thought Riot, Tabula Rasa, and more.

On November 25, Anti-Flag revealed on their homepage that their newest album was titled The Bright Lights of America. Produced by Tony Visconti (of David Bowie, T. Rex (band) and Morrissey fame), it was released on April 1, 2008. The single "The Bright Lights Of America" was released exclusively on iTunes on February 12, 2008. A video of the song was released some weeks later.

In 2008, on tour with Canadian band Billy Talent in Europe, Justin Sane and Chris#2 joined Billy Talent singer Ben Kowalewicz and guitarist Ian D'Sa, singing their new song "Turn Your Back" from their upcoming unreleased album. The two also play on the single version of the song.

In March 2009, Anti-Flag were forced to cancel a series of tour dates after Justin Sane broke his collar bone landing awkwardly whilst jumping off the stage to stop a fight which broke out in the crowd at the UEA LCR in Norwich.[7]

Beginning on September 30, 2008, Chris#2 began to post on his blog, at nowarwithoutwarriors.blogspot.com [5], that the band had begun to work on their seventh studio album. On December 2, Anti-Flag began to record their record, starting with "The Economy is Suffering... Let It Die".

On March 31, 2009, Anti-Flag announced that their next CD, The People or the Gun, would be released on SideOneDummy on June 9, 2009. The band recorded the album in a home studio they build themselves. On Anti-Flag.com, the first track of the album "Sodom, Gomorrah, and Washington DC (Sheep in Shepherd's Clothing)" can be listened to. On May 1, 2009, the band performed a full set of The Clash covers at Hoodwink in East Rutherford, New Jersey.[8]

In September 2009, Anti-Flag was slated to play a show during a G-20 protest that was taking place in their home town of Pittsburgh, but the promoter canceled the show due to severe parking restrictions and police presence in the immediate vicinity of the venue. However the band continued to personally take part in the protests.

In November 2009, Anti-Flag showed their support to the protesting students in Vienna. They gave a speech at the main building of the Vienna University that the students had taken over and also had one of the student representatives speak at their two shows in Vienna.

In January 2010, Anti-Flag completed a full US tour supported by Aiden and Cancer Bats with various bands filling another supporting slot and local bands opening as many of the shows as possible. The tour was sponsored by Amnesty International, Peta 2, Greenpeace and Innes Clothing (who supported a clothing drive for local homeless and youth shelters). The band followed the US tour, with an Australian tour, playing the Soundwave Festival dates in February 2010, with bands such as AFI, Paramore, Escape the Fate, A Day to Remember, HIM and more, as well as playing two headlining dates supported by Alexisonfire and Comeback Kid.

Throughout the summer of 2010, the band playing various festivals such as Ruisrock and Woodstock en Beauce, as well as playing the few last dates of the Vans Warped Tour in August. September 2010 saw the band headlining a Canadian tour with support from the Menzingers, which was followed by the European Vans Off the Wall Music Tour in October, with supporting acts The Swellers and Pulled Apart by Horses.

The band made their live comeback in March 2011, while headlining a South American tour with This Is a Standoff, and then supporting My Chemical Romance on two dates in the US in April. In May–June 2011, the band returned to Europe to play the Slam Dunk Festival dates, as well as supporting System of a Down on June 2 in Milan, Italy.

On June 21, 2011, frontman Justin Sane has announced that Anti-Flag is working on material for a new album, which they hope to release this fall, with working title of Magnum. Sane has also announced plans for him to record a new solo album in the coming future, as he's been working on some folk oriented solo material as well.[9]

Anti-Flag have been involved with activism throughout their musical career. This has included starting the activism groups The Underground Action Alliance [6], Military Free Zone [7] (a group to protest a clause in the No Child Left Behind Act, which gave military recruiters automatic access to students' personal details) and The Bright Lights [8].

They have been involved in performing at multiple protests, including two in support of Rage Against The Machine.

Most recently, the band played an acoustical stet at the Occupy Wall Street demonstration in New York City on October 8, 2011. [11]

They also regularly support political organisations which include:

The band's song "Die For Your Government" was sung by anti-war protesters who briefly blocked a road to prevent US troops from deploying to Iraq in August 2010.[12][13][14][15] They have appeared in the 2010 music documentary Sounds Like A Revolution, about new protest music in America.

The Gun Star is the symbol for the band Anti-Flag, designed by Anti-Flag guitarist Chris Head. It was first used on the cover of the album Mobilize. It was later used on merchandise. It is made up of a number of broken M16 rifles in the form of a star shape. It is not infrequent for fans of Anti-Flag to get a Gun Star tattoo. Also, they used the O & X superposed symbols on Die for the Government LP frequently.