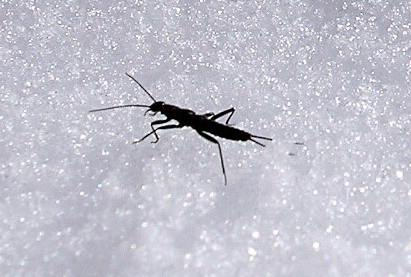 Capniidae, the small winter stoneflies, are a family of s in the order (Plecoptera). They constitute one of the largest stonefly families, containing some 300 distributed throughout the . Their closest relatives are the (). [Nelson (1996a,b)]

Many species are endemic to small ranges, perhaps due to the family's tendency to evolve tolerance for cold (isolating populations in mountain valleys) and winglessness (inhibiting dispersal)

Nymphs of small winter stoneflies typically have a very elongated and slender body, similar to those of (). However, the groove along the , from segment 1 to 9, is generally very pronounced.

The nymphs dwell in the , the interface between stream water and . Only immediately before moulting into the adult form will the nymphs move out of the substrate and appear on the . Thus, although they may be plentiful in clean rivers and streams, they are seldom encountered in standard samples of .

Often, the family Capniidae is considered as to , with the Capniinae being inserted at that rank. However, this is rather pointless; in any case the , and of the small winter stoneflies are highly confused. There appear to be two very basal genera and presumably two larger s which conceivably could be considered subfamilies. However, the phylogeny of the Capniidae is by no means robustly resolved, with about one-third of the named genera of uncertain position. Hence, any subdivision beyond the generic level is premature.

Furthermore, the "Capnia" is probably not and in serious need of splitting up. The "" and its closest relatives would retain their genus name; they are closely related to "". The n species at least for the largest part are closer to ""; other "Capnia" are closest to "" as it seems. Finally, there is a fourth group of rather uncertain position in the main assemblage of Capniidae.

A rough layout of the suspected phylogeny can be given as follows: