Chandi
For the town in India, see Chandi, Bihar.

Chandi (Sanskrit: चण्डी, Caṇḍī) or Chandika (Caṇḍīka) is the supreme Goddess of Devi Mahatmya (Sanskrit: Devīmāhātmyam, देवीमाहात्म्यम्) also known as Chandi or Durga Sapthashati. Chandi is described as the Supreme reality who is a combination of Mahakali, Maha Lakshmi and Maha Saraswati. Later in the Murti Rahasya she is described as Maha Lakshmi with eighteen arms (Ashtadasa Bhuja Mahalakshmi) bearing weapons.

Caṇḍī or Caṇḍīika is the name by which the Supreme Goddess is referred to in Devi Mahatmya. According to Coburn, "Caṇḍīika is "the violent and impetuous one". In the light of the primacy of this designation of the goddess, it is striking that the word Caṇḍīka has virtually no earlier history in Sanskrit. There are no instances of its occurrence in the Vedic literature we have surveyed. The epics are similarly barren: neither the Ramayana nor the Mahabharata give evidence of the epithet, although in one of the hymns inserted in the latter Caṇḍa and Caṇḍī are applied to the deity they praised."[1]

The reason for the absence of the name Chandi in any ancient Sanskrit work is because of the deity belonging to the non-Sanskrit or non-brahminical tradition of Hinduism, and originates in Bengal as a non-aryan tribal deity, which is further explained below.

The designation of Chandi or Chandika is used twenty-nine times in the Devi Mahatmya, which is agreed by many scholars to have had originated in Bengal, the primary seat of the Shakta or Goddess tradition and tantric sadhana since ancient times. It is the most common epithet used for the Goddess. In Devi Mahatmya, Chandi, Chandika, Ambika and Durga have been used synonymously.[2]

Goddess Chandi is associated with the 9 lettered Navakshari Mantra.It is also called Navarna Mantra or Navavarna Mantra. It is one of the principal mantras in Shakti Worship apart from the Sri Vidhya Mantras. It customary to chant this mantra when chanting the Devi Mahatmya.

The origin of the Goddess is given in the second chapter of Devi Mahatmya.

"The great Goddess was born from the energies of the male divinities when the gods became impotent in the long-drawn-out battle with the asuras. All the energies of the Gods became united and became supernova, throwing out flames in all directions. Then that unique light, pervading the Three Worlds with its lustre, combined into one, and became a female form."

"The Devi projected an overwhelming omnipotence. The three eyed goddess was adorned with the crescent moon. Her multiple arms held auspicious weapons and emblems, jewels and ornaments, garments and utensils, garlands and rosaries of beads, all offered by the gods. With her golden body blazing with the splendour of a thousand suns, seated on her lion vehicle, Chandi is one of the most spectacular of all personifications of Cosmic energy." [3]

In other scriptures, Chandi is portrayed as "assisting" Kali in her battle with demon Raktabija. While Kali drank Raktabija's blood, which created new demons on falling on the ground; Chandi would desstroy the armies of demons created from his blood and finally killed Raktabija himself.[4] In Skanda Purana, this story is retold and another story of Chandika killing demons Chanda and Manda is added.[5]

Chandi Homa is one of the most popular Homas in Hindu religion. It is performed across India during various festivals, especially during the Navaratri. Chandi Homa is performed by reciting verses from the Durga Sapthasathi and offering oblations into the sacrificial fire. It could also be accompanied by the Navakshari Mantra. Kumari Puja, Suvasini Puja also form a part of the ritual. 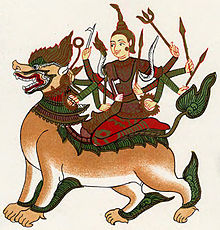 The dhyana sloka preceding the Middle episode of Devi Mahatmya the iconographic details are given. The Goddess is described as eighteen armed bearing string of beads, battle axe, mace, arrow, thunderbolt, lotus, bow, water-pot, cudgel, lance, sword, shield, conch, bell, wine-cup, trident, noose and the discus (sudarsana). She has a complexion of coral and is seated on a lotus.[6]

In some temples the images of Maha Kali, Maha Lakshmi, and Maha Saraswati are kept separately. The Goddess is also portrayed as four armed in many temples.

Temples devoted to Chandi are located in many places including the following: 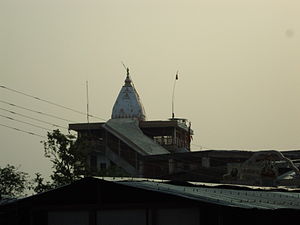 In folklore of Bengal

Chandi is one of the most popular folk deities in Bengal, and a number of poems and literary compositions in Bengali called Chandi Mangala Kavyas were written from 13th century to early 19th century. These had the effect of merging the local folk and tribal goddesses with mainstream Hinduism. The Mangal kavyas often associate Chandi with goddess Kali or Kalika.[8] and recognize her as a consort of Shiva and mother of Ganesha and Kartikeya, which are characteristics of goddesses like Parvati and Durga.[9] The concept of Chandi as the supreme Goddess also underwent a change. The worship of the goddess became heterogeneous in nature.

These are almost all village and tribal Goddesses with the name of the village or tribe being added on to the name Chandi. The most important of these Goddesses is Mangol Chandi who is worshipped in the entire state and also in Assam. Here the word "Mangol" means auspicious or benign.[11]