Mary Nisbet, Countess of Elgin (April 18, 1778, Dirleton - July 9, 1855) was the first wife of British diplomat Thomas Bruce, 7th Earl of Elgin during his term as Ambassador Extraodinare to the Ottoman Empire and one of the most influential and wealthiest heiresses of the late 18th and early 19th century. 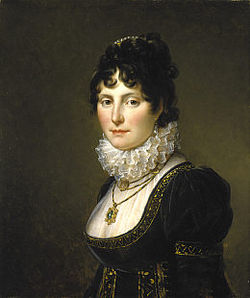 Mary Hamilton Nisbet was born April 18, 1778 to Scottish landowner William Nisbet of Dirleton and Mary Manners, the granddaughter of the 2nd Duke of Rutland. As the niece of the 3rd Duke of Rutland (who was one of the few individuals invited to witness the birth of the future George IV of the United Kingdom) and first cousin to the current 4th Duke of Rutland, Mary Manners travelled in the very highest of social circles. William Nisbet was a member of the small group of people who controlled the vasts amounts of land in Scotland. At her birth Mary Nisbet was one of the richest heiresses in the world, and according to Scottish Law all of her parents' property would pass to her as brotherless women were allowed to inherit. Mary was raised in the bucolic village of Dirleton about eighteen miles east of Edinburgh in the family home of Archerfield. Here Mary was raised simply; she played with her dogs, rode horses, and went swimming. Her education was intense, she studied ancient history, geography, literature and astronomy. Starting in the early 1790s she kept a detailed diary with her social life and observations on the left, and meticulous financial records (showing entries such as pennies donated to dancing dogs and purchases of flowers) on the right.

Starting in her early teens she traveled with her parents to London when Mr. Nisbet was in Parliament and began living the life of a very social lady of great status, long before her formal debut. At the house of her grandmother, Lady Robert Manners, she was introduced to some of the highest members of society, most of whom, conveniently enough, were her own relatives. This list included the Dukes and Duchesses of Montrose and Montague, and the Pelham family. She was noted to be very mature for her age and often joined her parents at gatherings traditionally held for grown-ups. Mary attended the Pantheon Opera House in Haymarket, Sadler's Wells Theatre, balls at Gloucester House (including one that lasted until 3 in the morning), and even Frogmore House, the favorite retreat of both Queen Victoria and Queen Charlotte. Raised in the limelight, she felt comfortable in the highest echelons of aristocracy and was at ease no matter how formal her surroundings. Her world was a constant whirlwind of parties, luncheons and balls. When in Scotland the flow of company was constant.

On December 8, 1798, Mary was formally introduced to Thomas Bruce, 7th Earl of Elgin at a tea. The Nisbet and Elgin families had been friends for years, furthermore the two were distantly related through the ancient Montagu line. Elgin's mother was the formidable Martha, Lady Elgin, the governess of Princess Charlotte, his ancestor was Robert the Bruce. Both families were understandably eager for the match, foreseeing the founding of a dynasty, a point that was not lost on Mary. She had always known that her marriage would have to be more than a love match, but Elgin was someone she had come to genuinely care for. While they were polar opposites in some respects, they also shared a great many interests including the occasional asthma attack. Elgin had only recently been appointed Ambassador to the Ottoman Empire. He was in need of a wife who could not only feel at ease on the international stage, but who could afford to support his ambitions since the majority of the expenses for the ambassador and his household were out-of-pocket, not covered by the government. He proposed sometime in 1798 and Mary became the Countess of Elgin on March 11, 1799. They spent their wedding night at Archerfield, then travelled to the Bruce ancestral home of Broomhall. After a week they returned to Archerfield, then left for London where Elgin gave his sister, Lady Charlotte, away in marriage.

After spending five months in London as the couple of the moment, Earl and Countess Elgin, along with their servants, set sail from Portsmouth on September 3, 1799 on the HMS Phaeton with only one minor complication: Mary was pregnant. It would have made sense for her to stay home until the birth of the child, but Mary was determined to follow her husband. The trip would take them over two months to complete, and on their way Mary and Elgin were treated as royalty. After docking in Lisbon (which Mary hated), they traveled on to Gibraltar where they were hosted by Charles O'Hara, and saluted by guns. They left Gibraltar on September 25 for Sicily by way of the Barbary Cost and arrived by the first of October. On the third they attended a party hosted by the infamous Horatio Nelson and his mistress Emma Hamilton and was introduced to Maria Carolina, Queen of Naples. Next came Palermo, Messina, and Tenodoes. Here they visited the ruins of ancient Troas. They entered the straits of Dardanelles and were introduced to Captain Pasha, the Sultan's cousin and the most powerful military man in the country. Mary was the first women to board the Pasha's ship and join the men. The Pasha delighted in showing off the opulence of his yacht, and must have been equally impressed by Mary, for he grew concerned that she would be chilled and insisted that she take a brightly colored shawl. And after over two months of discomfort, the Elgins arrived safely in Constantinople, where Mary was carried ashore in a gilded chair.

Mary and Elgin couldn't have picked a more controversial time to arrive in Constantinople. Suspicious of Western ways, the Ottomans conducted business in Italian. English was rarely used, and most English people were not trusted. Previously, the British Ambassadors had been forced to rent an embassy as there wasn't one built specifically for them. However shortly before the Elgin's arrival the French diplomats, thanks to Napoleon, had been evicted from their palace and sent to Yedikule prison, leaving the building open for the newest English ambassador and his wife. Although Elgin immediately began pressing for their release, the French choose to blame him personally for their imprisonment. From the moment she arrived Mary decided to play by her own rules. She immediately focused on what needed to be done, ordering new wallpaper and furnishing for the embassy, prepared apartments for her coming baby, and took over the management of her enormous household. Eleven days after their arrival Mary had already held a number of balls, dinners, and dances. On Tuesday, November 26 Mary became the first women to ever attend a political Ottoman ceremony. Elgin had contacted the Grand Vizier asking permission for Mary to attend, and apparently amused by the couple's antics, he consented. Five months pregnant, dressed as a man and with her maid in tow, Mary was presented to the Ottomans as Lord Bruce and allowed to watch her husband make his speech to the Grand Vizier.

Lord Elgin and Lady Mary had a son and three daughters:[1][2]

After her first marriage ended in divorce Mary later married Robert Ferguson of Raith (1777–1846) who had been cited in the divorce. They had no children.