The North Wind and the Sun

The North Wind and the Sun 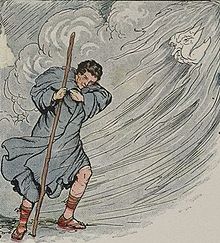 The wind attempts to strip the traveler of his cloak, illustrated by Milo Winter in a 1919 Aesop anthology. 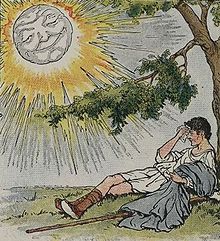 The sun strips the traveler of his cloak

The North Wind and the Sun is one of Aesop's Fables (Perry Index 46). It is type 298 (Wind and Sun) in the Aarne-Thompson folktale classification.[1]

The story and its application

The story concerns a competition between the North wind and the Sun to decide which is the stronger of the two. The challenge was to make a passing traveler remove his cloak. However hard the North Wind blew, the traveler only wrapped his cloak tighter, but when the Sun shone, the traveler was overcome with heat and had to take his cloak off.

The fable was well known in Ancient Greece and was alluded to in an anecdote concerning the dramatist Sophocles. After persuading a lad to have sex with him,

'This boy laid his own cloak on the ground under them, and they wrapped themselves in Sophocles’ cape. After the act the boy snatched Sophocles’ cape and went off leaving Sophocles his own boyish cloak. The incident was widely reported. Euripides heard of it and made a joke out of it, saying that he had had that boy too and it did not cost him anything; Sophocles had let himself go and had paid with ridicule. When Sophocles heard that, he composed an epigram against Euripides in the following sense, alluding to the story of the North Wind and the Sun, and at the same time satirising Euripides’ adulteries:

It was the Sun, and not a boy, whose heat stripped me naked;
As for you, Euripides, when you were kissing someone else’s wife
The North Wind screwed you. You are unwise, you who sow
In another’s field, to accuse Eros of being a snatch-thief.'[2]

The Latin version of the fable first appears centuries later in Avianus as De Vento et Sole (Of the wind and the sun, Fable 4);[3] early versions in English and Johann Gottfried Herder's poetic version in German also give it as such. It is only in mid-Victorian times that the title "The North Wind and the Sun" begins to be used. In fact the Avianus poem refers to the characters as Boreas and Phoebus, the gods of the north wind and the sun, and it is under the title Phébus et Borée that Jean de la Fontaine wrote his version of the fable (VI.3).

Victorian versions give the moral as 'Persuasion is better than force', but it has been put in different ways at other times. In the Barlow edition of 1667, Aphra Behn teaches the Stoic lesson that there should be moderation in everything: 'In every passion moderation choose,/For all extremes do bad effects produce,'[4] while La Fontaine's conclusion is that 'Gentleness does more than violence' (Fables VI.3). In the 18th century, Herder comes to the theological conclusion that 'Superior force leaves us cold,/Warm Christian love dispels that' (Gedichte V.4).[5] and the Walter Crane limerick edition of 1887 gives a psychological interpretation, 'True strength is not bluster'. Most of these examples draw a moral lesson, but La Fontaine hints also at the political application that is present also in Avianus' conclusion: 'They cannot win who start with threats'. There is evidence that this reading has had an explicit influence on the diplomacy of modern times: in South Korea's Sunshine Policy, for instance, or Japanese relations with the military regime in Burma.[6]

The fable in the arts

Jean Restout made a painting of La Fontaine's fable for the Hôtel de Soubise in 1738. This shows a traveller on horseback among mountains under a stormy sky.[7] In his print of the same subject, Jean-Baptiste Oudry reverses the perspective to show the god of the north wind riding a cloud chariot with the horseback traveller merely a small figure below.[8] In modern times the fable has been used as a theme for a stained glass window in the U.S.A.[9] and as part of a 1987 set of Greek stamps.[10]

In 2008 the composer Bob Chilcott did a setting as one of the five pieces in his “Aesop’s Fables” for piano and choir.[11]

Use in phonetic demonstrations

The fable has also been proposed as a parallel text in comparative linguistics as it provides more natural language than the Lord's Prayer. In addition, impromptu tellings can indicate differences within languages such as dialects or national varieties.[13] The example above, for instance, has 'shined' where British English usage would be shone.