Tombs of the Nobles (Amarna)

Tombs of the Nobles (Amarna)

Located in Middle Egypt, the Tombs of the Nobles at Amarna are the burial places of some of the powerful courtiers and persons of the city of Akhetaten.

The tombs are in 2 groups, cut into the cliffs and bluffs in the east of the dry bay of Akhetaten. There are 25 major tombs, many of them decorated and with their owners name, some are small and unfinished, others modest and unassuming. Each seems to reflect the personality and patronage of the tomb's original owner. 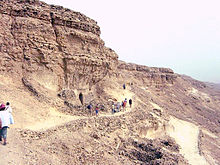 Northern Tombs at Amarna, looking south along the cliffs

These tombs are located in 2 groups in the cliffs overlooking the city of Akhetaten, to the north and east of the city. They are split into to 2 groups by a Wadi, and are near to one of the Boundary Stelae (Stelae V).

A short distance to the west and north of the Northern Tombs lie the remains of three large mud-brick solar altars in the form of platforms with ramps. The reason for their location is not clear. Their connection with an ancient road leading to the Northern Tombs would seem to be a sign that they were for the benefit of those buried in them.

The southern tombs are located in a series of low bluffs south and east of the main city. Associated with these tombs a recently discovered workers cemetery has been found. [3]

Some the tombs have obviously been open since antiquity, and have been used variously as burial places in the Ptolemaic times, store houses, houses and as coptic churches.