The Gaillard Cut, or Culebra Cut, is an artificial valley that cuts through the continental divide in Panama. The cut forms part of the Panama Canal, linking Lake Gatún, and thereby the Atlantic Ocean, to the Gulf of Panama and hence the Pacific Ocean. It is 12.6 km (7.8 mi) from the Pedro Miguel lock on the Pacific side to the Chagres River arm of Lake Gatun, with a water level 26 m (85 ft) above sea level.

Construction of the cut was one of the great engineering feats of its time; the immense effort required to complete it was justified by the great significance of the canal to shipping, and in particular the strategic interests of the United States of America.

As described in History of the Panama Canal, the excavation of the Culebra Cut was begun by a French venture, led by Ferdinand de Lesseps, which was attempting to build a sea-level canal between the oceans, with a bottom width of 22 metres (72 ft). Digging at Culebra began on January 22, 1881. A combination of disease, underestimation of the problem, and financial difficulties led to the collapse of the French effort, which was bought out by the United States in 1904. The French had excavated some 14,256,000 m³ (18,646,000 cubic yards) of material from the cut,[1] and had lowered the summit from 64 metres (210 ft) above sea level[2] to 59 metres (193 ft),[3] over a relatively narrow width. 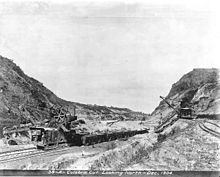 The Culebra Cut in December, 1904, after the French handover

The United States took over on May 4, 1904. Under the leadership of John F. Stevens, and later George Washington Goethals, the American effort started work on a wider, but not as deep a cut, as part of a new plan for an elevated lock-based canal, with a bottom width of 91 metres (300 ft); this would require creation of a valley up to 540 metres (a third of a mile) wide at the top. A vast amount of new earthmoving equipment was imported, and a comprehensive system of railways was constructed for the removal of the immense amounts of earthen and rocky spoil.

Major David du Bose Gaillard, of the U.S. Army Corps of Engineers, joined the project at the same time as Goethals, and he was put in charge of the central district of the canal, which was responsible for all of the work between Gatun Lake and the Pedro Miguel locks — most notably, the Culebra Cut. Gaillard brought dedication and quiet, clear-sighted leadership to his difficult, complex task.

The scale of the work was massive. Hundreds of large steam drills bored holes in which were planted tons of dynamite, which blasted the rock of the cut so that it could be excavated by steam shovels. Dozens of spoils trains took the spoil from the shovels to the landfill dumps, about twelve miles (19 km) away. In a typical day, 160 trainloads of material were hauled away from a cut nine miles long (14 km). This workload on the railroads required some skillful co-ordination. At the busiest times, there was a train going inbound or outbound almost every minute.

Six thousand men worked in the cut, drilling holes, placing explosives, controlling steam shovels, and running the dirt trains. They also moved and extended the railroad tracks as the work moved forward. Twice a day work stopped for blasting, and then the steam shovels were moved in to take the loose spoil (dirt and rock) away. More than 600 holes filled with dynamite were fired daily. In all, 60 million pounds (27,000 tonnes) of dynamite were used. In some locations, about 52,000 pounds (23.6 metric tonnes) of dynamite were planted and detonated for a single blast. 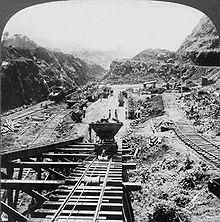 Construction under way in the Culebra Cut, in 1907

The excavation of the cut was one of the greatest areas of uncertainty in the creation of the canal, due to the unpredicted large landslides. The International Board of Consulting Engineers had mistakenly decided that the rock would be stable at a height of 73.5 metres with a slope of 1 in 1.5; in practice, the rock began to collapse from that slope at a height of only 19.5 metres. The misjudgment was in part due to unforeseen oxidation of the underlying iron strata due to water infiltration, which caused weakening and eventually a collapse of the strata.

The first and largest major slide occurred in 1907 at Cucaracha. The initial crack was first noted on October 4, 1907, followed by the mass wasting of about 382,000 m³ (500,000 cubic yards) of clay. This slide caused many people to suggest the construction of the Panama Canal would be impossible; Gaillard described the slides as tropical glaciers, made of mud instead of ice. The clay was too soft to be excavated by the steam shovels, and it was therefore largely removed by sluicing it with water from a high level.

After this, the sediment in the upper levels of the cut was removed, resulting in less weight over the weak strata. The slide still continued to cause minor problems after this.

Gaillard died from a brain tumor in Baltimore, Maryland, on December 5, 1913, having been promoted to colonel just one month prior, and hence he never saw the opening of the canal in 1914. The Culebra Cut, as it was originally known, was renamed to the Gaillard Cut on April 27, 1915, in his honor.[4][5]