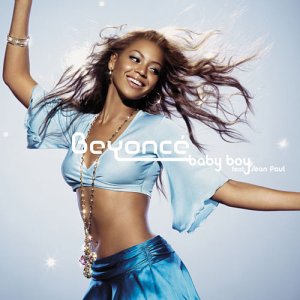 "Baby Boy" is a – song by American singer . It features a toast by n artist . The track was produced by and Knowles for her debut solo album "". It was written by Knowles, Storch, Robert Waller, and Sean Paul; its lyrics refer to a woman's fantasies, and its music video features sensual footage.

"Baby Boy" was released on October 14, 2003 in the United States as the second single from the album. The single was a commercial success, and topped the US Singles Chart for nine consecutive weeks, in part due to the received on radio. It was certified platinum in the US, and was Knowles' longest-running solo number-one single until the release of "" in 2007. "Baby Boy" performed well internationally, reaching the top ten in many countries, and achieving platinum status in Australia. The song has been praised by both critics and music industry personnel. "Baby Boy" remains a staple of Knowles' concert set list. The recognized it at the 2005 Pop Music Awards as one of the most performed songs of the year.

In 2005, US singer-songwriter Jennifer Armour filed a lawsuit claiming that Knowles had used lyrics and a musical hook from her song "Got a Little Bit of Love for You". The case was dismissed the following year.

Knowles went to in the United States to work with Canadian record producer for her debut solo album, "".

Once the track was supposedly done, Knowles had the idea that it would be "perfect" if n dancehall- artist contributed a vocal track. Knowles contacted Sean Paul about a possible collaboration.

"Baby Boy" is a mid-tempo song performed with a moderate groove. It is in the key of E♭ major, and is set to ninety-two in .

"Baby Boy" is a sequel in ways to ""; a 2002 Jay-Z song featuring Knowles. The lyrics detail a woman's fantasies, and in keeping with the album's overall theme, Knowles' deemed them as personal to her. Sean Paul remarked, "She's telling me about her fantasies and picturing me and her going here and there, all over the world ... I'm answering back, like, 'I'm wit it.'" The lyrics are constructed in the toast–chorus–verse form; Sean Paul performs the while Knowles sings all other verses and choruses. The pattern is repeated twice; a further chorus and verse follow, resolving at the toasting and final verse.

"Baby Boy" was released as the second single from the album "". It was released as a CD in Canada on May 4, 2003, in Australia on September 9, and in the United States on October 14, 2003 as a 12" single. [Cite web |title=Beyoncé: Discography |url=http://www.billboard.com/bbcom/discography/more.jsp?tp=singles&pid=317670&aid=1089064#artAlbumMoreContainer |work=Billboard |publisher=Nielsen Business Media, Inc |accessdate=2008-04-11] The track appeared in the revamped version of Sean Paul's 2003 second album, "".

James Anthony of the British newspaper "" said the track "bridges the gap between the genres of R&B and dancehall". [Cite web |last=Anthony |first=James |title='Of course you can lose yourself' |url=http://arts.guardian.co.uk/filmandmusic/story/0,,1852025,00.html |work=The Guardian |date=2006-08-18 |accessdate=2008-04-01] British record label was honored by the American Society of Composers, Authors and Publishers (ASCAP) during the 2005 Pop Music Awards as Publisher of the Year for publishing "Baby Boy", among other songs.

Scenes featuring Knowles and Sean Paul are shown separately. The video begins with Sean Paul sitting on a throne while ; Knowles is leaning against the wall dancing. In the following scene, Knowles is seen on a bed tossing herself. Sean Paul is shown with several women who are lying on the floor caressing each other. Knowles walks towards the beach; she spots a man, and the two touch and flirt. At a party, Knowles dances with a man. Water floods the floor as she sings "the dance floor becomes the sea". The original track is interpolated towards the end with an Arabic instrumental, designed for the music video. This section showcases Knowles vigorously dancing on the sand.

Internationally, "Baby Boy" performed just as well, peaking inside the top ten on most charts. The single debuted at number two in the United Kingdom, becoming the chart's highest debut and "Baby Boy"'s highest entry internationally. [Cite web |title=UK Singles Top 75 |url=http://acharts.us/uk_singles_top_75/2003/42 |work=aCharts |accessdate=2008-01-23] Though it spent eleven weeks on the chart, it failed to top it. In most European countries, the single entered the top ten. In Australia and New Zealand, "Baby Boy" peaked at number three and two, respectively. It was certified platinum by the with sales in excess of 70,000 units. [Cite web |title=ARIA Charts - Accreditations - 2003 Singles |url=http://www.aria.com.au/pages/aria-charts-accreditations-singles-2003.htm |work=Australian Recording Industry Association |accessdate=2008-01-23]

"Baby Boy" has been included on the set list for most of Knowles' concert tours. The song was set as opening of her that began in late 2003. During the tour, she appeared suspended from the ceiling of the arena being lowered to a red lounger [Cite web |last=Simpson |first=Dave |title=Beyoncé |url=http://arts.guardian.co.uk/reviews/story/0,,1077421,00.html |work=The Guardian |date=2003-11-04 |accessdate=2008-04-16] —a prop she also used during the 2003 MTV VMA. The footage taken in 's in the United Kingdom is included in the "Live at Wembley" concert DVD that was released on April 27, 2004. Knowles performed the song midway through the setlist of her former group farewell tour , and it subsequently appeared on the "" concert DVD. During the 2007 world concert tour, Knowles again performed "Baby Boy" in a version that incorporated a reggae song "Murder She Wrote". [Cite news |last=Shaheem |first=Reid |title=Beyonce Puts On Flawless — And Fall-Less — NYC Show With Robin Thicke |url=http://www.mtv.com/news/articles/1566431/20070806/knowles_beyonce.jhtml |work=MTV News |date=2007-10-06 |accessdate=2008-01-22] The footage taken at the in Los Angeles on September 2, 2007 appeared on "" DVD.

In the 2005 ASCAP Pop Music Awards, "Baby Boy", along with Knowles' songs "Me, Myself and I" and "Naughty Girl", was honored as one of the most performed songs of the year. [Cite web |title=Most Performed Songs |url=http://www.ascap.com/eventsawards/awards/popawards/2005/winners.html |work=American Society of Composers, Authors, and Publishers |accessdate=2008-01-23]

In 2005, US singer-songwriter Jennifer Armour filed a lawsuit claiming that Knowles had used some lyrics and the musical hook from her song "Got a Little Bit of Love for You".

On appeal, the affirmed the district court's ruling, but ruled with different reasoning. It held that there was no infringement because Armour's demo tape was received after the writing of Knowles' song had been substantially completed. However, the court did not address the issue of substantial similarity. [ [http://www.ca5.uscourts.gov/opinions%5Cpub%5C06/06-20934-CV0.wpd.pdf "Armour v. Knowles"] (PDF), 512 F.3d 147 (5th Cir. 2007). Retrieved on -.]