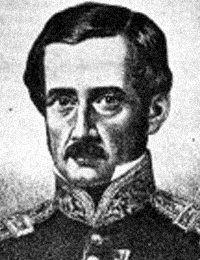 Gana was born in Santiago, the son of Agustín Gana Darrigrandi and of Dolores López Guerrero. He entered military service in 1806 as a cadet, and in 1808 was promoted to 2nd lieutenant of the king's regiment, in which he served during the apprehension of an English invasion in 1809. In 1812 he quit the Spanish Army when his father was arrested and sent as a prisoner to for participating in the preparations for the . He decided to accompany his father to prison in , and while there he joined a prisoner's revolt, was captured and tortured.

In 1820 Gana entered the service again in , under the orders of General . Gana with his battalion captured the City of with the whole garrison, and, as a consequence, the provinces of , , and pronounced for the insurrection, leading to the whole northern portion of Peru being wrestled from the rule of the viceroy. The viceroy, José de La Serna, was forced to evacuate his capital, , on July 6th, and on the 12th San Martin occupied the City. Independence was solemnly proclaimed on July 28th.

Meanwhile Gana took part in the assault of , on August 14th, and after the final surrender of September 21st, he was promoted to major. Gana participated in General Sucre's expedition to the south, and commanded a column that attacked the Spanish forces at (August 14, 1823), and, notwithstanding the loss of one third of his troops, routed the enemy and pursued him toward .

In October of 1823, Gana returned to Chile, and in 1825 was sent with his battalion under Colonel Sanchez to garrison the city of Talca against the attacks of the bands of the Pincheira brothers, whom he surprised and defeated. In December of the same year he was promoted to colonel, and his battalion formed part of General 's expedition to , which archipelago was still held by the Spanish under General . He participated in the decisive (January 14th, 1826), and was commissioned by Freire to sign the capitulation of Pudeto on January 19th which surrendered the rest of Chilean territory to the independentist forces. During the , he joined the liberal forces under General , and, after their defeat at the (April 17th, 1830) declined to serve under the government of the conservatives, and retired from active service.

In 1842, Gana was called into service again by the government of General , and appointed director of the military Academy. Twice he was elected Deputy for "Talca" in congress, and in 1849 Gana was appointed intendant of the province of . In September 1851, President named him Minister of War and Navy, and in 1853 Gana was appointed president of the military court of appeals, being promoted in 1854 to brigadier-general. At the same time he became dean of the philological faculty of the , a literary honor which no other Chilean general has ever attained. In 1856 he was sent as minister (ambassador) to , and on his return in 1857 again took charge of the Ministry of War and Navy. In 1858 he was sent on a special mission to Spain. In 1860 he was elected senator of the republic, and in 1861 appointed counsellor of state. Gana died in his country estate in Nuñoa, in 1864.