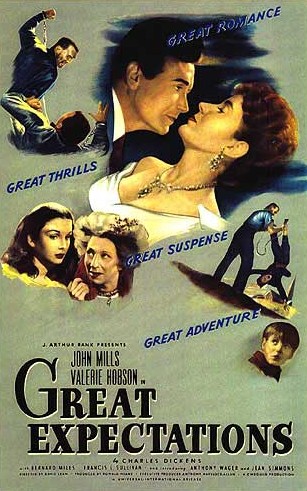 "Great Expectations" is a 1946 directed by and based on the novel by . It stars , , , , and . It was the first of two films Lean directed based on Dickens' novels, the other being his adaptation of "Oliver Twist".

The script was written by , , , and , and the film was produced by Ronald Neame and photographed by Guy Green.

An orphan, Phillip "Pip" Pirrip (), lives with his shrewish older sister () and her kindhearted blacksmith husband, Joe Gargery (). One day, Pip runs into an escaped convict, Abel Magwitch (). Magwitch intimidates the boy into getting him some food and a file for his chains. However, the man is caught when he attacks another escapee he hates and taken back to prison.

Later, Miss Havisham (), a rich, very odd spinster, arranges to have the boy come to her mansion regularly, to provide her company and to play with a cruel but beautiful teenage girl, Estella (), who mocks his coarse manners at every opportunity. Pip quickly falls in love with her. Once, he meets one of Miss Havisham's relations, Herbert Pocket (), a boy about his age. Pip also bumps into Mr. Jaggers (), Miss Havisham's lawyer. The visits come to an end when Pip turns 14 and begins his apprenticeship as a blacksmith. Estella is leaving also, to learn to become a lady.

Six years later, Mr. Jaggers shows up and tells him that a mysterious benefactor has offered to turn Pip (played as an adult by ) into a gentleman, one with "great expectations". Pip naturally assumes that it is Miss Havisham. He is taken to London where Mr. Jaggers arranges for Pip to stay with a grownup Herbert Pocket (), who will teach him how to behave like a gentleman. From Herbert, Pip learns that Miss Havisham is embittered and her mind warped at being left at the altar many years ago; she is determined to gain revenge against all men. Estella is her instrument of vengeance, a heartless creation to break men's hearts. Pip refuses to believe it.

After Pip turns 21, a visit from Joe Gargery proves only that Pip has learned to become a snob, as evidenced by his ill-concealed irritation at Joe's clumsy manners. Joe brings a request from Miss Havisham to see her. There he is delighted to be reunited with Estella (played now by ), though she warns him point-blank, "You must know, Pip, I have no heart," but Pip doesn't take it to heart. She is about to enter London society. Estella and Pip spend much time together, though she flirts with many men, especially the unpopular, though wealthy and well-born Bentley Drummle (), much to Pip's disgust.

Pip receives another visitor from the past. Magwitch appears and tells Pip that he is his patron, not Miss Havisham. Mr. Jaggers confirms the news, if indirectly, inasmuch as Magwitch has apparently been transported to Australia (where he made the fortune that has paid for Pip's refinement) and will be hanged if found in England. When Jagger's assistant, Mr. Wemmick (), warns Pip that an old enemy (the other escapee at the beginning of the film) knows that Magwitch is in London, Pip makes preparations to smuggle the old man onto a and accompany him to the Continent.

He goes to bid farewell to Estella and finds her with Miss Havisham. When pressed, she tells Pip that she is going to marry (and torment) Drummle. Pip affirms to Miss Havisham that she has gotten her revenge, at least on him; he loves Estella without hope. For the first time, Miss Havisham regrets her actions. After he leaves, a piece of coal dislodged from the fireplace sets her dress (her wedding dress) on fire. Pip hears her screams, but comes to her aid too late.

When Pip, Herbert and Magwitch row out to the packet boat, they are intercepted by the waiting police, tipped off by Magwitch's great enemy. Magwitch grapples with his nemesis, who is killed when he is struck by the vessel. Magwitch is seriously injured. The old man had previously spoken to Pip of his lost daughter. Pip's suspicions are aroused and then confirmed by Mr. Jaggers: she is Estella. Pip visits the dying Magwitch and tells him of her fate, and that he, Pip, is in love with her. Magwitch passes away, a contented man.

Stricken by illness and with his expectations gone, Pip is taken home and nursed back to health by Joe Gargery. When he recovers, he revisits Miss Havisham's deserted house. There he finds Estella. (When Mr. Jaggers told Drummle of her true parentage, he broken off the engagement and she returned to the house she had inherited from Miss Havisham.) Learning that Estella plans to live in seclusion just like her mentor, the alarmed Pip tears down the curtains and forces open the boarded-up windows; for the first time in years, sunlight blazes into the room, revealing the crumbling wedding cake surrounded by cobwebs and dust. Pip forces Estella to look, and tells her that he has never stopped loving her. After hesitating, she embraces him and they leave the house, taking one last look back when they reach the gate.

The happy ending differs greatly from both the published and unpublished conclusions to Dickens' novel.