A magnetic stirrer or magnetic mixer is a laboratory device that employs a rotating magnetic field to cause a stir bar (also called "flea") immersed in a liquid to spin very quickly, thus stirring it. The rotating field may be created either by a rotating magnet or a set of stationary electromagnets, placed beneath the vessel with the liquid. Magnetic stirrers often include a hot plate or some other means for heating the liquid.

Magnetic stirrers are often used in chemistry and biology. They are preferred over gear-driven motorized stirrers because they are quieter, more efficient, and have no moving external parts to break or wear out (other than the simple bar magnet itself). Due to its small size, a stirring bar is more easily cleaned and sterilized than other stirring devices. They do not require lubricants which could contaminate the reaction vessel and the product. They can be used inside hermetically closed vessels or systems, without the need for complicated rotary seals.

On the other hand, the limited size of the bar means that magnetic stirrers can only be used for relatively small (under 4 liters) experiments. They also have difficulty dealing with viscous liquids or thick suspensions. 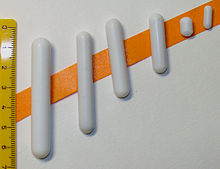 Arthur Rosinger of Newark, New Jersey, U.S.A. obtained US Patent 2,350,534, titled Magnetic Stirrer on 6 June 1944, having filed an application therefor on 5 October 1942.[1] Mr. Rosinger's patent includes a description of a coated bar magnet placed in a vessel, which is driven by a rotating magnet in a base below the vessel. Mr. Rosinger also explains in his patent that coating the magnet in plastic or covering it with glass or porcelain makes it chemically inert.

The plastic-coated bar magnet was independently invented in the late 1940s by Edward McLaughlin, of the Torpedo Experimental Establishment (TEE), Greenock, Scotland, who named it the 'flea' because of the way it jumps about if the rotating magnet is driven too fast.

An even earlier patent for a magnetic mixer is US 1,242,493, issued 9 October 1917 to Richard H. Stringham of Bountiful, Utah, U.S.A. Mr. Stringman's mixer used stationary electromagnets in the base, rather than a rotating permanent magnet, to rotate the stirrer.

The first multipoint magnetic stirrer was developed and patented by Salvador Bonet of SBS Company in 1977. He also introduced the practice of noting the denomination of stirring power in "liters of water", which is a market standard today.

Heating elements may range from 120 W or lower to 500 W or more. The maximum reachable fluid temperature depends on the size of the flask, the quantity of solution to be heated, and the power of the heating element.