The Mealy Amazon or Mealy Parrot (Amazona farinosa) is among the largest parrots in the Amazona genus, the Amazon parrots. It is a mainly green parrot with a total length of 38–41 cm (15–16 in). It is endemic to tropical Central and South America.

The Mealy Amazon occurs in tropical Central America and South America. It frequents humid to semi-humid forest (only rarely in deciduous forest) and plantations. In regions dominated by open/dry habitats it is restricted to gallery forest or completely absent.

Several subspecies have been described and these have alternative common names that are used frequently in aviculture: 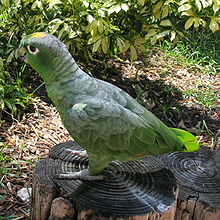 Note the characteristic mealy ("flour") texture over the back and nape of neck. 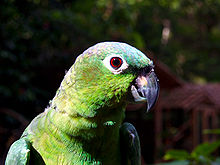 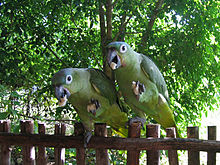 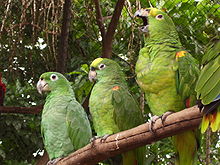 The Mealy Amazon is mainly green. The back and nape often have a whitish tinge; almost as if it had been covered in a thin layer of flour ("meal"; hence its name). The distal half of the tail is paler and more yellow than the basal half, thus resulting in a distinctly bi-coloured look. In flight it shows a bluish-black trailing edge to the wing and a conspicuous red speculum. Occasionally a few yellow feathers are apparent on the top of the head and two subspecies, virenticeps and guatemalae, have a bluish-tinged crown. The maroon to orange eyes (typically appear dark from a distance) are surrounded by a relatively broad white eye-ring of bare skin.

In South America, it is commonly confused with the Yellow-crowned Amazon, but can be recognized by its larger size, less yellow to the crown (not entirely reliable, as some Yellow-crowned may show almost none), the whitish tinge to its plumage, broader white eye-ring, and red of the leading edge of the wing placed near the phalanx (not near the radiale), but this is often difficult to see (especially on perched birds). Their voices are also strikingly different.

The Mealy Amazon is social and can be found in pairs or in large flocks. They are even known to interact with other parrots, such as macaws. They are usually quiet but can be loud at dusk and dawn. In captivity, they are known as one of the gentlest and calmest of all amazons.

After Mealy Amazons reach sexual maturity they usually form monogamous relationships with a single partner. Each year courtship usually begins in early spring, and the female will usually lay three or four white eggs in tree-cavity nest. The female incubates the eggs for about 26 days. The male regurgitates food for the female during the incubation period, and later for the chicks in the nest as well. The chicks leave the nest about 60 days after hatching.[3]

It is fairly common in most of its range, but has declined locally due to habitat loss and trapping for wild parrot trade. Trafficking of the birds (as for exotic pets) is illegal in many nations, but the species are still smuggled into the United States from Mexico. In some areas Mealy Amazons are hunted as food. The Mealy Amazon sometimes feeds on human crops (especially corn) and may be considered a crop pest.

The Mealy Amazon is bred in captivity with some regularity.