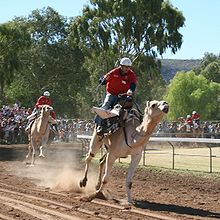 Camel racing during the 2009 Camel Cup held in Alice Springs.

Camel racing is a popular sport in India, Pakistan, Saudi Arabia, Egypt, Bahrain, Jordan, Qatar, United Arab Emirates, Oman, Australia, and Mongolia. Professional camel racing, like horse racing, is an event for betting and tourist attraction. Camels can run at speeds up to 65 km/h (18 m/s; 40 mph) in short sprints and they can maintain a speed of 40km/h (11 m/s; 25 mph) for an hour.[citation needed]

Camels are often controlled by child jockeys, but allegations of human rights abuses have led to nationwide bans on underage labor in the UAE and Qatar.

A major camel race in Australia is the Camel Cup held at Alice Springs. It is held annually and includes not only the camel races themselves, but also a collection of market stalls and other entertainment.

Children are often favored as jockeys because of their light weight. It has been reported that thousands of children (some reported as young as 2 years old) are trafficked from countries such as Bangladesh, Pakistan, and Sudan for use as jockeys in the Persian Gulf States' camel racing industry. [1] Estimates range of 5,000 – 40,000 child camel jockeys in the Persian Gulf. [2][3]

Many child camel jockeys are seriously injured by falling off the camels.[4] The child jockeys live in camps (called "ousbah") near the racetracks and many are victims of abuse.[2] Hundreds of children have been rescued from camel farms in Oman, Qatar, and UAE and taken back to their original homes or kept in shelter homes.[5] Many however, are unable to identify their parents or home communities in South Asia or Sudan. Some countries have issued penalties for those who trafficked child camel jockeys and ordered the owners responsibilities for returning the children back to their home countries. However, they report that in many instances the children rescued were those who had been sold away by their own parents in exchange for money or a job abroad. If they were returned, the children would again be sold for the same purposes. Other children did not speak their native languages, or did not know how to live outside the camel farms.

A prominent activist for rehabilitation and recovery of the jockeys is Pakistani lawyer Ansar Burney. He has focused a portion of his work on eliminating the use of child jockeys.

Banning the use of child jockeys

The United Arab Emirates was the first to ban the use of children under 15 as jockeys in the popular local sport of camel racing when Sheikh Hamdan bin Zayed Al Nahyan announced the ban on July 29, 2002.[6] The UAE issues penalties such as jail and banning for those found using children as jockeys.

In Qatar, the Emir of Qatar, Hamad Bin Khalifa Al-Thani, banned child jockeys in 2005[7] and directed that, by 2007, all camel races would be directed by robotic jockeys.[8]