Second Battle of the Marne

Second Battle of the Marne

The Second Battle of the Marne (French: Seconde Bataille de la Marne), or Battle of Reims (15 July-6 August 1918) was the last major German Spring Offensive on the Western Front during the First World War. The German attack failed when an Allied counterattack led by France overwhelmed the Germans, inflicting severe casualties. It was the turning point of the war in the western front.

Following the failures of the Spring Offensive to end the conflict, Erich Ludendorff, Chief Quartermaster-General and virtual military ruler of Germany, believed that an attack through Flanders would give Germany a decisive victory over the British Expeditionary Force (BEF), the most experienced Allied force on the Western Front at that time. To shield his intentions and draw Allied troops away from Belgium, Ludendorff planned for a large diversionary attack along the Marne.

The battle began on 15 July, when 23 German divisions of the First and Third armies—led by Bruno von Mudra and Karl von Einem—assaulted the French Fourth Army under Henri Gouraud east of Reims (the Fourth Battle of Champagne (French: 4e Bataille de Champagne)). The U.S. 42nd Division was attached to the French Fourth Army and commanded by Gouraud at the time. Meanwhile, 17 divisions of the German Seventh Army, under Max von Boehn, aided by the Ninth Army under Eben, attacked the French Sixth Army led by Jean Degoutte to the west of Reims (the Battle of the Mountain of Reims (French: Bataille de la Montagne de Reims)). Ludendorff hoped to split the French in two. 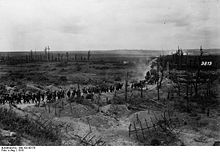 The German attack on the east of Reims was stopped on the first day, but west of Reims the offensive fared better. The defenders of the south bank of the Marne could not escape the three-hour fury of the German guns. Under cover of gunfire, stormtroopers swarmed across the river in every sort of transport—30-man canvas boats or rafts. They began to erect skeleton bridges at 12 points under fire from those Allied survivors who had not been suppressed by gas or artillery fire. Some Allied units, particularly the 3rd U.S. Infantry Division "Rock of the Marne", held fast or even counterattacked, but by the evening, the Germans had captured a bridgehead either side of Dormans 4 mi (6.4 km) deep and 9 mi (14 km) wide, despite the intervention of 225 French bombers, which dropped 44 short tons (40 t) of bombs on the makeshift bridges.

The British XXII Corps and 85,000 American troops joined the French for the battle, and stalled the advance on 17 July. 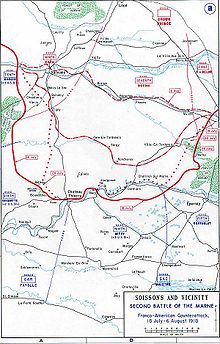 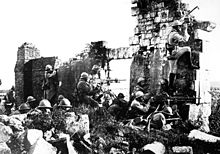 French troopers under General Gouraud, with their machine guns amongst the ruins of a cathedral near the Marne, driving back the Germans. 1918

The German failure to break through, or to destroy the Allied armies in the field, allowed Ferdinand Foch, the Allied Supreme Commander, to proceed with the planned major counteroffensive on 18 July; 24 French divisions, including the Buffalo Soldiers of the 92nd Infantry Division (United States) and 93rd Infantry Division (United States) under French command, joined by other Allied troops including eight large U.S. divisions under U.S. command and 350 tanks attacked the recently formed German salient.

By May, Foch had spotted flaws in the German offensives.[2] The force which defeated the German offensive was combined of Americans, French, British and Italians. Co-ordinating this counter-attack would be a major problem as Foch had to work with “four national commanders but without any real authority to issue order under his own name[...]they would have to fight as a combined force and to overcome the major problems of different languages, cultures, doctrines and fighting styles.[3]” However, the presence of fresh American troops, unbroken by years of war, significantly bolstered Allied resistance to the German offensive. Floyd Gibbons wrote about the American troops, saying, "I never saw men charge to their death with finer spirit."[4]

On 19 July, the Italian Corps lost 9,334 officers and men out of a total fighting strength of about 24,000. Nevertheless, Berthelot rushed two newly-arrived British infantry divisions, the 51st (Highland) and 62nd (West Riding),[5] through the Italians straight into attack down the Ardre Valley (the Battle of Tardenois (French: Bataille du Tardenois)—named after the surrounding Tardenois plain).

The Germans ordered a retreat on 20 July and were forced back to the positions from which they had started their Spring Offensives. They strengthened their flank positions opposite the Allied pincers and on the 22nd, Ludendorff ordered to take up a line from the upper Ourcq to Marfaux.

Costly Allied assaults continued for minimal gains. By 27 July, the Germans had withdrawn their center behind Fère-en-Tardenois and had completed an alternative rail link. The Germans retained Soissons in the west.

On 1 August, French and British divisions of Mangin's Tenth Army renewed the attack, advancing to a depth of nearly 5 mi (8.0 km). The Allied counterattack petered out on 6 August in the face of German offences. By this stage, the salient had been reduced and the Germans had been forced back to a line running along the Aisne and Vesle Rivers; the front had been shortened by 28 mi (45 km).

The Second Battle of the Marne was an important victory, Ferdinand Foch received the baton of a Marshal of France. The Allies had taken 29,367 prisoners, 793 guns and 3,000 machine guns and inflicted 168,000 casualties on the Germans. The primary importance of the battle was its moral aspect: the decision gained on the Marne marked the end of a string of German victories and the beginning of a series of Allied victories that were in three months to bring the German Army to its knees.