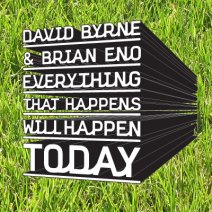 Listen
filename=David Byrne and Brian Eno - Strange Overtones.ogg
title="Strange Overtones"
description=The final chorus of "Strange Overtones" discusses the themes of humanity and technology, illustrating the "electronic Gospel" genre of the album with the lyrics:
"Strange overtones in the music you are playing
We're not alone; it is strong and you are tough
But a heart is not enough."
format=

"Strange Overtones" is a 2008 song by and from their album "". In September 2008, created a music video for the track featuring the paintings of Brian Eno.

The first single off the album, the song was released on , as a DRM-free s digital download only available through the album's website at no cost. This song, like the rest of the album, will be available free for streaming and for purchase as a download.

While discussing the 2006 remix of "My Life in the Bush of Ghosts" at a dinner party, Eno suggested finishing some songs that he had written but that did not have lyrics. Byrne visited Eno's studio to listen to the demos and the two decided to collaborate to finish writing the songs.

Eno has also said the album is about "paint [ing] a picture of the human trying to survive in an increasingly digital world;" themes that are explored in this song. One subject of the song struggles to write innovative music, but is overheard by a neighbor using beats that are "twenty years old." The track has been described as "a song about writing a song."

Eno also considers the album " [S] omething that combines something very human and fallible and personal, with something very electronic and mathematical sometimes." And they tried to "make that picture of the human still trying to survive in an increasingly complicated digital world... It's quite easy to make just digital music and it's quite easy to make just human music, but to try and make a combination is sort of, exciting, I think."

The song was featured on the , episode of 's ""

The song was downloaded over 40,000 times in its first three days of availability.