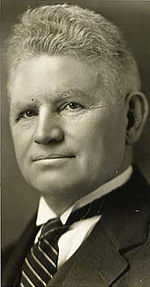 Frederick Melius Christiansen, the son of a Norwegian factory worker, was born in Eidsvold, municipality in Akershus county, Norway and emigrated to the United States at the age of 17. He settled in Washburn, Wisconsin. He studied at Augsburg College. In 1897, he returned to Europe to study three years at the Royal Conservatory of Music in Leipzig, Germany.[1]

In 1901, Christiansen was recruited by St. Olaf College president John N. Kildahl. The St. Olaf Choir was founded as an outgrowth of the St. John's Lutheran Church Choir in Northfield. For the next 30 years, Christiansen led the St. Olaf Choir, striving for perfect intonation, blend, diction and phrasing. He was a skilled conductor, directing bands and choirs alike. He assumed direction of the St. Olaf Band in 1903, and took the ensemble on tour to Norway in 1906 to play for King Haakon VII, making it the first college music ensemble to conduct a tour abroad. Though his first love was the violin, he received international fame as founding director of the St. Olaf Choir of St. Olaf College in Northfield, Minnesota, USA from 1912 to 1944. Christiansen was considered a pioneer in the art of a cappella (unaccompanied) choral music. Christiansen composed and arranged over 250 musical selections and his choral techniques were spread throughout the U.S. by St. Olaf graduates. The great Christiansen choral tradition is a recognized feature of American Lutheranism.

Four of Dr. Christiansen's children survived to adulthood each of them adding their own legacy to the Christiansen tradition of choral music in America.[2]