The Best and the Rest

The Best and the Rest 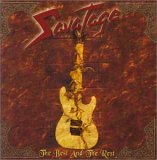 "The Best and the Rest" is a greatest hits album by that was released on November 21, 1997 by JVC Records in Japan. The majority of the tracks were selected as part of a reader's vote promotion in the Japanese hard rock magazine, Burrn!

The booklet for the album contains lyrics, Japanese translations of the lyrics, liner notes by Savatage producer/songwriter Paul O'Neill, a band biography, and a Savatage discography.

Voyage is a solo instrumental composition written and performed acoustically by guitarist Al Pitrelli. It was recorded during studio sessions for The Wake of Magellan (1997/1998).

Desiree is an acoustic track with a piano and Zak on vocals. Originally written for the Streets album, it was cut when the record was trimmed to a single disc format. This version was re-recorded in the summer of 1997, it is also featured on the German Streets re-issue.

All That I Bleed is a previously unreleased acoustic track that is performed by Jon Oliva singing and playing piano. This version was recorded in the summer of 1997, it is also featured as the bonus track on the German Gutter Ballet re-issue. The original was release on Edge of Thorns in 1993 with Zak Stevens on vocals).