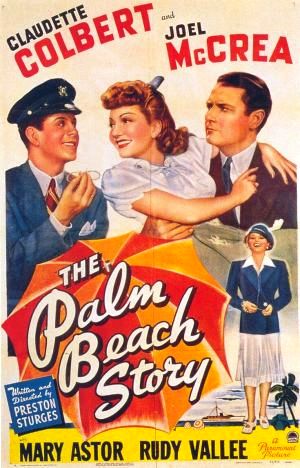 "The Palm Beach Story" is a fy|1942 romantic film written and directed by , and starring , , and . contributed the lively musical score, including a fastpaced variation of "" for the opening scenes. Typical for a Sturges movie, the pacing and dialogue of "The Palm Beach Story" are very fast.

Thomas and Geraldine Jeffers ( and ) are a married couple in who love each other, but are down on their luck financially. Gerry decides that Tom would be better off if they split up, so she packs her bags, borrows some money from The Wienie King (Robert Dudley), a strange but rich little man who's stopped by because he's thinking of renting the Jeffers' apartment, and boards a train for , , to establish residency in anticipation of a divorce, and in the hope of meeting a wealthy second husband who can help Tom. On the train, she meets the eccentric John D. Hackensacker III (), one of the richest men in the world (whose name is reminiscent of 's).

Because of an encounter with the wild and drunken millionaire members of the "Ale and Quail" hunting club, Gerry loses all her luggage and, after making do with clothing scrounged from other passengers, is forced to accept Hackensacker's charity, which turns out to be extravagant. They leave the train and go on a massive shopping spree for everything from lingere to jewelry &ndash; Hackensacker minutely noting the cost of everything in a little notebook, which he never bothers to add up &ndash; and make the remainder of the trip to Palm Beach on Hackensacker's yacht.

In the antic manner of their namesakes Tom and Jerry, Tom follows Gerry to Palm Beach by air, also with the impromptu financial assistance of The Wienie King. When Tom meets Hackensacker, Gerry introduces him as her brother, giving him the improbable name "Captain McGlew". Soon, Hackensacker falls for Gerry, while his often-married, man-hungry sister, Princess Centimillia (), chases Tom, much to the distress of her last lover, Toto (), who's still following her around. To help further his suit with Gerry, Hackensacker agrees to invest in Tom's grand masterpiece, a scheme to build an airport suspended over a city by wires.

Tom finally persuades Gerry to give their marriage another chance, and they confess their masquerade to their disappointed suitors. Even though he's disappointed, Hackensacker intends to go through with his investment in the suspended airport, since he thinks it's a good business deal, and he never lets anything get in the way of business. Then, when Tom and Gerry let slip that they met because they are both identical twins &ndash; a fact which somewhat explains the opening sequence of the film, which until now has not been referred to [The significance and meaning of the wedding montage which opens the film has been debated at length. TCM [http://www.tcm.com/tcmdb/title.jsp?stid=86154&category=Notes Notes] ] &ndash; Hackensacker and his sister are elated. The final scene shows Hackensacker and Gerry's sister, and the Princess and Tom's brother, getting married.

The film ends with the words: "And they lived happily ever after...or did they?"

(The rather obscure meaning of the opening is explained by the fact that both Tom and Geraldine are from sets of identical twins and there was a successful attempt to stop Gerry's sister from marrying Tom...Gerry got him instead.)

At least of the initial inspiration for "The Palm Beach Story" may have come to from close to home, since his ex-wife, Eleanor Hutton, was an heiress who moved among the European aristocracy, and was once wooed by Prince Jerome Rospigliosi-Gioeni, among others. And Sturges himself had shuttled back and forth between Europe and America as a young man. Indeed one incident in film is based on something which happened to Sturges and his mother while traveling by train to Paris, when the car with their compartment was unhitched while they were eating dinner two cars away.

The story Sturges came up with had the title "Is Marriage Necessary", and this, along with an alternative, "Is That Bad?", became a working title for the film. Unfortunately, "Is Marriage Necessary?" was rejected by the censors of the , who also rejected the script that Paramount submitted to them because of its "sex suggestive situations...and dialogue." Changes were made, but the Hays Office continued to reject the script because of its "light treatment of marriage and divorce" and because of similarities between the "John D. Hackensacker III" character and . More changes were made, including reducing the number of Princess Centimillia's previous marriages from eight to three (plus two annulments), before the script finally was approved.

The cast Sturges assembled for the film was not che