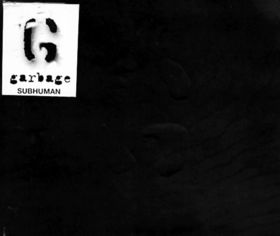 "Subhuman" is a song by band Garbage, released as their second single in 1995, exclusively in the . released the song commercially as they felt it was a strong single, having previously been a to Garbage's debut single "Vow".

"Subhuman" was used to massively raise general awareness of the band without exhausting potential singles from the scheduled debut "Garbage" and as an to brand the "G" by using plain white , , carrier bags, and subway , all emblazoned with the band's "G" logo in black.

"Subhuman" was written and recorded between March, 1994 and May, 1995 during sessions between band members , , and in either Marker's basement or at their own in university town Madison. ["Q" (issue 09/01/1996)" (Retrieved - -)] The band has kept the story behind the song ambiguous, although Erikson has said that the "burn down all your idols", the first line of the song "pretty much sums it up". [", as quoted on "Modern Rock Live" (Retrieved )]

"Subhuman" was initially released as a on international pressings of preceding single "Vow". Mushroom Records felt that "Subhuman" was a strong single, despite the song only ever being intended as a b-side. The behind the single was to use a release with special , like they had with "Vow", to massively raise band awareness; and depending on , a chart position within the Top 75. No for "Subhuman" was made, but instead Mushroom used the "Vow" promo video to promote the single.

On , "Subhuman" was released on , and featuring debut single "Vow" as a , for greater impact. The vinyl format for "Subhuman" was packaged in a black plasticised wallet (the original idea had been to make the sleeve from ), and both formats were limited to 3,000 copies each. Both sold out within the week.

The debut album, "Garbage", was released the following month, although the lead single was changed following the release of "Subhuman", from "Queer" to "".

"" were severely critical of "Subhuman", stating that the single was a disappointing follow up to "Vow": "Garbage go and ruin it all by being hopelessly techno-gothic. The end result is a song plagued by its own earnestness... it more or less self-destructs." ["", Single reviews, August 5, 1995 issue (Retrieved -)]