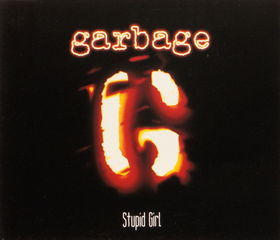 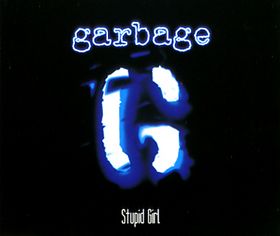 "Stupid Girl" is a song by Garbage, released as a single in 1996, taken from their 1995 self-titled debut album. It became Garbage's highest charting single in many territories, including in the US and in the , where it peaked at #4. It's success was driven by an innovative and cutting-edge which gained massive across the world.

The success of "Stupid Girl" propelled sales of parent album "Garbage" into the top twenty of the and into the top ten. In the song was nominated for for Best Rock Song and Best Rock Performance By A Duo Or Group.

Written by Garbage members , , and , the song is based upon a sample from 's hit "", whose writers and Mick Jones were given a co-writing credit for the song.

In , "Stupid Girl" was remastered and included on Garbage's album "".

"Stupid Girl" began as a rough demo in January 1994, during sessions between Vig, Erikson and Marker in Marker's basement in Madison, . ["Q" (issue 09/01/1996)" (Retrieved - -)] The band had been jamming with numerous instruments, an eight-track and samplers. Marker created the , while Erikson wrote a jangly , reminiscent of the guitar signature from 's ''. The whole song came together when Vig brought both parts together over a drum sample from The Clash's "Train In Vain".

After saw Manson's group Angelfish on "", the band invited her to Vig and Marker's to sing on a couple of tracks. After a dreadful first , she returned to Angelfish.

"Stupid Girl" was first released in and as a two-part set. Spread across both formats were "Queer" remixes and studio tracks "Trip My Wire" and "Butterfly Collector", previously included on the U.K. release of "Queer".

The release of "Stupid Girl" in the UK was scheduled for to support Garbage's first headline U.K. tour.

Continuing their theme of releases, Mushroom chose to release the "Stupid Girl" vinyl in a fabric sleeve. Two colours, red and blue, were released, each with a plastic "G" logo stitched on the front. This vinyl was limited to 10,000 copies. The CD single release was a two disc set, featuring b-sides "Driving Lesson", "Alien Sex Fiend", a Garbage remix of "Dog New Tricks" and remixes of "Stupid Girl" by Red Snapper and .

The album, "Garbage", ascended the as the success of the single saw its sales increase, and on it was certified platinum for 1,000,000 sales.

"Stupid Girl" was released in in August, as Garbage returned to Europe to perform at , reaching #36, becoming their first hit there. The single was also re-released in featuring an exclusive by Oliver Sitl. An Remix E.P. was released in Australia and New Zealand, featuring the Dreadzone and Red Snapper mixes, and "Alien Sex Fiend"

On the intro, four bars set the , adorned by only a -slide and audio effects. The verse adds Manson's vocals and a bass which uses flattened blues notes to give "Stupid Girl" an feel. The eight-bar prechorus abruptly cuts in with and sampled replaces the bass which drops out. This, coupled with Manson singing high in her range, creates tension and enables the presence of the bass to be felt when it re-enters on the chorus. The guitar figures in the bridge include a phrase played low and rhythmic guitar stabs on the opposite side of the audio mix. On the chorus, Manson's main vocal is answered by an "aah-ah" of voice and together. The word "girl" lands on a flattened bass note ( against the F# chord, instead of ). [""Stupid Girl": How the Garbage hit single is constructed", The Band, May 1998. Retrieved -]

, the band's third video in a row to be guaranteed heavy airplay on the network.

The video for "Stupid Girl" is a performance piece, inspired by the from 's 1995 movie "".

The "Stupid Girl" video was first commercially released on and on 's "", along with "making of" footage.

Garbage recorded a number of tracks in January 1996 during rehearsals for their first full-length . [""The Bin Crowd", "" magazine, May 1996 issue (Retrieved -)] During the rehearsals, Garbage remixed their own "Dog New Tricks", from "Garbage",

On , , Garbage, and would promote a live from Garbage's show at Dallas Bronco Bowl by offering a free of "Driving Lesson". The song registered over 6,000 downloads.

For the initial single release of "Stupid Girl", remixes were commissioned from Dreadzone, who completed two mixes and Red Snapper. All three versions appeared on the CD singles for "Stupid Girl" (the Red Snapper remix also appeared on European release of "Only Happy When It Rains"). [citeweb | url=http://www.garbage-discography.co.uk/ohwir_discography.php | title="Garbage: "Only Happy When It Rains" discography" | publisher=Garbage-discography.co.uk | accessdate=2008-02-26] An instrumental version of the Red Snapper remix was later released on the compilation "Big Beat Elite". [citeweb | url=http://www.discogs.com/release/70919
title="Various: "Big Beat Elite") | publisher=Discogs.com | accessdate=2008-02-25]

For the U.S. release of "Stupid Girl", the song was remixed for clubs by , ("Future Retro mix") and , Bruno Guez and Blue ("Shoegazer mix"). Todd Terry completed two remixes for club play ("Freeze Club" and "In-House Dub") while his "Tee's Radio mix" was released to Top 40 radio. Both this remix and Danny Saber's were later released internationally on "Milk". [citeweb | url=http://www.garbage-discography.co.uk/milk_discography.php | title="Garbage: "Milk" discography" | publisher=Garbage-discography.co.uk | accessdate=2008-02-26]

Red Snapper and Danny Saber's remixes were then used on "Garbage Video", while two additional remixes from Todd Terry ("Bonus Beats" and "Capella") were released in on the "Stupid Girl Remixes" 12" in the U.K. In 2007, Todd Terry's radio mix was remastered and included on the "Absolute Garbage" bonus disc "Garbage Mixes".