The top of the mountain has a PTTK tourist Mountain hut, a TV and radio mast, church Mary, poorly visible ruins of the castle and observation tower. The mountain and its surrounding region form the protected area called Ślęża Landscape Park. 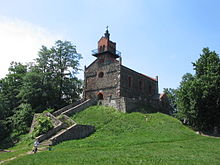 The church at the top

During the Neolithic Period and at least as far back as the 7th century BC Mount Ślęża (Zobten) was a holy place of the heathen tribes of the Lusatian culture.[citation needed] It was then settled by the Celtic-Germanic Lugians[citation needed] The Silingi, a subpopulation of the East Germanic tribe known as the Vandals are the earliest inhabitants of Silesia known by their name, however the greater part of them moved westwards by the 5th century A.D. and the remainder were slowly replaced in the 6th century by Slavic tribes ("people of the plain").[1] The Silingi were part of the Przeworsk culture[citation needed] The name of the territory Silesia either derives from the Sleza River, or from Mount Ślęża.[2] The hill itself was a religious center of the Silingi, and derives its name from them.[2][3]

The slavic Ślężanie tribe settled in the area when Silesia became a part of Greater Moravia, and then of Bohemia (part of the Holy Roman Empire). Duke Boleslaw I of Poland, a fiefholder of the Holy Roman Empire, conquered Silesia in the 990s, but lost it again to Bohemia, also a part of the empire. As Silencia, recorded by Thietmar of Merseburg, or Silesia, the Latin version, was in earlier German sources written as Slesia, from which developed the High German version Schlesien. Christianity came first via Cyril and Methodius and Regensburg, then in the 10th century Bohemia received a bishopric, Prague, which was subject to the archbishopric of Mainz.

Mount Zobten/Sleza has ancient Germanic holy places dedicated to a sun deity, and remained a holy place during Christian times as well. In the first half of the 12th century, the owner of the place was Danish Peter Wlast Dunin, (Polish: Piotr Włostowic), who founded there an Augustinian convent which was subsequently moved to Wrocław in 1153.

In 1148 the mountain is recorded as Mons Silecii. 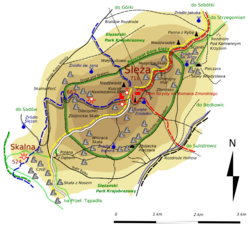 Peak part of the mountain

The Silesians may have been named after the Silingi, though this etymology is disputed; the word is perhaps derived from a Silesian word meaning "wet swampy place".

Ślęża in art and culture

On Ślęża there is a facility for FM- and TV-transmission, which uses a 136 metre tall free-standing (with additional guying) lattice tower. The current tower which was built in 1972 replaced a 98 metre tall tower built in 1957, which was partially guyed.