Demographics of Libya include population density, ethnicity, education level, health of the populace, economic status, religious affiliations and other aspects of the Libyan population.

No complete population or vital statistics registration exists in Libya. The estimates in this article are from the 2010 Revision of the World Population Prospects which was prepared by the Population Division of the Department of Economic and Social Affairs of the United Nations Secretariat, unless otherwise indicated. [1] 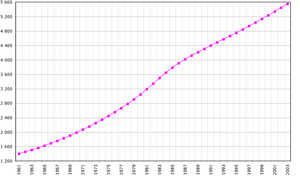 Demographics of Libya, Data of FAO, year 2006; Number of inhabitants in thousands. to see the latest information, please visit this official site: http://www.gait.gov.ly/info/info2.htm 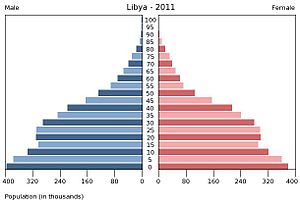 Population pyramid for Libya in 2011. 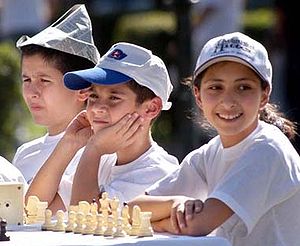 Libya has a small population residing in a large land area. Population density is about 50 persons per km² (130/sq. mi.) in the two northern regions of Tripolitania and Cyrenaica, but falls to less than one person per km² (2.6/sq. mi.) elsewhere. Ninety percent of the people live in less than 10% of the area, primarily along the coast. About 88% of the population is urban, mostly concentrated in the three largest cities, Tripoli, Misrata and Benghazi. Thirty percent of the population is estimated to be under the age of 15, but this proportion has decreased considerably during the past decades.

During the past 60 years the demographic situation of Libya changed considerably. Since the 1950s, life expectancy increased steadily and the infant mortality rates decreased. As the fertility rates remained high until the 1980s (the number of births tripled between 1950-55 and 1980-85), population growth was very high for three decades. However, after 1985 a fast decrease in fertility was observed from over 7 children per woman in the beginning of the 1980s to less than 3 in 2005-2010. Because of this decrease in fertility the population growth slowed down and also the proportion of Libyans under the age of 15 decreased from 47% in 1985 to 30% in 2010. 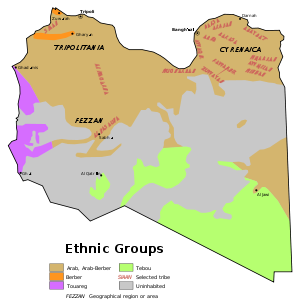 The native population of Libya is primarily Arab or a mixture of Arab-Berber ethnicities, with a small minority of Berber-speaking tribal groups and small black African groups like Tuareg and Tebu tribes can be found in southern Libya, which are nomadic or semi-nomadic. Most of the Libyans claim descent from the Bedouin Arab tribes of the Banu Hilal and the Banu Sulaym, who invaded the Maghrib in the 11th century. There is also some Punic admixture, and a curious traditional element from the Romanized Punics such as the Roman toga can be seen in Tripoli's people and was used by Muammar Gaddafi himself.

In the west of the country, there are some Tuareg nomads, mobile across the Libyan-Algerian border. Tuaregs are also scattered over Algeria, Mali, Niger and Burkina Faso.

In the southeast, there are small populations of the Nilo-Saharan Toubou, although they occupy between a quarter and a third of the country, and who also inhabit Niger and Chad.

Among foreign residents, the largest groups are from other African nations, including citizens of other North African nations (primarily Egyptians) as well as sub-Saharan Africans.

Foreign population is estimated at 3%, mostly migrant workers in the oil industry from Tunisia and Egypt, but also including small numbers Greeks, Maltese, Italians, Pakistanis, Turks, Indians and people from former Yugoslavia. Due to the 2011 Libyan civil war, most of these migrant workers have returned to their homelands or simply left the country for a different one.

Almost all Libyans are Sunni Muslim. 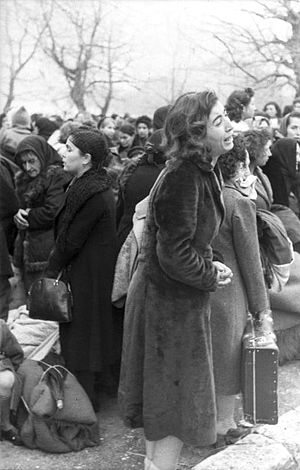 Foreigners contribute very little Christian presence, but there are some churches. A small Jewish community historically lived in Libya since antiquity (see history of the Jews in Libya), but the entire Jewish community in Libya eventually fled the country for Italy, Israel, or the United States, particularly after anti-Jewish riots in the wake of the 1967 Six-Day War between Egypt and Israel.